As a follow-up to last week's post about the decline of nudity in movies tracking the overall decline in cultural wildness (including the crime rate), let's look at what ratings the top 10 movies at the box office have had over the same time period (click to enlarge): 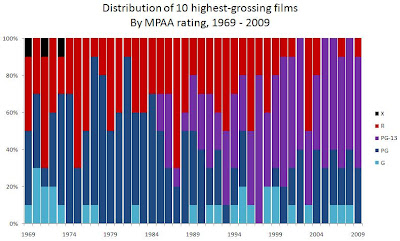 Back before the sexual counter-revolution of the early 1990s, there were three years where an X-rated movie broke into the top 10: 1969 with Midnight Cowboy, 1971 with A Clockwork Orange, and 1973 with Last Tango in Paris. Chances of that happening in the age of Barney the Dinosaur and Harry Potter? Zero. (1973 was also noteworthy for the #1 spot being held by a horror movie, The Exorcist.) At the other extreme, G-rated movies don't seem to show a strong pattern over time, probably because their target audience can't voice an opinion about what they want to see. There's some roughly constant share of box office dollars that parents shell out to take their toddlers to the movies, whether they like it or not.

The two big changes are the decline of R-rated movies starting in the late '80s or early '90s, and PG-13 replacing PG as the typical not-quite-R rating. The second change isn't hard to understand, since a lot of those earlier PG-rated movies have a decent amount of blood, gore, "sexual situations" as they're called, and so on. Once a more fine-grained rating came out, some movies that would have been rated PG before remained that way, but a good deal of others got PG-13.

The disappearance of R-rated movies is apparent already by the late '80s / early '90s but is overwhelmingly clear from 1995 onward, when most years have 2 or fewer R movies in the top 10, in contrast to only a handful of rising-crime years that have a small number of R movies. Indeed, during the falling-crime years after 1992, there are four years where not even a single blockbuster was rated R (let alone X) -- 2002, 2005, 2006, and 2008.

This vanishing of R and X-rated movies, and their replacement with PG-13 movies, is another example of greater cultural homogeneity during safer times, which I illustrated in the post below about hair styles. These days, movies are so neutered in what they can show because the audience's tastes have shifted so strongly in a "don't go there" direction. When the world gets more dangerous, people relax that disapproval because the order of the universe looks like it's coming undone and how else can we figure a way through it unless we explore a lot more of the cultural frontier to give us some ideas? Trial-and-error can't work if you aren't willing to experiment in the first place.

Also, when the future looks more violent, you don't expect to live as long, so you discount the harm to your reputation from going to see and raving about R or X-rated movies. When the world gets safer, your care more about your long-term reputation and start worrying more about what other people will think if you give them reason to believe you're the type of person who likes R-rated movies more than the socially approved PG-13 alternatives.

It's too bad that there was never a rating board for plays, novels, or poetry, or else we could have done a much deeper historical survey. Still, if movie versions were made that the author would approve of, you can bet there would've been a lot more R and X-rated movies during the previous three major periods of rising crime -- the later 14th C (just look at the Pasolini adaptations of The Canterbury Tales and Decameron), the Elizabethan/Jacobean period of ca. 1580 to 1630, and the Gothic/Romantic period of ca. 1780 to 1830. They've got it all -- body counts, violating sexual taboos, gory or grotesque characters, demonic influences on mankind, you name it -- not to mention a suite of forces opposed to these, creating a more apocalyptic atmosphere. And on the other hand, you would have seen more PG or at most PG-13 movies from the falling-crime periods in between, exemplified by Renaissance Humanism, the Age of Reason, and the Victorian era.

Based on the universal popularity of the Bible and Shakespeare, it seems clear which type of movies will endure as classics.