How to avoid the freshman 15 -- low-carb

Returning to the topic of what causes the freshman 15 (see here and here), it breaks my heart to see cute girls' looks go to hell because of their diet. One of my undergrad chick friends started off her freshman year eating at the dining hall (where she tracked me down, and we became friends). She is naturally quite slim, and I know first-hand that she ate lots of animal products and little junk. Then last year she went off meal plan and started eating what you might expect a dorm suite full of 19 year-old girls these days would fix themselves (lots of processed carbs). Plus she started drinking beer.

I could post the Facebook photos to prove it, if I were really cruel, but suffice it to say that she went from very cute to attractive but semi-chubby. Fortunately, during the summer she's been at home being fed a better diet by her mother, and when I first ran into her at the mall, she looked like her old self again. (We'll see what happens this school year...)

Today I got one of those endless Facebook notices that so-and-so, a former tutoree of mine, uploaded new photos -- but this time I paid attention since one thumbnail showed what she and her roommates were fixing for dinner: 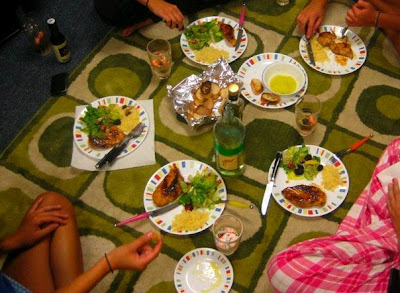 There's only a small amount of bread being split between the four or five of them. Granted, there appears to be some foul noodle or rice business going on, but it's far less than the fifty bowls of ramen that many college students eat in an afternoon, let alone how much you'd get at a Chinese take-out. Most of their meal is a dead animal with low-carb vegetables, both smothered in fat (olive oil and maybe something else). Judging from the rest of the album, none are the slightest bit chubby and have clear, firm skin and lustrous hair. And they all have delightful facial expressions and look as mentally well-balanced as sophomore girls can hope to be. My other friend's suitemates from last year are pretty foul-mouthed and even more foul-tempered; one has a beer belly and another is quite overweight.

They're the lucky ones. You can picture what might happen to your appearance and the vibes you give off if you ate cereal as a main meal and as dessert too. But for those with poor imaginations: 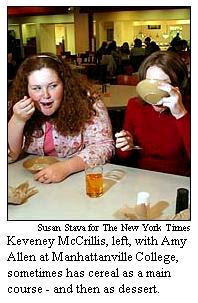