Why French, Spanish, and Italian women now look even better than ours

One thing that caught my attention in Gary Taubes' Good Calories, Bad Calories is that in discussing how a high-carb diet, resulting in higher blood sugar levels, encourages the formation of Advanced Glycation Endproducts, he notes that collagen is particularly vulnerable to glycation.

Here's a study on rats fed lots of fructose. These collagen AGEs ends up prematurely aging your skin. And here's a study suggesting that the damage is not reversible by following a low-carb diet, although it can prevent further damage.

This is why our celebrities look so weird. By abandoning most protein and fat, they end up gorging on things that ultimately sap their flesh of its bounciness. And of course 90 minutes a day of exercise and weight training is de rigueur, so they end up having these sharp boney bodies with Saran Wrap skin draped over top.

Taubes also points out that aside from the French, who have eaten high-fat / low-carb diets for awhile, within the past several decades the Spanish, Italian, and Swiss have done so too (with attendant drops in heart disease). Now that he mentions it, when I lived in Barcelona, I noticed far many more xarcuteries than bakeries or pastry shops. So much for the Mediterranean diet -- 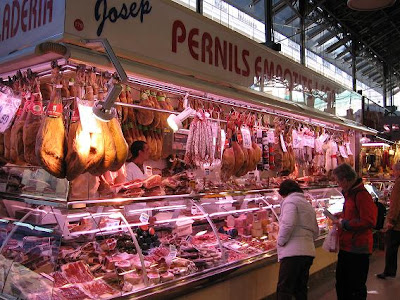 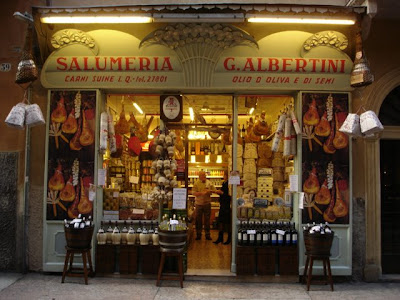 At Whole Foods, they love to brag about how European they are -- every package says something about the contents' role in a "European tradition." But it's breads, hot chocolate, pastas, and so on. The focal points of the store are their enormous fruit and vegetable jungle, together with the bakery. There's no attention given to fatty meats at all -- lean salmon at most. (A deli worker did a triple take when I asked for the entire 2.8-pound stick of genoa salami.)

Back in the Mediterranean, for example in the vast grocery section of the Spanish superstore El Corte Ingles, the crowning glory is the meat and cheese section, as the above pictures hint at, only it's more dazzling.

French, Spanish, and Italian women are better looking than Anglo women for genetic reasons, owing to different selection pressures (such as pathogen load, which leads to greater selection for good genes). But as though that weren't enough, they've also got superior diets to help slow the aging of their skin, and of their bodies in general.

A corrollary is that good looks in America are much more reliable signals of having good genes, since we eat a more uglifying diet than the French, and so have our genes put to a stronger test. Some fraction of ugly or average-looking women in France have their ugly genes masked by the effect of their diet. It's like in India, where the strong test is pathogen load -- anyone who comes out of that hellhole looking good has been genetically blessed, without a doubt.