Whiteness of states and their social capital

This is probably like a Pythagorean Theorem of sociology, so I don't claim the finding is original. Robert Putnam's Bowling Alone website has lots of free data, and at the bottom is a list of states and their social capital indexes -- basically, how socially cohesive communities are in that state. It jumps out at you, but here's a scatter-plot just to convince you: 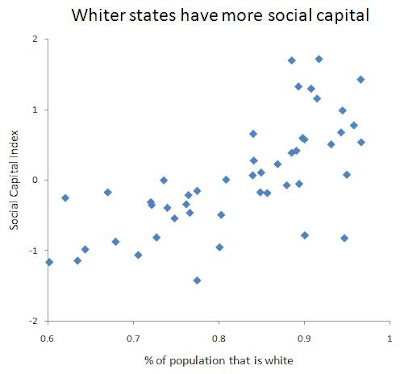 The Spearman rank correlation is +0.72, p less than 10^-6. He later showed that greater ethnic diversity predicted lower trust in neighborhoods, so he surely noticed this pattern earlier. I haven't read the book, so it may even be in there.