This week it snowed fairly heavily. On my way to campus, I couldn't believe I saw someone braving the possible accusations of stuffiness by bringing an umbrella. But he -- a grown man -- compensated for it by wearing Bermuda shorts and knee-high socks, in the middle of the snowfall, and a windbreaker instead of a coat.

Still, I've yet to see someone top the guy last year who, while it was snowing so hard that you couldn't see 30 feet ahead, wore loose athletic shorts, ankle socks, sneakers, and a hoodie. You can look informal -- I'll look non-hypothermic. 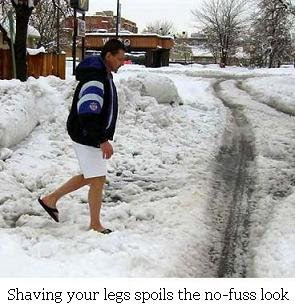 Shabby people pride themselves on not following fashion, but they're kidding themselves. They're slaves to their own silly trends, like shorts during a blizzard. If they valued usefulness and comfort, they'd be bundled up, not stripped down -- all to convince the crowd that they're an authentic, organic commoner.

When they bury their hands into their pockets to avoid frostbite, offer them your gloves and watch how anxious they get. They cherish their street cred more than an indie rock geek who refuses to borrow your iPod because it has some Metallica on it -- "what if someone saw?" Wearing gloves in winter would be like when their mom forced them to put on that stupid bike helmet when all my friends were looking.

If you're like me and your Christmas shopping plan is to just loot the mall while it's a complete ghost town, here are three simple things you might pick up, which I couldn't survive the winter without:

* Thermal underwear from American Apparel. The most comfortable kind I've ever worn. Not too prole, yet not too fabulous.

* Angora scarf from J. Crew. According to Alan Flusser, having light skin and dark hair, I need something with a bold pattern and high light-dark contrast near my face.

* Umbrella from Brooks Brothers. Go ahead -- be an asshole and take up lots of space. Those collapsable ones are so small that they barely cover you -- might as well just hold a newspaper over your head. Recession-time bonus: this is the cheapest stick umbrella I could find.