The idea that kids these days don't want to grow up, but instead remain irresponsible adolescents, is wrong. I've already shown that young people are OK with 14 - 16 year-olds growing up by having sex, while older people want them to wait forever to make that transition. In fact, 18 year-olds would gladly surrender their iPods and digital cameras if it meant they could live in "my own apartment" with "my own stuff" -- omg, that would be like SO rad. (I don't know if they'd trade in their cell phone or Facebook, though.) That's why college students try to move off-campus, buy their own home decorations, and cook their own food as soon as they can.

In 2002, the GSS asked respondents by what age a person should have made a variety of transitions to adulthood -- getting married, working full-time, etc. To get decent sample sizes (more than 40 people), I've pooled people into six-year age groups, each one represented by the halfway point: 20.5, 26.5, 32.5, 38.5, 44.5, 50.5, 56.5, 62.5, and 68.5. Below is a series of graphs that show the percent of a certain age group that thinks young people should grow up "fast." One answer is given by most people, so I consider "young" to be any answer before that age. For example, across all age groups, the most common response to "when should people get married?" is 25. So, I count any answer below 25 as "getting married young." 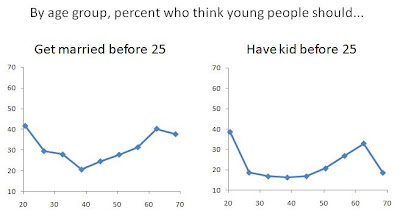 For "being able to support a family," the "grow up fast" responses are pretty constant across age groups, except for the very oldest respondents. For all other major adult transitions, the "grow up fast" responses decline as you go from college-aged people to middle-aged people. For some, the oldest respondents are actually more in agreement with the whippersnappers than with the middle-aged. Because the question was only asked once, I can't separate age effects from generation effects.

None of the responses reflects narcissism or materialism -- they are about real adult responsibilities -- moving out on your own, working, having children, and so on. So it's just false that young people would prefer to enjoy the benefits of adulthood without paying the costs, e.g. by sponging off of their parents while having their own car, no curfew, etc. Most young people find it humiliating to live at home past a certain age -- broadcasting to everyone in their larger social group that they've basically fucked up.

Call them cocky and reckless, but young people want to become adults as soon as possible, and they understand that you have to pay to play. It's hard to escape the conclusion that all of the talk about adolescents wanting to just play with their toys forever is the same old self-serving, fact-free, "kids these days" whining that aging people are prone to.

At the risk of spewing up psycho-babble, perhaps the Baby Boomers and Gen X-ers are simply projecting their own generation's anxieties about growing up onto a different age group. The youngest age group in the data here were 18 - 23 in 2002, and so were born between 1979 and 1984 -- too young to be Gen X, which ends with those born in 1978. This doesn't cover Millenials, who are born no farther back than 1987, but I recall the bitching and moaning about perpetual adolescents back in 2003, just a year after this survey was done.