Reading through some of the fashion advice in the Game manual Magic Bullets, I came across a proscription against multiple patterns:

The purpose of the book is not to help men dress better, only to interact more effectively with girls, so dumbed-down rules like this are fine in such a context. But it's really not that hard to wear different patterns, including two of the same type. To fully understand how to pull this off, your best bet is to get Alan Flusser's Dressing the Man, which has copious photographs and line drawings that illustrate the points made in the text.

The basic idea is that multiple patterns strain the eyes when they don't allow the viewer to easily draw borders between the different pieces of clothing. But there are simple ways around this obstacle. To mix two different patterns, just make sure they're not both small-scale, such as a narrow pinstripe and tiny houndstooth, since we would have to squint to tell which is which. Having one large-scale and the other small-scale requires no squinting, and even having two largish-scale patterns works because, when blown up, it's clear which pattern is which. Here's an example: 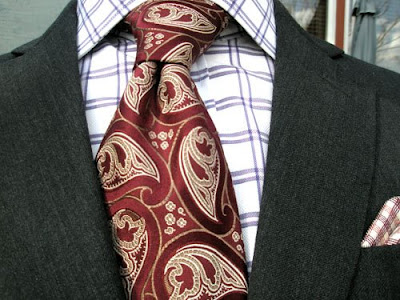 The checks on the shirt and the paisley shapes on the tie are large enough that you can easily distinguish them; also, checks have only straight lines, while paisley is made up of curves, also helping to separate them. The light-dark contrast only makes the borders clearer. Off to the side, the pocket square has very tiny checks that don't compete with those of the shirt. See? Mixing three patterns can be easy.

As for using two of the same pattern, again the key is to use very different scales so that one stands out clearly from the other. Here is a more eccentric example, using two stripes: 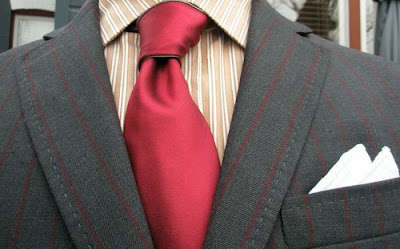 You could probably fit two-and-a-half to three of the tan stripes within one of the gray bands. More narrowly spaced lines appear farther away, so here we have a clear distinction based on depth between the shirt and sportcoat. And again, the light-dark contrast helps.

Men dress up as part of their strategy to get women, both in the male-male competition aspect -- where dressing more formally forces most males to defer to your will -- and the courtship of females aspect, where dressing with some flair increases your sex appeal. Your daytime clothes are mostly about dominating other males, since more formal clothing is one of the clearest non-verbal signals that you outrank another person, but mixing different patterns well gives your suit of armor some sexiness too.