Joker: the return of naturalism for the new Gilded Age (Part 1 on visual and musical style)

After one of my rare visits to the movie theater, I sided more with the audience than the critics on Joker. The movie may polarize responses because it's trying to integrate two different movies, one about his background and origin and another about his initial acts in his new criminal role as Joker. It wasn't the most seamless weaving together of the two narratives, but it did the job.

It may have also polarized responses for bringing such crystallized expectations to it -- choosing a protagonist from a high-profile franchise, and a director from a comedy rather than thriller background -- and then frustrating those who had showed up wanting something different. I've never paid much attention to comic book franchises, in film or elsewhere, and I haven't seen a single one of the Hangover movies in full, so I didn't go in with any hardened view of how it should have been.

I did see it after having read and listened to extensive spoilers, though, including endless comparisons to Taxi Driver (whether they enjoyed the supposed parallels or not). Joker bears little resemblance to Taxi Driver -- it's the contrasts that stand out more, and reveal the differences between the zeitgeists behind the two.

I'll split up my review into two parts, this one on the physical aspects of visual and musical style, and another on the conceptual aspects of themes, characters, and narrative style.

On the cinematography, it differed from the earlier Batman / Joker movies by Tim Burton and Christopher Nolan in opting for a more realistic than heavily stylized look. The cinematographer is mainly known for the Hangover movies as well, so this could have been making the best use of their limitations (comedy films rarely stand out visually). And certainly it's less stylized than the neo-Expressionist look of Taxi Driver's scenes of city streets at night. Joker rarely uses striking compositions, dynamic camera movement, bold colors, or chiaroscuro lighting.

The low-style visual approach reinforces the naturalistic themes, characters, and narrative. This is not a real comic book or superhero / supervillain movie, nor do the Joker's crimes rise to such a level that they seem unnatural and in need of a more stylized visual delivery.

In fact, the only memorable stylistic device is the frequent use of shallow focus, putting Arthur Fleck / Joker in focus, and rendering everyone and everything else blurry, even his immediate surroundings and people sitting right next to him. This choice was not just some fashionable gimmick, nor was it used for utilitarian purposes (e.g., to de-emphasize things and people in the background that might distract our attention from key figures in the foreground).

When he's sitting in bed with his mother watching a late night talk show, there is no clutter of distracting objects -- just him, his mother a foot away, the bed, and a few odd pieces of furniture and decoration. And yet everything other than Arthur is blurry. Ditto for the shot of him looking out the window of a bus -- there's little action going on in the foreground, and not much in the background either. This shot is echoed later when he's in the back of a cop car. So minimizing distractions is not the reason for the extreme shallow focus.

What this does is visually convey not only Arthur's loneliness and isolation from the people, things, and places in his world, but his psychic state of dissociation and increasingly solipsistic retreat into his own mind. After what he's been through, he has begun to live so much in his own mind that on a raw perceptual level, anything beyond himself is just one great big blur.

By the end of the movie, his dissociation has gotten so bad that he feels disembodied from even himself. In one of the movie's iconic shots, only his head remains in focus -- the entire rest of his body below the neck has floated off into the blurry background of the dressing room. Usually shallow focus at least respects the integrity of a subject's body, but here this is violated in order to show how far he has traveled off into a dissociative fugue. The promotional still below is not the best example from this sequence (it's most striking when he puts a gun under his chin), but it's not out on DVD to do a proper screenshot. 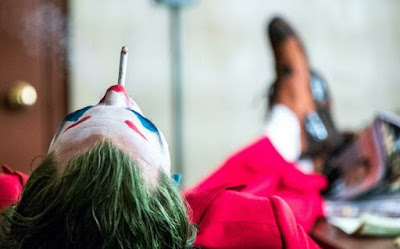 Thus, the heavy use of shallow focus does not undercut the otherwise realistic visual approach. It is not used for purely stylistic effect, to delight the visual sense, but to try to render as scientifically and objectively as possible the dissociative breakdown and solipsism of the protagonist.

Unlike the effective naturalistic visual approach, the musical style did not achieve its goals. This may owe to the comedic background of the team of filmmakers, where music tends to use existing pop songs or well-timed flourishes to echo a bit of physical comedy.

To its credit, it did not rely on contemporaneous hit songs, which Arthur would have been oblivious of. Nor did it employ a melodic approach to the score, which would have suggested dynamism, action, and coherent structure in a movie about the cold impersonal shaping effects of the environment on a person, and a slow dissociative melting-away rather than a series of psychotic explosions. (Contrast this with the heavily melodic and thrilling soundtrack to A Clockwork Orange, whose antisocial protagonist wields more agency and experiences more exciting events than that of Joker.)

This approach to the score is one of the few similarities to Taxi Driver, whose score is mostly simple variations on a single motif, and plodding dissonant harmonies. However, Joker's score is too dramatic, almost bombastic, in its energy levels for a movie that is not very dramatic. Taxi Driver's score is more appropriately moody, despite being more dramatic in its plot.

And the instrumentation for Joker is too orchestral, taking away from the movie's overall naturalistic approach. Taxi Driver used a Midcentury jazz arrangement that feels more at home in New York during the 1970s. Joker needed an arrangement that was softer and more informal. Perhaps an elevated take on the moody, mellow country-crossover music that was dominant throughout the '70s, leading up to the year that Joker is set in (1981). Not the most exciting genre or period of music, but it would have done the job better for this movie -- more plausible as the background for lower-class characters, and more evocative of the tone of pity, disappointment, and bleakness that pervades the plot (at least until the final act).

The use of "Rock and Roll Part 2" for Joker's triumphant dance was great -- drawing from a moody, emo period that is more simple riffs than full melodies (early '70s, glam), rather than other stadium hits like "We Are the Champions" that are too melodic and high-energy to fit into this movie.

There should have been a counterpart to this song in the earlier part of the movie, to set up a contrast with the triumphant final act. Keep it in the glam rock genre, to make the comparison obvious, but one that is more yearning and self-pitying. Not melodic, layers of droning instruments, and a final vocal layer that is just disembodied sighing, to suggest dissociation or disintegration. With lyrics about one's childhood. The perfect choice -- "Cosmic Dancer" by T. Rex (also hits on Arthur's penchant for dancing).