In going from director of photography to director, focus on action

When a cinematographer decides to try his hand at directing, his first film should probably not involve much narrative or conceptual complexity, given how heavily visual and visceral his training and experience have been.

During the late 1980s and early '90s, Jan de Bont brought style into the summer thriller genre by contrasting shadowy settings with bright, warm lights, usually from a neon or other artificial source. This choice made the chiaroscuro effect look and feel distinctly modern, showing that striking contrasts of light and dark are not the kind of thing that you could only see by carrying a torch through a cave, or lighting candles after sunset.

Go back and see how much more fascinating these movies look compared to the typical entries in their genre: Die Hard, Black Rain, Flatliners, The Hunt for Red October, and Basic Instinct.

When he took control as director in 1994, he chose a project whose source of drama can be summed up very simply: "Pop quiz, hotshot. There's a bomb on a bus. Once the bus goes 50 miles an hour, the bomb is armed. If it drops below 50, it blows up. What do you do? What do you do?"

Although the early scenes in Speed show de Bont's look and feel (see the top shot below), style alone cannot support an entire movie, and after those initial scenes there is little emphasis on striking lighting, color, shallow focus, and shot angles, except for the very end (see the bottom shot). 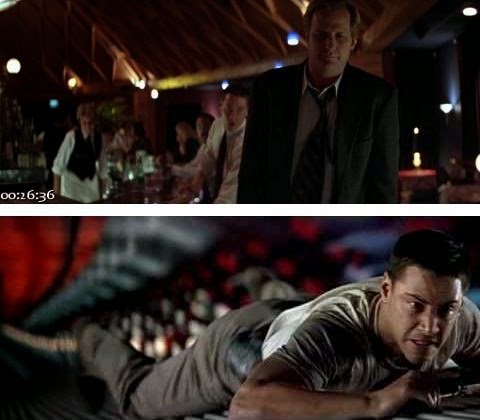 However, the focus does not shift toward dialog, concept, and character development. It sticks with the visual and visceral, with cookie-cutter character types, only in a way that can sustain our interest — creating a sense of panic and menace, and throwing obstacles in the way of the protagonist's attempts to regain control of the situation. That way we feel cathartic relief when he finally succeeds in escaping from the villain's trap and rescuing the hostages.

So, was de Bont successful at directing an edge-of-your-seat thriller flick? No doubt about it: my friends and I must have returned at least a dozen times to see it over the summer of '94. If there was ever a lull or uncertainty in the day's plans — "Wanna go see Speed again?" I watched it on DVD last summer and agreed with my teenage self, a rare exception when I re-evaluate the pop culture of my adolescence.

The point here is not to survey the successes and failures of every DP who has taken his turn at directing, but to detail a single relevant example from the not-too-distant past.

The relevance for today being the release of Transcendence, the directorial debut from Wally Pfister, whose eye has given the popular thrillers of Christopher Nolan their own striking chiaroscuro cinematography. I thought it was a provocative character study of the major players who will usher us into the techno-apocalypse, while bringing up a bunch of intriguing ideas about how things might unfold if a person's consciousness were uploaded to a computer and then to the entire internet. But it was not the gripping, edge-of-your-seat thriller that the ad campaign had led us to believe.

His efforts to explore characters and concepts proved much more successful than I had expected, given his background as a DP rather than as a screenwriter (a role that better prepares one for directing). Still, while they are rich enough to carry the movie, it lacks the heart-pounding action that allowed Speed to pull in the audience almost entirely without dialog and character arcs.

Pfister took a huge risk by shifting focus away from his comfort zone and toward the narrative, and exceeded my expectations. But I wish he would have taken a safer project, driven by action, for his first tour in the director's chair, and come around to a conceptual sci-fi narrative after becoming more comfortable with the director's role. Such a difficult changing of roles should not also unfold in unfamiliar territory.

Critics are heavily panning Transcendence, for reasons I don't get — perhaps it wasn't the nerd-gasm they were hoping for, or it came as such a downer following in the wake of Her, which reassured the critic nerd that it was cool to fantasize about using your iPhone as a sex aid, and that there was even something cheerful about the whole affair. Yeah sure, it was no Videodrome, but the 19% rating at Rotten Tomatoes is childish and shameful for the reviewers. It's like scrawling UGLY BITCH on a girl's locker just because the date wasn't as orgasmic as you'd imagined it would be.

I'll put up a review sometime later today to try to correct the major misunderstandings I've read. But there is a grain of truth in what the tone-deaf critics are whining about, and I figured an introductory post was worth it to explore why the movie was not as successful as other attempts by cinematographers as directors.