Recently I was looking through the ceramic mugs at the thrift store and found this one for 50 cents, which would cost between $10 and $20 on a "vintage" site like Etsy or even eBay: 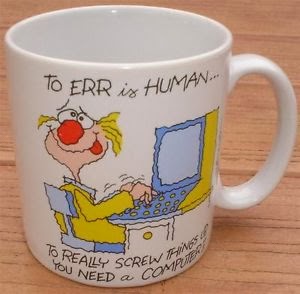 To err is human...
To really screw things up
You need a computer!

He doesn't just have a retarded look on his face, his head isn't even facing the computer while his twitchy fingers hammer at the keyboard. It's like someone hired the class clown for a respectable job. Here are some others from the same time and the same company (Russ Berrie, who oddly enough invented those Troll dolls for children):

"I'm expecting a great idea any minute now" (says a dude sitting on the can).

"I'm only here 'til I win the lottery" (says the guy with a messy desk).

"I love every inch of you... Some more than others!" (says the workplace bimbo).

Satirizing the seriousness of the workplace was a key part of adult life in the 1980s, along with the "xerox lore" posted here and there around the office -- spoofed memos, black humor cartoons, and the like. These were not internal thoughts or jokes around the water cooler, but pieces that were displayed openly around the office itself. 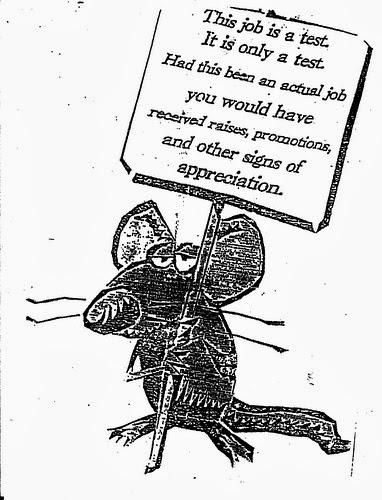 Alan Dundes and Carl Pagter published a series of books that collected a staggering and hilarious variety of "xerox lore." That was back when such things were popular, though. The first book came out in 1975 (and included items from somewhat earlier), and the last one in 2000. I thought the ones in this edition from 1987 were the funniest.

Technological changes don't account for its demise (email, the internet, etc.) -- folks these days are just a lot more conformist and authority-worshiping than they were in the irreverent Eighties. An office worker back then would not have contented themselves with just passing along a spoof in private, however they would have done that before email (passing notes, for grown-ups). They wanted it to be out in the open, to signal to everyone else that they weren't alone in their thinking, that it was OK for you to feel that way, and you should feel comfortable putting up your own defiant display. (A la the famous Solomon Asch conformity experiments.)

The coffee mugs of the '80s and early '90s were another prong of the overall attack on pretentious office culture. And they sure didn't vanish because of technological changes. People still have mugs around the office today, but they don't have text and images that take potshots at office life.

I noticed from reading through Dundes and Pagter's compilations that xerox lore started to move away from satirizing the office and bosses during the '90s. It moved more toward the themes of "people in general piss me off," or "my team is sensible and awesome, and the other team are clueless idiots." The best example of this, outside folk culture, was the comic strip Dilbert, where an egghead complains meekly that the suits don't appreciate his awesomeness. Really stickin' it to 'em...

When people enter a cocooning phase, they develop an auto-immune disorder where instead of attacking invasive parasites, they turn on the organ or body that they belong to, lacking a strong sense of what is self vs. not-self. When people interact more frequently with others (especially strangers), they develop a stronger sense of self vs. not-self, and the immune system functions well. Office workers asserted their dignity and solidarity with one another, and kept management and the workplace in general from stifling them on a day-to-day level.

What they were doing to their salaries, job security, etc. is another story, although that too was not as bad back then as it is now. I think management felt somewhat held in check by the widespread disregard for workplace authority in the '80s, that they didn't really start hosing their workers until the '90s and after, when the cocooning trend disconnected the workers and made them want to just keep to themselves. A divided workforce is an easily governed workforce.That goes beyond racial or ethnic diversity, as all-white parts of the country are also divided, atomized, and of the "don't rock the boat" mindset. Union-busting was not a factor either, as most workers were already not unionized. It was simply the cocooning behavior closing each of the workers off from the others.

That may have played a role in keeping labor agitation to a minimum during the Gilded Age or Victorian Era, another falling-crime / cocooning period, though also one where inequality was widening and the labor movement was trying to take off but could not. Once the crime rate and outgoing behavior started rising around the turn of the century, it became much more organized and serious. Class conflict peaked around WWI, after which both sides made concessions -- no violent agitation from workers, and better treatment and conditions from the elite. (And an end to immigration, whereby the soaring supply of labor had lowered wages.)

It's a good thing it ended when it did, since people only got more outgoing and rambunctious during the Roaring Twenties. They could have really turned up the heat by the start of the Great Depression, which was the peak of the extraverted Jazz Age culture.

I wouldn't expect to see much of a dent in the micro-managing norms of today's workplace until people leave their cocoons and start interacting with one another again. It takes a team effort to protect your dignity against managerial manipulations.