When societal cohesion begins to weaken, individuals begin looting public resources or otherwise trying to have some group of others foot the bill for one's own way of living. Only when cohesion is strong do people hold such parasitic behavior to be taboo.

The worst cases involve siphoning off funds intended for someone else.  Over the past 20 or so years, Americans have begun to do just that with the disability insurance program of the Social Security Administration. When you think of workers getting compensated for disabilities, you think of a construction worker getting knocked in the head by a careless crane operator, and being unable to work for awhile afterward.

It may have been that way once, but it is now mostly paying out benefits to people claiming to be disabled, not from injuries, congenital defects, or other accidents beyond their control, but from musculo-skeletal disorders and mental disorders. In practice, that means someone fat enough to feign or truly show back pain, and some con artist who gets a shrink to label the patient's dickwad behavior as a mood disorder. "Yeah, I suffer from intense anxiety when I think about going to work. Give me a check instead."

Not much of the change has to do with demographics, workplace safety, etc. (See here for a recent review.) It is simply a shift in the mentality of lower and lower-middle class Americans -- like, if the elites aren't going to look out for the little guy and just plunder the country for their own benefit, why shouldn't we find a system to game ourselves? It is a clear sign of how quickly trust and solidarity have unraveled since the 1990s.

How do we know it wasn't always so bad? People are always complaining about how fragmented the society became in the 1960s, and lasting forever after, to greater or lesser degrees. But in reality Americans kept getting closer to each other socially and culturally, and feeling more national pride, from the '60s through the '80s. As a result, they would have felt it to be the height of shamefulness to selfishly try to milk a federal insurance program meant to protect disabled workers.

Below is a graph showing the number of applications to the disability insurance program over time, controlling for the size of the population aged 20 to 59. (You can get the benefits if you're 18-64, but I have data already at hand on the basically same group of 20-59 year-olds.) I chose the number of applications, rather than number of awards, number of beneficiaries, amount of pay-outs, etc., to get as close as possible to the grassroots demand for these benefits. Whether an applicant ultimately gets an award also depends on the supply side at the SSA. Most others look at the number of beneficiaries, etc., because they're concerned with the unsustainability of the payment system, but I'm concerned with how likely people are just to stick their hand out in the first place. 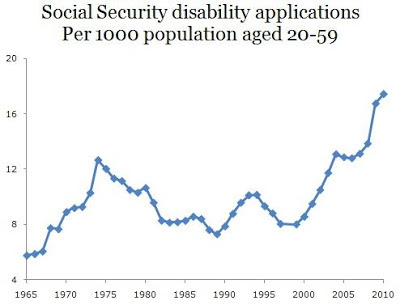 The first year of data for the program is usually 1960, but for some reason the SSA website only provided it back to 1965. In any case, the rate of applying more than doubled from near its inception in the early '60s through the first half of the '70s. I think a good amount of this is just a natural increase when a brand-new form of government insurance is offered. It takes time for the truly deserving to learn about it and feel secure enough to rely on it instead of alternatives, in case of accidents. The Occupational Safety and Health Administration only got going in 1971, so it's possible that there was a real rising need for disability benefits before then. Unfortunately the Bureau of Labor Statistics only has data on workplace accidents and fatalities back to the early '90s, so this is just a guess.

What's truly astonishing is the steady decline from a peak in 1974 to a bottom in 1989, a 42% drop. This period is known for the "Right Turn" in American politics, where even the lower-status citizens felt like they shouldn't rely so much on the government for support, unless they really needed it, because going on the dole made them feel ashamed and pitiful. Try to get support from sources that are meant more for you specifically, like your family and your church, and leave the national funds for someone else living who-knows-where who needs it more than you do.

And by some miracle, the later '70s and '80s did not see average Americans getting unusually poorer, sicker, or more miserable. I say "unusually" because eating more carbohydrates has caused a steady erosion of our heart health, not to mention cause the obesity and diabetes epidemic, but the period of falling selfishness did not do anything extra to worsen such trends. Inequality has also gotten steadily worse since the early '70s, but again the choice to refrain from milking the disability program did not send it soaring. If anything it looks like the early-mid-'90s saw a greater jump in the Gini coefficient. And anyway, the explosion in disability applications since the '90s has done nothing to reverse these trends in health and prosperity.

The graphs look more or less the same for the outcomes -- percent of some age group receiving disability benefits, etc. The graph on applications, though, shows that the swings up and down over time are not due only to changes on the governmental side, but also to the tide turning -- and then turning back again -- among my fellow Americans. In a democracy, we more or less get the policies that we ask for, so there's a whole population-level zeitgeist of rising or falling support for able-bodied people to sponge off of a disability program.

Finally, to return to the theme of an earlier post on the geography of selfishness as measured by Google searches for Black Friday deals, let's repeat that for searches for "social security disability". Darker means greater search volume, lighter means less.

Once more it looks like the power of the western frontier in American history lasts even through today. The solidarity of the eastern half of the country is roasted and toasted, whereas the Plains and Mountain states are doing OK. Don't be misled by the large colored areas in Utah and Arizona, since they're measuring searches in the Salt Lake City and Phoenix metro areas, not really all that territory shaded in.  Even the L.A. and San Francisco areas don't search as much as their blue-state brethren along the Bos-Wash corridor, Chicago, and Dallas (an increasingly liberal city since 2006).

Mapping out the percent of qualifying residents who actually receive, rather than search Google for, disability benefits would show the same rough picture, but the data are only at the state level and lack the resolution seen above. The only big difference I noticed was that selfish blue-staters relied more on dickwad behavior disorders, and selfish red-staters on lardass scooter-riding disorders, when holding out their hand to Uncle Sam.

As all other writers have pointed out, the program as it exists is unsustainable, but not because the government has been colonized by aliens bent on shelling out benefits to a public that did not ask for them. Rather the program cannot last because we no longer enjoy a national culture and resulting feeling of solidarity that would keep us from crossing the line of something held sacred. And again, the lower-status Americans feeding at the disability trough are only aping the behavior of their superiors, who can't import enough cheap labor, or seek bailouts when their risky investments blow up in their face.
Categories: Geography, Morality, Politics