Millennial childhood memories didn't record their own home, only what was on screens

Every year a post on Corningware or Corelle from the '50s - '70s does numbers on Twitter. Here is the latest one (h/t to Jack from TPN).

Those manufacturers kept making new patterns into the '80s and '90s, but I've never seen Millennials reminisce about them, the way Gen X-ers and Boomers do about the stuff they grew up with. (And have pieced back together in adulthood -- for me, that Corningware "spice of life" pattern shown in the tweet above [yep, I have that exact teapot], "butterfly gold" by Corelle, and "chablis" by Casual Elegance Hearthside. Nothing more cozy and familiar than these things, which you use every day.)

Maybe they don't like the '80s and '90s aesthetic per se, but I doubt it. I think they just got their minds warped by their helicopter parents sticking them in front of a screen all day long their whole lives. They didn't even notice the physical tangible items within their own household, unless it was also shown to them on a TV commercial or a Disney live-action movie.

Whereas we Gen X-ers remember all of that stuff from being plugged into real life, and in particular *other people's* lives, wandering from one home to another on a daily basis.

It can't be understated how Millennials' experiences of the world have been entirely mass-mediated, rather than derived from direct unmediated experience. See this recent post and the links to much older posts therein. Only in their 30s are they starting to venture out into the world and noticing what kinds of strange things are in it, that were never shown to them on TV, movies, video games, or internet memes.

So, they show no awareness of what the major visual tropes were, like plates and pots having salmon pink and teal green (or baby blue), or ducks and geese being put on everything. Contrast that to Gen X-ers who know that mushrooms were put on everything in the '70s, and that the yellow / orange / brown combination was everywhere.

Another example from household items -- you never hear Millennials talk about '90s furniture, even though it is highly distinctive. But Gen X-ers can easily tell you what '80s furniture or '70s or '60s furniture looked like, felt like, etc. Millennials had furniture in their homes, sat on it, slept on it, ate at it, all day, every day of their formative years. But it did not leave an impression in their memories because it wasn't sent through a screen.

The only exceptions there are things that were popular on a hit TV show, like "Woah, that looks like a Zack from Saved by the Bell blanket". Or, "This room looks like Clarissa Explains It All". It's not "My best friend had that exact blanket -- it's so '90s!" They never spent any time at other people's homes. But even their own home is a blank to them!

Sorry, but it's weird how no matter how much time I spend in thrift stores, I never see Millennials having a laugh about those over-the-top wacky patterns from '90s bedding and linens. They just walk right by them, not even a chuckle. You know which ones I'm talking about! 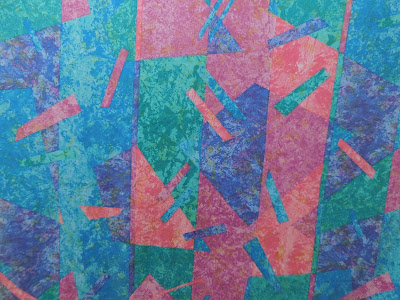 But these absolutely ubiquitous items, so unmistakably identified with kid-world during the American 1990s, just go right over their heads because they weren't prominently linked to a hit TV show, movie, etc. Contrast to every kid who grew up in the '70s talking about what their curtains, carpeting, etc. used to look like. You don't have to be a fan of it, or of furniture and home decor at all -- you just had to have experienced reality directly, because your parents let you roam freely, like natural human beings.

Since the '90s and 2000s have never received a proper revival in the mass media, Millennials and Zoomers cannot call up images of those decades as a whole, despite having lived through them. Whereas there has been a mass media revival or nostalgia for the '50s, '60s, '70s, and especially '80s -- so they can find something in a thrift store and say, "Wow, that teapot looks like it belongs in The Conjuring", or "That's such a Stranger Things shirt", or "Now there's a Mad Men chair..."

Common culture shared by all has died definitively since the usurper Biden stole his way into the White House. Common culture was already rocky during the 2010s, but was still unified and bipartisan. You didn't have to be left or right to be taking part in the ubiquitous '80s revival. Now, nobody wants to belong to a single national culture. So there will be no '90s or 2000s revival, like there was an '80s revival. No endless portrayals, with period accuracy, from media or entertainment. After all, a shared revival is still shared culture, even if it's not new culture.

And therefore, no way for the screen-mediated memories of post-X-er generations to identify everyday items from the '90s and after, even if they grew up with them in their own households.

To conclude, I have to emphasize that these have all been social changes, not technological ones. Their parents are the forces responsible for them having little contact with other households growing up, and for being stuck in front of screens within their own nuclear home. The TV set, VCR, computer monitor, and video game console, do not have agency of their own. They are just inanimate tools with no will of their own, employed by the parents to accomplish the goals of the parents -- keep kids from being contaminated by the dirty scary Outside World.

But being shut in all day, every day of a kid's life is not a sustainable situation. They're curious and need *some* kind of interaction with a place outside the home, and with people or other characters outside their home. Enter the mass media. Suddenly they can leave the environment and cast of characters from their own home, and get some outside stimulation. But in so doing, the helicopter parents have sewn their kids' eyes shut to even their own home, not to mention the rest of the real world, and programmed their kids' brains to equate what it shown through screens with reality.

It's not the nature or essence of these technological devices that has this effect. Gen X-ers grew up with radio, TV, movies, and video games -- but that was only a tiny slice of the sensory input for our developing brains, most of which was IRL and unmediated and social and outside the damn home. That's because our parents were different from those of Millennials and Zoomers. They had different goals, different styles of parenting, and therefore they used these devices differently on us -- letting them be there for occasional distraction, but not parking us in front of them all day, telling us that it was better than venturing outside the safety of home where there might be bad influences (AKA your neighbors and community).

Some time sooner than later, the young generation is going to start ditching the online media and living more of their lives unmediated and IRL. Maybe Gen Alpha, or the next after them. And in 10-20 years, young people will be making fun of the middle-aged geezers who are still stuck to their dorky handheld computers ("phones"), instead of doing anything real. That moment cannot come soon enough -- for the past decade, it's been nothing but the young generation scoffing at older people for being real instead of terminally online, as though that's the hip, cool, wild & crazy way to be a teenager or 20-something!

The natural order is for young people to live directly, and old people to be plugged into "their stories" on TV, after having acquired so much direct experience when they were growing up. But when Millennials get old -- in about five seconds -- they're going to be in the strange position of only being plugged into "their stories" (albeit online rather than via TV), but without having had all those direct experiences and memories from their formative years. An entire lifetime of existential void and abyss, caused entirely by their over-reactive helicopter parents.

However, since we've begun the rising-crime phase of the crime-and-cocooning cycle, I predict that the middle-aged Millennials and Zoomers are going to go total freak-out mode, in a desperate attempt to make up for their lost abyss of a youth. Exactly like the Silent Generation during the late '60s and '70s, whose youth was sheltered during the cocooning phase of the mid-'30s through the '50s. All of that weird stuff from the late '60s and '70s was by and for the Silents, not the Boomers (who were mere children at that time).

That's what happens when you shelter your kids -- prevent them from developing naturally, then they go totally off-the-wall in middle age. I wouldn't discount the chances of another acute divorce epidemic when Millennials and Zoomers hit middle age. Everyone knows they've basically never had sex as young people, and when they're 40, they're going to be bitter and try to make up for it -- plus the zeitgeist will be much more accommodating, since young people are going to get wilder in the coming decades, so middle-aged men will have willing young partners like they have not had since the '60, '70s, or '80s.

For the first time in awhile, the world's about to get a whole lot more lit, socially and not just economically or politically.