Earlier posts here and here have looked at the regular appearance of the dream pop genre during the vulnerable, refractory phase of the 15-year cultural excitement cycle, among both indie and mainstream artists.

"Delicate" by Taylor Swift comes pretty close to fitting into this pattern, but doesn't have enough of an instrumental drone, or vocal echoes / self harmony, to fully qualify. However, a new non-single song "The Archer" does (from her upcoming album). This is the final year of the current vulnerable phase (late 2010s), so it's just sneaking in before closing time at the emo bar.

Her new single, "Lover", is another good fit to the current mellow and vulnerable atmosphere. Between the two of them, I pick up vibes from a previous vulnerable phase -- the late '80s. Especially the singer-songwriters who were actual lesbians, or were popular among them: "Sweet Jane" by Cowboy Junkies (itself a phase-matching cover of a Velvet Underground song from the early '70s vulnerable phase), "Baby Can I Hold You" by Tracy Chapman, and even a little hint of "Rockin' Back Inside Your Heart" by Julee Cruise (or similar Angelo Badalamenti tune for David Lynch).

Taylor Swift is a closeted lesbian herself (her last girlfriend being Karlie Kloss), so it's natural for her to channel those vibes. It is unusual, though, for such a babyfaced lipstick lesbian to do so. She could use them to pivot toward a more mature audience during the upcoming restless, warm-up phase, which will echo the early '90s. That's when people are worn out of being worn out, and are intent on overcoming whatever vulnerable state they had just been in.

I could easily see her covering -- or at least channeling -- songs by lesbian / androgynous artists from the early '90s, like "Damn I Wish I Was Your Lover" by Sophie B. Hawkins or "Why" by Annie Lennox. These are not about letting yourself drown in vulnerability, but about rebuilding yourself or finding new confidence after being so beaten down during the vulnerable phase. It remains to be seen, though, if Millennials can pull off a mature persona.

These singer-songwriter tunes from Taylor Swift remind me of a photo shoot she did for Wonderland at the very end of the last manic phase, as it was about to shift into the current vulnerable phase (late 2014). These were included in an earlier post covering the revival of intimate portraits during the vulnerable phase. No matter how many times I see them, I still can't believe that's her. She's so smolderingly dark and hot, whereas she normally comes off as a libido-less lipstick lezzie. Maybe it's that these songs are about taking the risk of exposing herself, rather than hide behind her closeted persona. Whatever it is, they go very well together. 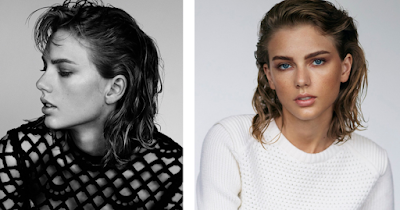