Vamps get vulnerable, as portraits come back into vogue

Surveying these changes over multiple full cycles will wait for another post. The basic impression is that the manic phase is more likely to produce portraits of women who are smiling, laughing, and assertive, while the following refractory phase shows women who are more insecure, nervous, wounded, etc.

For now, we'll study some of the defining traits of the new style, or revived style, that began around 2015. It's most striking when these traits are shown by figures whose usual persona is a vamp trading on her sex appeal, as appearing fragile, self-doubting, or pensive would contradict their normal presentation of being composed, self-assured, and carefree. Instead of staging an act to provoke an intended reaction from others, they are going more natural and studying the audience's response to their more low-key intimate persona, uncertain of how they'll be received.

NB: there are two NSFW nudes at the end.

First, a totally unrecognizable Taylor Swift at the end of 2014 (Wonderland): 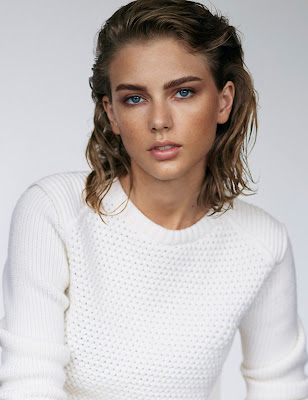 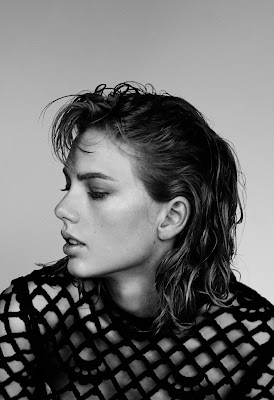 Her usual vampy look is raised upper eyelids and eyebrows, to indicate that she's noticing you, but also raised lower eyelids, in a kind of protective squint. Usually her lips are pouty to telegraph kissy-kissy, or closed in a subtle smirk. Her hair usually acts as a mask to cover her forehead, ears, and vertical part of her jawline, and is usually highly stylized.

In the portraits above, her eyebrows rest at a normal level, the upper and lower eyelids are both lowered, and the lips are parted, giving her a more mellow and open expression than her usual stiff, hamming-it-up expression. Her body language is engaging you in a back-and-forth conversation, instead of delivering a one-way rehearsed performance to the audience.

Her tresses being pulled away from the face is like taking off her hair-mask, and their wet-and-tousled state gives them an intimate just-out-of-the-shower look, rather than the meticulously sculpted look of a professional stage performer.

Adding to the natural impression are darker and furrier eyebrows, darker hair, and varied skin tone (just bronzer around the periphery), as opposed to her usual mask-like look of nano-sculpted eybrows, lightened hair, and uniform heavy make-up.

The shoulders leaning slightly off-kilter and forward, with the head tilted to the side, make her look uncertain and questioning about how you're going to respond to her, in contrast to her usual posture of shoulders drawn back and head balanced, certain and confident that her audience is receiving her performance well. 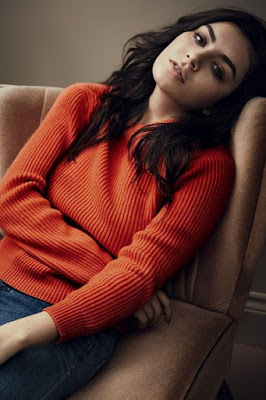 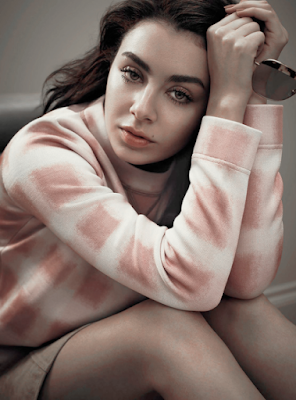 During the last manic phase, her expressions were highly animated, although by now she has sunken into a more strung-out, almost combative poker-faced look. Here we catch a glimpse of her being more natural and casual, open without being exhibitionistic, and still vulnerable without being defensive.

We see again the importance of the tilted head (perhaps even resting on something for support) to indicate uncertainty or insecurity, and lips that are parted enough to not look silent, but not agape to the point of looking like a vampy put-on.

Portraits shot from farther back can make use of the arms and hands in a way that close-ups cannot. One or both arms held in front of the torso is a defensive posture -- more so if the legs too are raised in front of the torso, suggesting the fetal position. And yet as long as the head is not turned away, and as long as the gaze is not averted or stereotyped, we don't get the impression of her being aloof or anti-social. The juxtaposition of body language cues that are both open and closed conveys more a sense of uncertainty and insecurity -- revealing herself, but also nervous about how you're going to respond.

That tension is enhanced by the subtle use of hands that are clasped, fingers curled inward, or seeming to be in the middle of fidgeting with a prop in order to channel and alleviate her anxiety.

Rounding out the songbirds is Camila Cabello in 2015 (Teen Vogue): 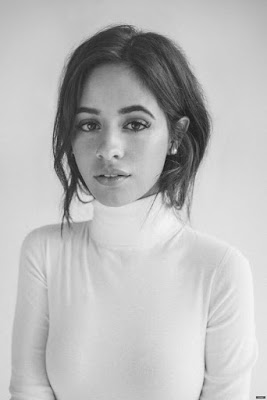 Her usual persona is sultry, with heavily drooping eyelids and yawning-open lips. That drowsy combination suggests someone whose consciousness and internal self-monitor has shut off, and is on an animal-like autopilot, sleepwalking through her activities. But here we see her eyes opened more than usual (though still semi-narrowed), with eyebrows slightly raised as well, giving us a half-inquisitive look. The lips are closed more than usual, though still parted enough to convey openness to a conversation.

Although her hands are not directly in view, simply including the upper part of her arms and shoulders shows that they are held close to the torso, and there's a hint that they are bent at the elbow, crossing over in front, perhaps clasped over her lap. At any rate, they're not held apart from her sides or up in the air, as she usually does to convey confidence and strength.

Here she looks more protective with her arms and hands, while still being open in her facial expression -- seeking validation but also nervous, as though she were awaiting an uncertain verdict. 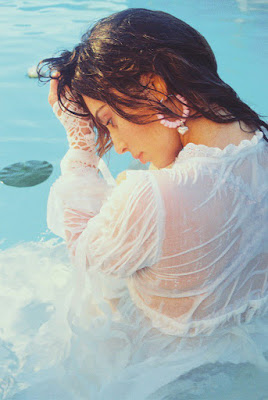 She used to make over-the-top selfie faces during the early 2010s, before settling into the wide-eyed and stone-faced expression she wears these days. But merely lacking expression does not signal vulnerability. In this portrait, she still has that same basic stone face, although her eyes are narrowed a bit instead of open wide as usual -- concentrating on something -- and downcast as well. She looks lost in thought and wistful.

The rest of her body language makes up for what is close to her usual face. Her neck is bent over, head tilted to the side, hand slowly fidgeting with her hair or trying to massage her scalp, all giving an impression of weariness and wanting to alleviate tension.

The use of reverse perspective works well here, since if we saw her from her front, it would look like she was turning her face away from us, as though to say don't bother me, I just want to brood by myself right now. But shot from behind, she's actually turning her head in order to reveal her face, which would otherwise be obscured by the back of her head. The resulting contrast between open and closed signals conveys insecurity and vulnerability. 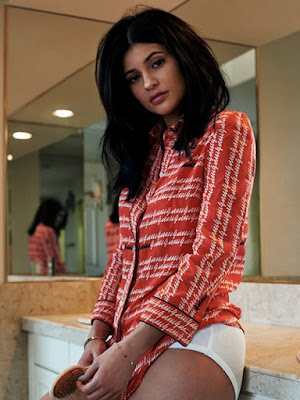 Like her sister, she is usually stone-faced these days, or vamping it up with overly narrowed eyes and pouty lips. Here, the tilted head gives an inquisitive look, enhanced by the peak of the eyebrow appearing to be even more raised when it's the top of a slope rather than one end of a horizontal line. Her arms are crossed over in front, as her hands fidget with her hairbrush. Her body is turned in 3/4 perspective, although her face is looking at us straight-on. And she's resting against the sink rather than standing upright.

These combined open and awkward signals create an impression of someone who is insecure about her looks or worth, who is opening up enough so that the viewer can evaluate, but who is also nervous enough about the uncertain verdict that she's preparing to close herself off just in case.

There's another portrait from the same shoot where her whole body is facing the viewer straight-on, while standing upright, head balanced, arms hanging off to either side, and where the hairbrush is just dangling in one hand rather than being fidgeted with. It gives off such a different vibe -- a more direct posture, mixed with narrowed eyes and pouty lips, to look like a vamp.

Finally, while most media portraits these days are of singers, actresses, and reality TV stars, there are still a handful of models out there, who just do the modeling thing. 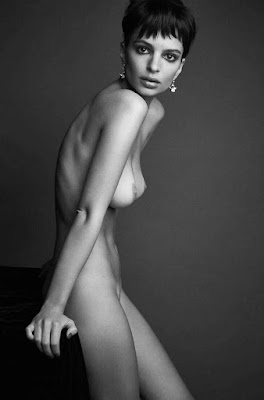 Unlike her performance in the "Blurred Lines" video during the manic phase, where she's merrily bouncing around the set, including at times moving right toward the camera, she looks more closed-off and anxious in this portrait. She is open to the extent of being stark naked and looking at the viewer, but her body is turned perpendicular to us -- almost as retreating as if she had her back to us. Her body looks fragile, with the back and shoulders hunched over, and resting against a set piece rather than standing up straight.

Her arms are not crossed over in front of her torso, but they have a similar effect by being placed squarely between her body and the viewer, given the profile perspective. Their harsh angle, locked elbow, and jutting toward the viewer all make them feel like defensive obstructions, lest anyone get too close. Her hands are nervously occupied holding onto the set piece.

She's not vamping up her facial expression as usual, although she does not have enough emotional range to strike the precise note she's looking for. But it's in the direction of "fear," a subdued deer-in-headlights look. A fearful facial expression combined with a stark naked body that is turned away from us looks more than just vulnerable. It's disquieting, and looks more like she fears getting molested by the viewer (as though the viewer-director just asked her to cross the line in filming what she was promised would be a "tasteful" scene), or that someone who is facing her (out of frame) has given her the creeps in a professional setting and she's turning her face toward us with an expression asking "WTF just happened?" and is imploring us for help.

As a recent post pointed out, feminism goes through phases in tandem with the cultural excitement cycle. During the manic phase of the early 2010s, it was "exhibitionism as feminism," if you got it flaunt it, don't body-shame me, etc. As of the late 2010s, during the vulnerable phase, it's shifted to a defensive and protective posture, as fear of male predators begins to spread. This contrast could not be any more stark than in Ratajkowski's performances between the "Blurred Lines" video in 2013 and the portrait above in 2017.

The photographer, Patrick Demarchelier, is one of the masters of portraits using it-girl models. This one reminds me of another, also during a vulnerable phase of the cultural excitement cycle, back in 1986 with Christy Turlington: 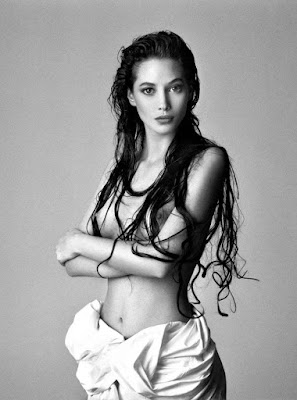 She doesn't have the same fearful eyes and agape lips that Ratajkowski does, but there's still a seemingly contradictory mix of signals -- a topless upper body though semi-covered by her locks, with the lower body appearing to have been hastily covered up with whatever was within reach, body turned somewhat away in 3/4 perspective, crossing her arms defiantly, and looking at us with an accusatory gaze, although leavened with levity by her raised eyebrow, as though she's saying tsk-tsk to a naughty man-child who she doesn't mind humoring, rather than being paralyzed by shock before a downright predator.

Manic phases may produce better examples of culture that is brief in duration, like song and dance, but for things that are supposed to be frozen or permanent, like naturalistic portraits, the post-manic phases do it better. Intense energy does not work well in a portrait, since it breaks our suspension of disbelief that we're watching the subject continuing to pose, in a kind of not-so-exciting movie. Fleeting manic energy reminds us that the portrait was just a snapshot of one moment, and that there's no point in paying attention longer than the initial instant.