With the general election quickly approaching, many in the Trump movement are looking for signs that predict victory. This is classic confirmation bias, which led in 2012 to mass delusion about Romney's certain landslide. In order to keep that from repeating itself, we now have to debunk all sorts of ideas about what predicts the general election outcome.

A common idea is to compare the turnout in the primaries for both parties within the same state. For example, will Trump win over the Rust Belt blue state of Michigan? Turnout for the Republican primary there was 1.3 million vs. 1.2 million turning out for the Democrat primary. By this simple comparison, it would seem that Trump is favored in the general -- especially since Trump won his side and Clinton lost her side in this state's primary.

But before we go any further, let's just ask whether this way of predicting the general election would have worked before. In 2008 and 2000, both parties held primary contests because neither party could continue to nominate the incumbent President. Green Papers has the results here and here. (A more thorough look should include earlier years with primaries in both parties.)

Below are maps showing which party had larger turnout for their primary races (gray means that at least one party didn't hold a popular vote, so no comparison could be made). 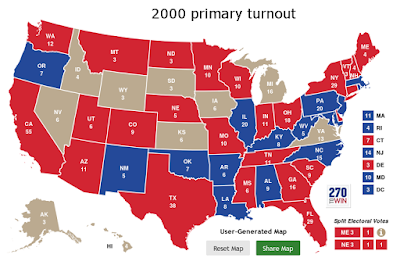 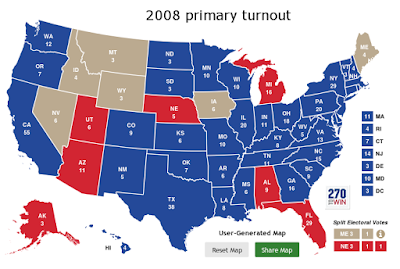 As you can see, the primary contests do not predict the general contests.

In 2000, several Southern states are blue, even though all were known to go red. Likewise most of the states in the Northeast, Upper Midwest, and West Coast are red, despite everyone knowing that they would go blue in the general.

In 2008, the failure is even more glaring. A couple of known red states were red during the primary, but most of them were not, including the South and the Plains, where no Democrat stood any chance. Worse, Michigan and Florida are shown red, and neither would go red in the general.

The primary process is a totally separate and independent process from the general election. When the choice of primary candidates motivates voters to get off the couch during the early stage of the electoral season, they become highly engaged and primary turnout is high. When the selection of primary candidates is not very motivating, they tend to stay home in the early stage -- regardless of whether they'll turn out later in the general, which is more of a routine for voters.

The general election behavior is independent of the primary contests for the simple reason that it's a totally different battle among a different set of candidates -- those from opposing parties, with different platforms and appeals, rather than more similar candidates within a party's primary. You may find your own party's primary candidates not worth turning out for, but when the contest shifts to your party vs. the other party, you may very well turn out and support your party in the general.

This must be kept in mind in 2016, when there has been little enthusiasm for Crooked Hillary Clinton among Democrats -- don't underestimate their ability to show up in the general simply to "vote Democrat" as usual in our highly partisan climate.

In 2000, the Republican race was more engaging, even though they would lose the popular vote and only eke out an Electoral College victory through shenanigans (halting the Florida recount, and lucking out with the Supreme Court upholding that move). And just because Californians found the Republican rather than the Democrat primary more engaging, that did not mean that California would go red in the general -- and everyone knew it would not, before the primaries were even held.

In 2008, the Democrat race was more engaging, and they would go on to win the popular and EC vote -- although not nearly by as wide of a margin as the primary map suggests. In the South, the Democrat primary was more engaging because black voters were highly motivated to get one of their own into the nomination for the first time ever, while white voters were highly motivated to make sure that did not happen. This resulted in high turnout for both Democrat candidates in the Southern primaries, and therefore high turnout overall in the South during the primary. But before these primaries were even held, everyone already knew that none of these Southern states was going to vote Democrat in the general.

Returning to 2016, all we can tell from the primary turnout on either side is which group of voters found their candidate selection more motivating. In Michigan, excitement was about the same on either side, largely driven by Trump and Bernie raising the issue of trade treaties that have sent large numbers of manufacturing jobs outside the country, hitting the local car industry severely. But it tells us nothing about how Michiganders will behave in the general election, and we should not follow D vs. R turnout in primaries as a guide toward the eventual outcome.