The only place where Trump came in second yesterday was Ohio, although his share of the vote was the same as in neighboring Michigan and Kentucky (36%). So it's not as though his message resonated any less than it did in the surrounding area.

But unlike those two states, where there was no favorite son for the non-Trump voters to coalesce around, there was a semi-popular Governor in Ohio who could draw enough of the non-Trump vote for himself to take the state. The term "favorite son" is an exaggeration, since he only got 47% of the vote -- similar to John McCain in Arizona in 2008, and he's not exactly their favorite either. Contrast with Dubya's 88% in the Texas primary of 2000.

Kasich's support also split heavily along geographic and cultural lines, with the Appalachian region of Ohio going solidly for Trump -- around 50% in each county. They resonate with the anti-PC tone, deporting immigrants and banning Muslims, manufacturing, steel, and coal coming back, and foreign policy being more pragmatic and limited. And feeling like their leaders have betrayed them.

Here are maps showing the primary results and Appalachia. Notice how closely Trump support and Appalachian status go together. In states where Trump dominates everywhere, it's hard to see. But where there's variation within a state, it jumps out -- you see it also in Kentucky, where the eastern region is Trump country, while Cruz took many major areas in the west. The only slight exception is the Asheville NC metro area, which went for Cruz despite being in Appalachia -- someone who knows more can explain that. 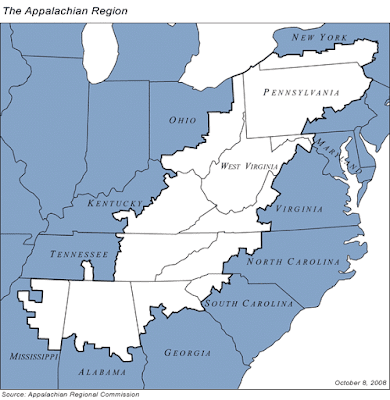 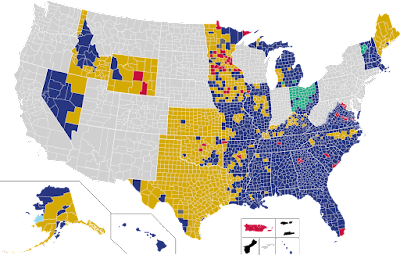 That bodes well for one of the big upcoming elections that Kasich is focusing on -- Pennsylvania, much of which is Appalachian. There were reports about massive defection of Democrats to Trump in both eastern Ohio and eastern Kentucky, and we can expect the same for western PA. That's actually where Kasich comes from -- that heavy accent you hear is from the Pittsburgh area -- but it's clear from the rest of Appalachia that they want nothing to do with his neocon, Wall Street, limpwristed conservadad bullcrap. I would kill to see a bunch of Yinzers heckling Kasich in his own regional dialect, deflating the myth that he's just a humble small-town kinda guy, but really just another phony jagoff.

It also bodes well for Upstate New York, only some of which is Appalachian, but much of which is on the same basic wavelength culturally and economically. As for the more East Coast parts of PA, NJ, and NY, Trump and his attack dog Christie both enjoy yuge regional appeal. I can't see the Jersey Shore kind of Pennsylvanians choosing the nutjob cult guru Cruz or the milquetoast Ned Flanders clone.

On a final sidenote, with the Missouri results in, the Ozarks are revealing themselves to be part of the trans-Mississippian Frontier rather than an extension of Appalachia, as they side with Cruz over Trump. They may like to emphasize their similar Scotch-Irish heritage, their similar hilly/mountainous environment, and their historical beginnings in Appalachia, but if they're so easily drawn in by the snake oil cult, they're too Western to be hillbillies.

When Mississippi's results came in, we saw that Tupelo and a suburb of Memphis were Cruz counties. Now it's not just Elvis who hails from cuck country, but Johnny Cash too. Maybe all we need to break the spell of the Cruz cult is to jam their airwaves and play some banjo-pickin' music instead.