Rising inequality from passing the tax burden onto future generations

An overlooked cause of the rising inequality levels over the past 35 to 40 years is the unwillingness of earners to pay enough in taxes to cover the current disbursement of government goodies, which leads to them being paid for with borrowed money. They kick the can on down the road for future earners to deal with — only by then, the can will have grown into an oil drum, full of napalm. Heads up, dudes!

This is nothing more than the earlier generation extracting wealth from the later generation. The early one escapes having to pay much in taxes, while the later one must pay down the debt accrued by the early one in addition to funding current goodies. Did the later one have a say when the early one made the decision to pass the buck? Of course not — they weren't even born yet. It's the most shameless kind of "externality."

If the parasitic generation plays its cards right, they can become the beneficiaries of so many goodies once they're no longer current earners. So when the Boomers either retire or stop working a normal load, they'll start collecting Social Security and Medicare. But it won't be the Boomers themselves who are paying for that mountain of prescription drugs. It'll be yet another extraction of wealth from the Gen X and Millennial earners — this time transferring funds in real time, on top of the delayed effect of passing the buck.

For this article on sponging Boomers, The Economist included the chart below as a succinct reminder of how dramatically the generations differ in how much they'll be getting out of the tax-and-spend system, compared to what they'll have put in. It cannot be reduced to a chart based on age, since you can bet that, by retirement time, Gen X won't be enjoying the level of goodies that the Boomers have since they were young. Millennials can expect even less. 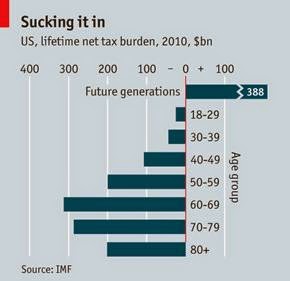 Will this kicking-the-can behavior ever end? Will anybody ever be willing to jump on the grenade to save the future generations of our society?

I've found some data from the General Social Survey which suggest that Gen X and the Millennials are qualitatively different from the Boomers, Silents, and Greatest Gen members, who are for their part remarkably like each other in kicking the can. For the first time in perhaps 100 years, we have a group that hasn't made howling about taxes their main political concern (even more amazing when you consider what today's taxes go to, compared to the '50s or '60s).

As the Scrooge McDucks die off, the majority of the country will be made up of folks who see taxes as like the collection plate that they pass around in church, or paying your dues with the labor union or other civic organization. Nobody likes to part with their hard-earned cash, but maybe someone else needs some of it more than you do. And maybe there are goods and services too expensive for one person or household to buy, which require pooling resources across a much wider base.

I realize this sounds like the first day of civics class, but in our status-striving climate, all we normally think about is "what's in it for me?" rather than how our individual choices affect the rest of society.

For now, the key thing to bear in mind is how generationally structured the rising-inequality trend has been — and hence, how it will be when the shit hits the fan before inequality can begin to fall. I wouldn't be surprised if the upcoming civil war (or whatever it turns out to be) has an explicit faultline drawn between generations, given how aware both sides are about the role of, say, Medicare in sending the debt burden off into another galaxy.