Can audiences tell how crummy digital movies look? Do they care?

In an article about the replacement of film projectors by digital projectors in movie theaters (about 93% in 2014), they quote David Fincher's cinematographer Jeff Cronenweth about how convincing digital looks these days:

The proudest comment I get is, 'What did you shoot "Dragon Tattoo" on?' To me, if you can't tell, we're getting much closer. There are certain scenes that it's indistinguishable."


Here is the still that the article included to showcase how film-like today's digitally captured images can look, from The Girl with the Dragon Tattoo: 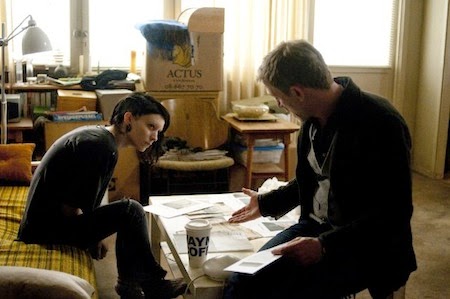 You'll notice right away that this looks way harsh on the eyes, given how mundane the setting is. Most folks will not be able to put their finger on it, but their senses will pick it up nonetheless. Look at how blindingly white the light is coming through the windows, and reflecting off the table top and the papers or documents there as well. There are actually fabric curtains hanging in front of the center-right window, but they appear whitewashed.

This is a textbook example of digital having less dynamic range in brightness levels than good ol' film. Digital must make a trade-off that film does not -- pick up details in darker areas and wash them out in brighter areas, or vice versa, since the range is not wide enough to pick up both.*

If they made the other decision, the girl's black clothing would look uniformly black, like somebody traced around her outline and hit "fill" inside with MS Paint. It hardly looks any better, though, when they hit "fill" on the windows, table top, and documents with bright white.

And please don't try to rationalize this harsh crappy lighting by arguing that it's artistically justified. It's just an ordinary mundane setting, nothing supernatural or from-another-dimension is about to break through the window and into the apartment. It looks like two people who aren't having as much fun on vacation as they'd planned, and are looking for something to kill the time in the middle of the afternoon.

Perhaps it's a quirky, idiosyncratic, "signature" style? Nope. Check out this shot from an even more famous movie that the director and DP teamed up on, Fight Club:

Daytime setting, couple of people sitting around in a room lit partly from inside and partly from outside. Yet the window is not blown out into a featureless plane of ultra-white. There's enough detail for us to see each blind, and even those thin vertical strings that hold them in place. Table surfaces do not have their texture whitewashed.

But that movie was filmed in 1999, before the studios learned that audiences had lowered their standards so much that you could show them crud and still get the butts in the seats. No way you could've projected the highest-quality Betamax tape onto the big screen and expected a 1980s audience to habituate, worrying less about the quality of the image they're going to be looking at for two hours than about whether their popcorn has too much salt or whether their stadium seat is soft enough.

By now, the look and feel of film is a distant memory for most folks. That's the reason why they'd have any trouble telling if The Girl with the Dragon Tattoo was shot on film or digital.