What's so shocking about how sheltered kids are these days is not only the extent of their cocooning but just how rapidly the world changed. Most of our collectively recalled history comes from Baby Boomers, and therefore most of our images of how kids behaved before Ritalin and child safety seats takes place during the 1960s. The Sandlot, The Wonder Years, and Forrest Gump -- that's the standard image of pre-domesticated childhood in the popular imagination.

Naively connecting the two dots of the 1960s to the 1990s and after suggests that it all went slowly downhill in the 1970s. And yet in this case as in so many others, the '60s were just the beginning for a phenomenon that would peak in the '80s or early '90s. Generation X and the mini-cohort just after then, Gen Y, have just as many memories, and just as vivid, as the Boomers do, so why is there such a huge gap in the popular imagination of what daily life was like 20 to 30 years ago?

I think the Boomers were simply fortunate to enter their nostalgic years during a romantic era -- the 1980s -- when no one would look at you funny for looking back on the good old days. And the not so good old days too, witness the steady stream of pop culture about the Vietnam War throughout the '80s and early '90s. Now the Boomers were going to reflect on what it all meant from an adult perspective, not through a child's or adolescent's eyes.

Even the younger generation hopped on board, despite having no personal memories of those times -- Stand by Me is way more popular with Gen X than with the Boomers whose early years it depicts. I imagine the same was true for Happy Days, Back to the Future, and the whole rockabilly revival.

Nowadays, though, we have sunken too deeply into sarcasm, irony, antipathy, and rationalism for an honest, upbeat look back at the '80s to catch on broadly. It would have to be performed in blackface, like the musical Rock of Ages. But so what if it wouldn't be popular? You really wouldn't want to be in-demand during such snarky and sappy times.

So in my own little way, I hope this romp through pictures of the lives of children during the Reagan and Bush years will help fill a gap in the popular imagination. It'll focus mostly on how independent and rambunctious we were encouraged to act, and how eager we were to oblige. I'll probably have more posts to follow that cover other aspects of life back then.

I've related so many personal stories over the past several years that I thought it'd be better to focus on my younger twin brothers. That way it won't be biased by wanting to remember my own childhood as greater than it was. It will also show how sharp the divide is between Gen Y and Millennials, the first to be raised by helicopter parents. Although I was born in 1980, my brothers were born in '82, and even they lived normal, exciting lives. These scenes are mostly from the late '80s and early '90s and show how late the trend lasted. They show both suburban and rural settings to emphasize how much "ain't that America?" there was even in the 'burbs.

First, here's one from early 1983, when I'm not even 2 1/2 years old, but still super-stoked to get to help Pap carry some firewood in from the garage at my grandparents' house. I think I'd already started to help chop it outside first, at least the smaller pieces. 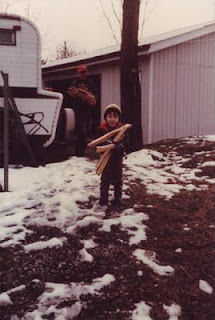 This trip to the Smithsonian is I'd guess from the summer of '87. My brother and I are on the horn/plate area, but just look at how much the kids are climbing all over the thing. Also notice how few parents are in sight, and how those that are nearby are either paying them no mind (assured that the kids aren't stupid and clumsy enough to kill themselves), or are looking on from a distance. 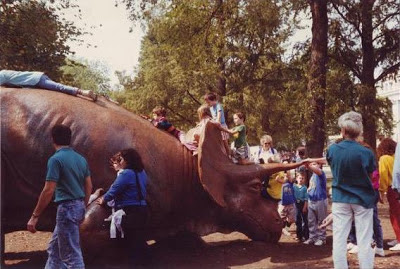 This next one is a bit hard to make out, but it looks like the spring from anytime between '87 and '89. The distance alone makes it unusual from today's perspective of parents snapping pictures from up close. My mother kept herself hidden in the kitchen like in some wildlife documentary, so as to not disturb their natural behavior.

They've got a plastic kids' table set up with what looks like milk and probably cookies for sale to passersby. Letting milk sit out in the afternoon sun? Rookie mistake, dudes. But they learned for the next time and started selling kool-aid. I only assume they thought there was an untapped niche for those growing anxious of the crowded market in lemonade. You don't ever see kids selling stuff on their own anymore, but it was nothing newsworthy in the entrepreneurial Eighties. They're discussing something, who knows what, but it's all taking place unmediated by grown-ups. If you don't learn how to represent yourself in a social interaction, you'll never feel comfortable around other people. 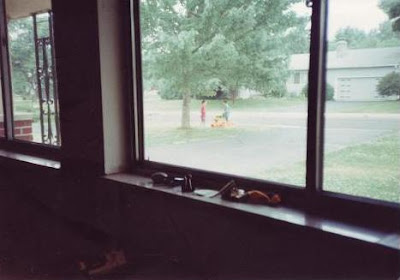 And now we turn to the real shockers. One of my brothers was born in camouflage, and here he is setting off on his first real hunting trip with two uncles, sometime in the late '80s. Yep, that's a real .22 rifle in the hands of a second or third-grader. I don't think he hit anything himself, but he did bring back a grouse head to scare the girls at school with. Nowadays Pap would probably be fined or locked up for teaching the three of us to shoot at such a young age. 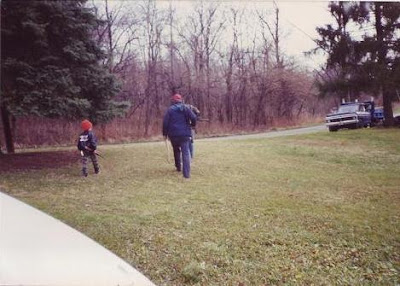 This one's from late 1988. My grandmother's caption reads, Let's go to the woods "Pap" -- we would always bug him to take us out there so we could run around, chop tree branches off, push big dead trees over, sever a thick vine to go swinging on out across the ravine, and whatever else would put hair on our chest. It wasn't the anarchy of spoiled brats given total license with dangerous toys -- we actually had to learn how to use those things properly or suffer the consequences. I'm carrying an ax, the center brother a pick-ax, and the left brother a hatchet. All that red... and not givin' a fuck. 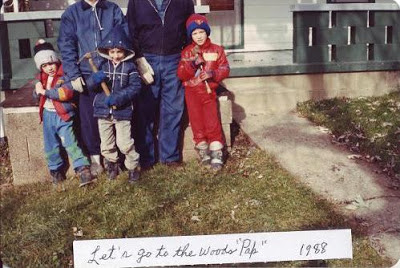 The next two scenes are from their 8th birthday party in 1990. One of their friends aims a mini-sawed-off shotgun at the other who points back a life-size rifle. And not a grown-up in sight to steer them away! Also notice the lack of a big orange knob at the muzzle, or any other garish colors and weird shapes that would signal right away that it's just a replica for babies. Kids' guns looked like real guns at one time. 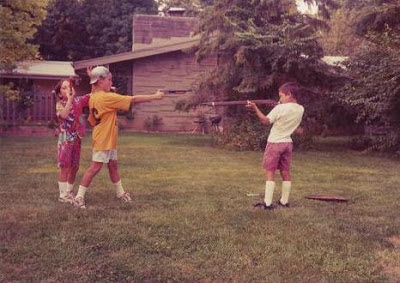 The final scene from Scarface? Nope, just another party where we're pretending to blow each other away, point blank. Just think: that's one of my parents taking a picture of their own precious little dear with a gun pressed against the back of his skull! We indulged in so much more black humor back then -- everything's so damn serious and weepy these days. Everybody is a snarkmeister, yet nobody wants to "go there" or "be that guy". It's like the dork squad took over the whole country. 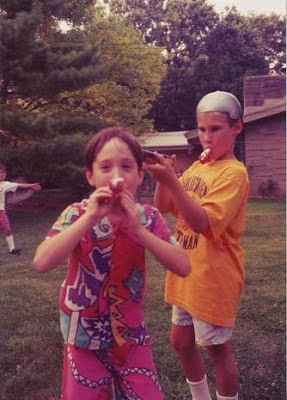 Easter 1991, when they're still 8. So many things going right here it'd make a modern parent's head explode: he must be 15 feet up in the air, he's distracted and only holding on with one hand, his brother isn't doing much to spot him on the ground, and as usual there are no grown-ups in sight. 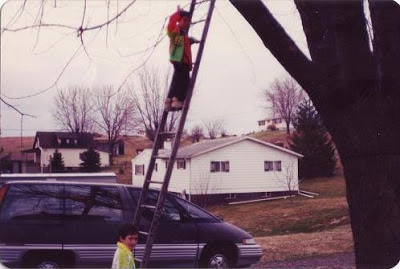 I had a summertime job when I was 10, and my brother took a stab at earning a living at that age too. He's on the left, I'm there on the right to lend a hand. This is almost the summer of '93, and he's set up a table selling baseball cards at one of those small-scale conventions that they used to have before people took it way too seriously and would only patronize Lord of the Rings-scale conventions -- i.e., for dorks. This was in a church basement, I think. You can't see it, but on the floor behind the table he brought his functioning cash register -- back then lots of kids had been bitten by the Alex P. Keaton bug. 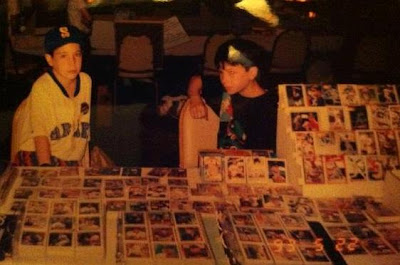 Finally, here's one from somewhere between '92 and '94. The society was starting to move away from the "you can do it!" spirit and back toward the cult of managerialism last seen during the mid-century. But the decline had only begun; you could still find unsupervised activities that were technically illegal yet necessary for proper development. Pap let us drive his tractor once we'd gotten to be around 10 or 11 or so, and as you can see, it didn't matter if a pedestrian was chasing you or not. Shoot, they need to learn how to make a clean getaway while they're still young, don't they? 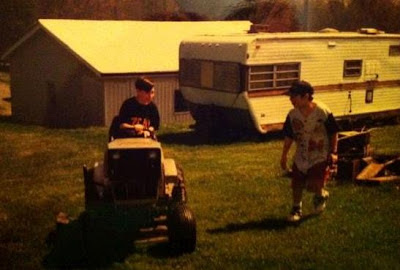 Ax-swinging little boy, can you be as far away as you appear? We flung ourselves into some weird parallel dimension and must squint to make out your face anymore.