I think I've already got two other graphs like this on the blog somewhere, but the 2010 data are in. 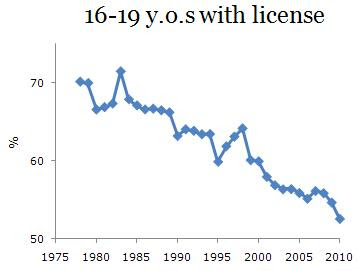 The first drop-off takes place in 1990, actually a bit before the peak in the crime rate. This is another example of cocooning behavior slightly preceding a drop in violence rates. During the mid-2000s, it looked like it might have been slowing down, but it's only fallen at a faster rate within the past several years. The overall decline gets sharper the younger the age group you look at -- least steep for 19 year-olds, up to the most steep for 16 year-olds.

A driver's license used to be sought after as a rite of passage and a ticket to freedom, especially in high school when you don't have a college campus that's at least somewhat accessible by foot or school shuttles. By now, among high schoolers old enough to get one (16-17 year-olds), only 38% have followed through. Talk about delaying growing up.

Don't teenagers find it embarrassing anymore to have to get driven around by their parents, or burden their one friend who drives with ride requests? Truly a lazy and shameless generation.

It would be neat to find data on rates of attempting the test for the first time, passing rates, and re-try rates for those who failed. Like, are fewer of them trying to get a license at all? Even among those who try, if they fail, are they more likely to put off the second attempt until much later?

Due to a careless mistake, I flunked my first test -- and right on my 16th birthday! -- but I showed up the next weekend, or maybe the one after that, and passed it with no problems. Today I don't think a 16 year-old would have that minimal amount of perseverance. They'd need a year of self-esteem therapy before they'd feel comfortable giving it another go.