Getting a little banged up makes you stronger (historical data)

After listening to this EconTalk podcast with Nassim Taleb on how sometimes a little stress can make a system stronger, I remembered some data I looked at but never wrote up. Might as well now.

The property they talk about is hormesis, where some stress to a system, even a lot of it, can make the system stronger, although there is usually a limit that can be reached. For example, stressing your muscles by lifting heavy things makes them stronger over the long run because your body says "I just had to lift 100 pounds, and next time it may be worse," and beefs up in anticipation of that potentially greater stressor.

I'm amazed at how uncoordinated and weak young people are today, but that's what you get when you never get thrown off your balance or have to lift anything heavy. It could be something as simple as running down a hill or crossing a stream over a thin log to improve your balance, or lifting and carrying stones to shove or throw into the creek to boost strength. Way more fun than atrophying in front of a video game, and you don't have to plunk down $60 for every spot in the woods, baseball diamond, or wherever, that you play around in.

Clearly the rate of fracturing a bone will be positively related to how often you put yourself in a dangerous situation. So along with the fracture rates from the study, I've plotted the violent crime rate (just for Minnesota, and using the average of the three-year period). That is a good enough proxy for how likely young people are to get into situations where they could fracture a bone -- not necessarily because they fracture their bone in a fight, but because young people are more rambunctious and rough-and-tumbling in a world of higher violent crime. 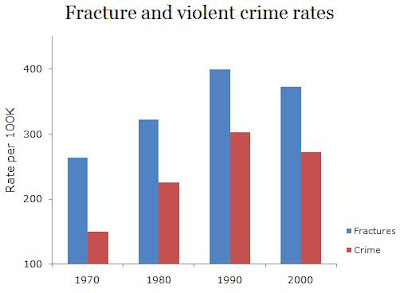 As expected, when people are more physical and risk-taking (as measured by the violent crime rate), there are more bone fractures. When crime rates fell during the '90s, so did the rate of fractures.

But that doesn't tell us how strong people's bones were in different times, since they were put to very different levels of stress. A young person who boxes professionally will get more fractures than another who has been strapped in bed all their life. To see how strong people were, we need to standardize the fracture rate by some measure of physical stress -- again I'll just use the violent crime rate. The ratio of fracture rates to violent crime rates says something like, "For a certain number of violent crimes in the population, how many bone fractures are there?" Higher values mean weaker bones. 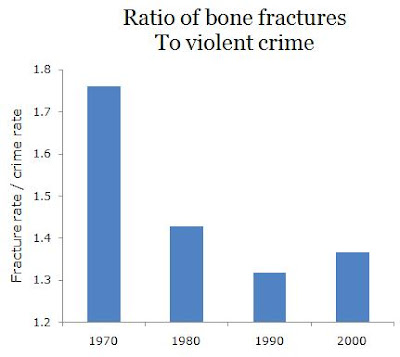 Now we see something very different. As crime rates rose from 1970 through 1990, young people's bones got stronger -- for a given level of physical danger and stress, they fractured fewer and fewer bones. Using this ratio as a measure of strength, they got 25% stronger over those 20 years. However, as crime rates fell during the '90s, their bones got weaker -- there's an increase in the ratio by 2000. *

The 1970 ratio is pretty high, even though that was a rising-crime period. I think because the study looked at anyone under 35, a decent amount of the 1970 group was later Silent Generation people who spent most of their childhood locked indoors reading horror comic books and listening to radio programs, rather than roaming around the woods and playing sports like the Baby Boomers did.

Likewise, the 2000 ratio is an uptick, but not a leap upward. Again in that group there are generational differences in childhood wildness -- it's including a lot of Generation X and Gen Y people, along with the more sheltered and weaker Millennials. The strongest group is the one from 1990, when it was made up mostly of Gen X and Gen Y, whose bones developed in childhood during the rough-and-tumbling '70s and '80s. (Green punch buggy, no hits back!)

If peak bone density is reached by age 25, and if growing up in a rising-crime environment makes bones stronger (as shown above), then the strongest cohorts would be those who were born in and reached 25 entirely during rising-crime times. That includes people born from 1959 (the first year of the crime wave), through 1967 (who would reach 25 when the crime rate peaked in '92). Obviously we'll have to wait until each cohort reaches elderly age, and look at rates of osteoporosis, fractures, etc., and controlling for other health-related factors that show generational differences (like smoking).

Finally, this shows the importance of looking at the long-term effects of stressing your bones while growing up. Sure, the Millennials may fracture bones at a lower rate when they're young, but that's only because they're insulated from physical demands in the first place. You can run but you can't hide from the real world of accidents, though -- eventually you'll get caught off-balance during your ordinary, low-stress routine. When that happens, your weak bones will shatter because of a simple fall. That may not happen right away, but you can't cheat fate into old age. And other basic human activities will be out of the question, like moving stuff, dancing, teaching your kids sports, just to name a few.

The better way is to be more physically engaged while you're young, at the risk of greater fractures in this "training period," in order to build stronger bones to last from early adulthood into your elderly years. Again, peak bone density is reached no later than 25, plateaus until about 30, and tends to decline after that. A sheltered childhood and adolescence is not something you can correct later on down the line.

When adults overly protect young people, they wind up impairing their growth. Social isolation makes them more egocentric, autistic, and avoidant as adults, but here we see an even more concrete case where it makes them physically weaker. It's not just helicopter parents shielding their own kids, but any group of grown-ups charged with guarding young people -- nutritionists, education policy makers, whoever.

There's nothing "traditional" or "family-friendly" or "health-conscious" about any of this, despite the rationalizations that the shielders offer. In the good old days kids were always horsing around, getting dirty, and scratching themselves up. Helicopter parents can only fool themselves into believing their ways are good for the child by exaggerating what kids would actually experience to life-threatening levels -- rolling around in filth all day, bareknuckles boxing at the dinner table, and dismemberment from falling down the branches of a tree.

Time for the whole country to just take a fuckin' chill pill and let young people naturally bang themselves up -- it's for their own good.

* Hopefully the authors will continue this study for the 2009-2011 period, although that wouldn't be published for at least a year. I would predict that the fracture rate will decline further from the 2000 period, just as the violent crime rate has, but that the ratio between the two will go up.