On Norah Jones as an example of the rise in fearful-avoidant women, Ziel left a comment about how painfully uncomfortable she is in this duet for "Love Hurts" with the admittedly oddball Keith Richards. She should've just gotten over it for a few minutes in order to give a good performance for the crowd, but she totally freezes.

Compare that to the 1983 duet, "We've Got Tonight", by Kenny Rogers and Sheena Easton. Rogers was 44 and gray-haired, while Easton was 23 and a vulnerable little thing. She doesn't even look like she's just putting up with him for the sake of the crowd -- she's getting really into the song, letting him hold her hand and hug her. Today her counterpart's reaction would be omg creepy guy!!! where are you when i need you harry potter?!?!?! But back then people didn't find normal affection weird.

They can sound cheesy, but duets are not made with pop music perfection in mind. They're more of a demonstration to the audience that normal barriers can be let down -- for a little while, anyway -- so that two growing-distant groups can overcome their differences and be a little more team-minded in the future. If the duet partners can do it, why can't you?

It's rarely two groups who are bitter enemies for good reason, but more like those who are drifting out of touch and need to count on each other more. Men and women, younger and older, one sub-culture and another, or blacks and whites (NB: never Mexicans or East Asians).

Banding together, putting aside petty differences, the carnivalesque temporary weakening of barriers -- all themes that keep showing up in relation to the trend in the violence rate, so let's see if it's here too.

I looked at the songs of the Billboard Year-End Hot 100 (1959 was the earliest year with all songs), and found which ones had more than one artist listed -- this excludes songs performed by a group that makes duets normally, like Simon & Garfunkel. I'm looking just at those that represent two normally separate musicians coming together. (I also left out two songs from Disney movies, sticking just to pop music for teenagers and older.)

Then I checked if the Wikipedia page described the song as a duet (or if unsure, the Pandora page). This excludes songs where two stars come together just for hype value, but where there is no sense of the two interweaving their voices, interacting with each other, and if anything playing down their own egos. We all know what "duet" means.

I've weighted each song based on how high in the rankings it was [1], and added up these weighted values for each year. Here is how this index of popularity has changed over time: 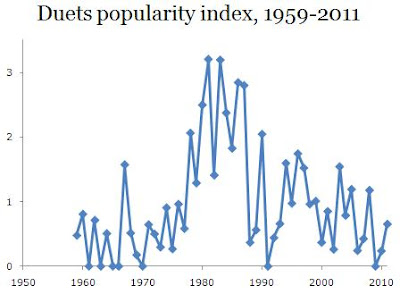 It starts low but shows a jump in 1967, and continues to rise through the '70s, plateauing at a high throughout the '80s. Even 1990 is still pretty high. But by 1991, there are zero duets for the first time in over two decades, the downward trend after that is clear. There are still fluctuations up and down, but both the peaks and troughs get steadily lower in the post-'91 period.

So the link to the crime rate checks out. Still, it looks like there are only fits and starts during the '60s and early '70s; most of the action is in the mid-'70s through 1990. It seems like people get more into duet mode during the apocalyptic second half of a rising-crime period, while in the first half they're still hoping that the experts can work things out, so that banding together at the grassroots level won't be necessary.

Aside from serving as a model to the audience that they shouldn't keep their guard up and be so isolated all the time, some of these duets sound great on their own:

"Easy Lover" by Philip Bailey (of Earth, Wind & Fire) and Phil Collins (of Genesis). Collins has a few moments in the video where he overdoes the "goofy white guy" act, but overall there's no self-consciousness about a black guy and a white guy making a kickass rock song about heartbreaking women.

"What Have I Done to Deserve This?" by Pet Shop Boys and Dusty Springfield. In this different-age duet, it's the woman who's older, by 15 years. But this was back in the pre-cougar days when women still aged gracefully. Both made their careers during rising-crime times, so it was easy to fit together.