The trend in people's actual level of social interaction, over the past 20 years, has been steadily downward. I've documented too many case studies to provide links for them all, but let's look at a new case anyway, and one that gets directly to how socially integrated people are.

The General Social Survey asks a question about how many people the respondent has discussed important matters with over the last six months. * This means it's not a superficial relationship, like water cooler chat with your office-mates or conversations with family that are still impersonal. Here is the percent of people who had 0, 1, 2, 3, 4, 5, or 6 others who they were close enough to discuss important matters with, in 1985, 1987, and 2004: 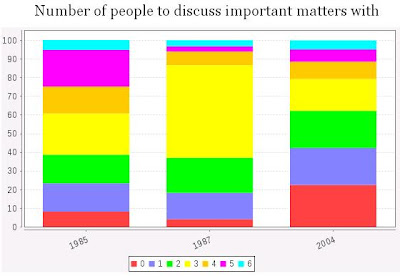 These contrasts between years show up in both sexes, all races, age groups, social classes, and regions of the country. It's not a result of changing racial demographics, which would have stricken the regions with more blacks and Hispanics and left the rest of the country alone. It's not due to there being more elderly people in recent years than when the country was over-run with young people, since it shows up even among 18-29 year-olds. There has instead been a society-wide shift toward much lower levels of actual social interaction.

Isn't it strange, then, that we don't see popular movies that treat the theme of loneliness, such as Taxi Driver or L.A. Story? And what happened to all those hit songs about yearning for more and deeper connections, from Roy Orbison's "Only the Lonely" through Al Green's "Tired of Being Alone", Billy Idol's "Dancing With Myself" and Whitney Houston's "I Wanna Dance with Somebody (Who Loves Me)"?

In fact, when people's actual level of interaction and support was highest in the mid-late '80s, it seemed like every other song was about lonely hearts. Sometimes it was directed toward the supernatural -- "Where's that higher love I keep thinking of?" More likely, though, it was about romantic connection -- "You can't start a fire without a spark / This gun's for hire, even if we're just dancing in the dark".

Given how powerfully these songs resonated with people, and also considering how high their actual level of connectedness was, their desired level must have been to encompass the entire nation. And indeed we were much more patriotic back then; it's funny to think that it took until the 1984 Olympics for us to invent the chant "U-S-A! U-S-A!" which has since fallen out of use and not been replaced.

This underscores the importance of looking at both components of loneliness, the desired and the actual level of interaction, since someone who didn't know better about how incredibly social people were in the '80s might wrongly assume from all those songs about loneliness that they were socially deprived.

As the violence rate fell after 1992, causing people to feel less of a need to connect with others for mutual support, their actual level of interaction plummeted as shown in the chart. So you might think people since then would have identified even more strongly with songs or movies about loneliness than during the gregarious rising-crime period before. Instead people are content with their existing level of interaction, often bordering on smug and glib.

And it has never been more popular to drip derision and scorn on the call to connect with more people, and at a deeper level. You can just hear Jon Stewart's simpering sarcastic voice: "Oh look at meee, I'm.. going to... reach out to... other... people... [grin]" If anything people subjectively feel the opposite of lonely -- too connected, frazzled, and over-loaded. How can that be, when they barely interact with anyone beyond a superficial level?

It is because their desired level of interaction has fallen off a cliff. Having even one confidant is already grating on their nerves, two is pushing it, and three is asking too much. We see this desire for minimal interaction in their other cocooning behavior as well, like avoiding public spaces, eating dinner in separate rooms or at separate times, and not touching each other with their hands when they pose for pictures or go dancing.

Obviously we do not have survey data on people's actual level of social interaction from the mid-century or other periods of falling crime, but the qualitative picture looks like they were less broadly socially engaged. And like the past 20 years, in other falling-crime periods people looked down their nose at the desire to belong to a broader community. In the eras of Renaissance humanism and the Age of Reason, the cool thing was to espouse cosmopolitanism -- i.e., to bond with no other soul at all.

As the Anglo empires neared their peak, cosmopolitanism was no longer the right way to wall yourself off from your countrymen. In the Victorian era and the mid-20th century, the focus moved more toward locking yourself up in the domestic sphere, not just women who had no life outside the house, but also men who restricted the domain of manliness to the nuclear household -- being the patriarch or good dad, not a pillar of the broader community or a leader / conqueror of some kind.

Now that the Anglo empires have declined from their peak influence, the "leave me alone" strategy is moving back toward cosmopolitanism again, though still mostly about the cult of domesticity, again for males and females alike.

In contrast, it looks like most periods of rising crime had people who were more tightly integrated into a large community, while still burning to belong to an even richer network, whether mundane or supernatural. Shakespeare's sonnets and John Donne's poetry show that from the Elizabethan-Jacobean wave of violence, and the explosion of mystical nationalism across Europe from the Romantic-Gothic wave of violence.

The mechanism seems pretty clear: rising violence causes people to value mutual aid more, so they desire more and deeper social connections. The rise in their actual level follows from that greater desired level, but that's not enough because the violence rate is still going up. During a wave of violence, every year blows a colder wind than the last year, so you always need more people than last year to huddle around with to keep warm.

I don't think people back then always felt lonely, though. It was probably a transient phase for just part of the year. First, raise your desired level of interaction, then feel lonelier as a result, and finally go out and develop those deeper connections you want, alleviating your loneliness. My guess is that people raised their desired level in the late spring or early summer, so that they'd be out and about during summer, when the weather is more conducive for making new friends. Plus if the connection is romantic, you want to raise your goals in time for the start of mating season. I couldn't find out during what month "Dancing with Myself" caught on, but all the other songs I mentioned above were released as singles between May and July.

* The question is called NUMGIVEN.