This is an update to a similar post that went up through 2009, now including the past two years.

Among the 10 highest-grossing movies released in a given year, here is the number of them that show at least partial nudity, according to the parental advisory section of their IMDb entries: 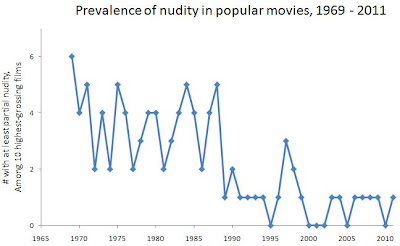 Even fans of those movies may call the nudity level "superfluous," i.e. they didn't need to show so much for the movie to work. But that is one of those "all else equal" situations that does not happen in reality. There aren't two independent dials, one for nudity and another for all the other good stuff. There's a general dial for seizing the audience's attention rather than putting them to sleep. When you dial down nudity, you must do it by dialing down that general knob, so the other good stuff disappears along with it.

Showing some flesh is just one piece that contributes to the audience's physiological state of arousal, helping to ease them out of their self-consciousness so they can get fully absorbed in the movie. It turns on your sympathetic nervous system, the one for "fight, flight, fright, and fucking." So they tended to use it when the movie tapped into those other feelings, such as action and horror movies, as well as anarchic and screwball comedies, but not so much for romantic comedies.

Moving on to ratings: 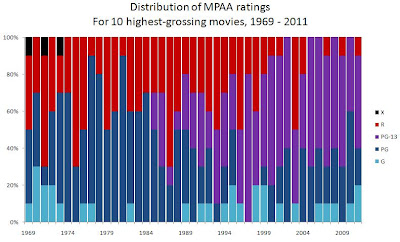 Again the past two years are just more of the same: most are PG-13, then PG, 1 or 2 are G, and there may or may not be an R. For a long time lots of commentators said that Hollywood was making too many R-rated movies, leaving money on the table that people would've paid to see movies with less sex, violence, and profanity. Along with the rest of the culture, that all turned around during the '90s and through today. So there probably was not a lot of unmet demand in the good ol' days, but rather that the society's tastes underwent a drastic change, opening up a vast new market for boring, inoffensive kiddie movies.

As with "superfluous" nudity, be careful what you wish for. People warned about how common R-rated movies used to be, but what has been the real-world alternative? -- grown-ups flocking to movies that even a 7 year-old would have found immature back in the day, and often eagerly! How pathetic is it that college students get dressed up for a new Harry Potter movie? At any age past 11 or 12, that would have invited merciless shaming, although most people would never have had the inclination in the first place. Now we have people 10 years past puberty who get excited over toddler stuff. It's better to grow up a little too fast than a little to slow.