Why East Asians are so unconscientious and disagreeable: Is it agriculture?

Big thanks to commenter Miguel Madeira who linked to an article on global differences in personality by Schmitt et al. (2007). These kinds of papers pop up now and again, and it doesn't conflict with the gist that I got from earlier ones. This paper has much better graphs and tables, though.

There's a lot that could be covered, but I'll stick to clearing up a major misconception about East Asian personalities. Westerners think the Chinese, Japanese, and Koreans have a far stronger work ethic than we do, and are so much more agreeable -- they certainly don't seem as violent and confrontational as we are. Let's go straight to the data.

You can browse the free PDF linked above to see a clearer picture, but here is the Cliff's Notes version. The top graph shows Agreeableness scores by global region, with East Asia on the far right, and the bottom is Conscientiousness. For now don't try reading the other regions, just focus on how East Asia is in a league of its own. 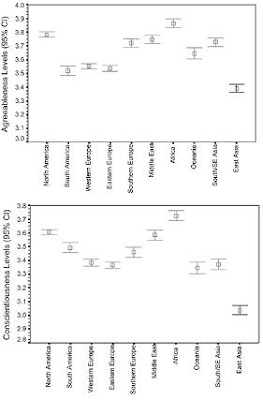 Those are 95% confidence intervals, so there is almost no overlap between the East Asian distribution and the others for Agreeableness. For Conscientiousness, it is not even close -- they might as well come from Mars.

The countries in East Asia include Japan, South Korea, Hong Kong, and Taiwan. Just about all countries are represented by college students. Given that college admissions is a proxy for IQ, and given that East Asians have the highest national IQs, the college student respondents there are closer to the average person, whereas in Africa they are totally unrepresentative (many of the African surveys weren't even given in the local language, suggesting they show what the educated elite is like). In the paper's Table 5 you can see scores by country rather than region, and all four East Asian countries are extremely low in both traits, so it's not like one of them is ruining it for the rest.

When I first saw results like these I was a bit puzzled too, but then I reflected on my extensive contact with East Asians over the years, and it didn't seem so odd. They aren't violent and don't get in your face, so we assume they're agreeable. In reality, they are autistic or misanthropic, they just don't let it show. But they have trouble making lots of friends in school, and the males either cannot relate to girls or have a bitter hatred of them, so that they remain virgins for life. I can't think of another group who showed such autism and misanthropy, and the graph above tells me I shouldn't bother looking.

As for their abysmal levels of conscientiousness, again we look at them and see them getting good grades and decent jobs, which you can't do without hard work. But that doesn't mean they have a solid work ethic or have learned the value of hard work. Those are values that you have internalized and that allow you to work independently toward achievement -- when tempted to cheat the rules or give up when the going gets tough, you feel compelled to play fair or keep slogging through it.

East Asians have evolved the opposite system -- they have outsourced all of that behavioral monitoring to some authority, such as their Tiger Mother parents, a council of elders, a bureaucracy, an emperor, or whatever. When they feel tempted to cheat or give up, they are not very capable of correcting themselves -- that authority monitor has to swoop in, shout in their face to play fair or persevere, and they do as they're told. They can still get things done, but not on their own, only by total deference to an authority with their interests in mind.

Here are some colorful real-world reminders of how lazy East Asians are when left to themselves:

There are millions of young Chinese boys that love video games and play them so much that the Chinese government enacted strict rules that limited playing time.

These rules impose penalties on players who spend more than three hours a day by reducing the abilities of their characters and any players that spend more than five hours simply are forced to take a five-hour break before they can return to a game.

Video gaming got so out of hand that the Chinese government opened video game addiction clinics and while it sounds extreme to me, these clinics used electro-shock treatments to zap players out of their addiction.

Asian countries, such as South Korea, are recognizing video game addiction as an urgent public health matter, with several deaths having occurred in internet cafes, apparently as a result of blood clots occurring during prolonged sitting at computers.

The IMRC found evidence that more than 27% of youth ages 12-18 in Japan were experiencing such medical problems as periodic headaches and fatigue, blurred vision, loss in appetite, and even clinical depression, all directly linked to extensive use of video games.

A South Korean couple who let their baby starve to death while raising a "virtual child" on the internet were given prison sentences on Friday.

The 41-year-old husband and his wife, 25, were arrested in March for leaving their daughter to die while they spent hours at internet cafes.

Not that Americans are immune to screwing around in pointless activities (like keeping a blog). Still, the total lack of personal drive in East Asians means they'll get sucked into zombifying activities to a far worse degree. Westerners will get restless sooner and feel like doing something more fun and productive.

It isn't just the lower tiers of Asian society that are like that. In his book Human Accomplishment, Charles Murray details and discusses how small of an impact East Asians have had in the arts, sciences, and applied fields like technology and medicine, compared to Western Eurasia. And remember they've got higher average IQs than other regions, so it is clearly more of a personality or temperament difference.

And not just openness or curiosity -- although that's bad enough there (see the paper, which shows East Asia in a league of its own in scoring low for Openness to Experience). To achieve something impressive, you can't rely on some external monitor to constantly browbeat you into thinking up new things, getting the small tasks done, and so on. You need an internal stick-to-it-iveness to blaze a trail.

All of this I see as an adaptation to intensive agriculture, the only thing that so strongly sets them apart from the rest of the world. According to the paper, the Ukraine actually resembles East Asia in personality. They were the breadbasket of Eastern Europe and had a heightened sense of themselves as agriculturalists, in stark contrast to the nomadic pastoralists from the Steppe who have regularly overrun their region.

Agriculture always leads to a hierarchical state, sometimes even a gigantic empire as in China. Part of this change is that there's now a stable class of bureaucrats who can monitor and enforce social norms. So people outsource morality -- that is, the regulation of social interactions -- to parents, experts, or whoever. This move toward amorality shows up in lowered Agreeableness and Conscientiousness. It doesn't mean they'll turn into violent hotheads, just that they've selected the moral lobe of their brain to shrink, since someone else will make them behave properly, not they themselves. That selects for an enlarged obedience lobe in the brain.

Pastoralists are the opposite, and indeed the Middle East and Balkans all score very highly on Agreeableness and Conscientiousness. It's not as crazy as it sounds, once we remember that Agreeableness and non-violence aren't the same thing. Persians do not have a free-floating level of misanthropy -- in fact, they are very hospitable, people-loving people. But if you get on their bad side, they feel the need to settle the score. It is the Culture of Honor, not the Culture of Autism and Misanthropy.

Lacking large, stable, hierarchical states, pastoralists have to rely on the Culture of Honor to settle disputes and the Culture of Hospitality to provide mutual aid. It also prevents them from outsourcing morality to bureaucrats -- animal herders are the prototypical rugged individualists, although they also rely on the hospitality of strangers when they get stranded. They have to monitor and motivate themselves. It is no accident that the major moral systems that have spread across the globe came from pastoralists -- those of the Proto-Indo-Europeans and their off-shoots (pagan Europe, Zoroastrianism, and Vedic Hinduism), and later and more successfully Christianity and Islam. Agriculturalists, whether the Northeast Asians, Ancient Egyptians, or Aztecs, never came close to exporting a moral system that broadly.

To wrap up with a thought from Nassim Taleb, I think this underscores how fragile a super-specialized system is, particularly one that involves so much outsourcing. It looks more stable and efficient in the short term, but it is much less robust to shocks. Again just look at video games -- people in the Balkans and Middle East have access to video games, internet cafes, and so on, just as the Chinese do, and the wealthier ones have at least as good access as the Koreans and Japanese do. Yet they aren't dropping like flies from video game addiction, porn addiction, etc.

Video games are like a new infectious disease that tests how truly robust the Asian system of behavioral monitoring is. If the Tiger Mother method were just as good as the self-motivating and self-monitoring method, then it should have resisted the infiltration of video games much better than it has. Instead it has unmasked the deplorable laziness of Asians when the Tiger Mother can't be breathing down their necks, or cut off their internet connection, etc. They sink into a mire of joyless addictions, whose depths the rest of the world cannot fathom.