From a bird's-eye-view the Northeast Asian peoples are all remarkably similar, lack of variation being a hallmark of intensive agriculture because taking risks does not pay off, only the same monotonous grind day-in and day-out. So a variety of types playing different strategies will not be maintained as they are in pastoralist or horticulturalist groups, where you can certainly do well by playing it safe, but where taking big risks is also a viable strategy.

Pastoralists can attempt raids for livestock to boost their material wealth, while horticulturalists can try raiding nearby groups for wives, not only boosting their wealth (since women do most food production in gardening societies) but their reproductive output too. Agriculturalists rely on land to settle and plant crops on, and that cannot be gotten so easily through a get rich quick scheme, unlike herd animals or women -- movable things that you can run off with. They also won't bother raiding for women because without more land in the first place, they'll have a hard time producing more food to feed another wife and set of children.

Still, there is variation among the Asians that's worth trying to explain. For example, why are South Koreans more out-and-about, pleasant, and likely to laugh around each other, compared to the Japanese or Chinese? I didn't get a very strong sense of that among the Korean-Americans I've known, but wherever there's a large concentration of foreign students from these three groups, the pattern is hard to miss. This particular set of differences would then seem to be related to something going on in South Korea, not to evolved differences shared between them and the diaspora.

A good idea continues to pay off no matter where or when you apply it. Given how much social change we can explain by whether the violence rate is steadily rising or falling, that's where we should turn first. I could only find data back to 1995, but what do you think the trend in South Korea's homicide rate looks like? 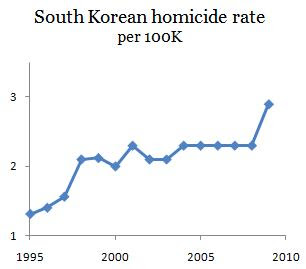 That's an increase of over 120% since 1995, and who knows how long it had been rising before then. China, Taiwan, Japan, and Singapore have all had falling murder rates over this time, and Japan's has been falling since at least the late 1920s. (Data not shown, but from here and here.) South Korea is truly unique among its neighbors in having a steadily rising violence rate.

So its people and culture should be taking a detour toward the kind of society that the West turns into when its murder rate begins rising. Koreans are more out-and-about and fun-loving, like Westerners during the Jazz Age and the New Wave Age. They've begun exporting movies based on revenge and the Culture of Honor (such as Oldboy), just like the vogue for such plays during the Elizabethan-Jacobean violence wave, or the vogue for dueling during the Romantic-Gothic violence wave, or all those vigilante movies from America in the '70s and '80s.

The flipside of a thirst for revenge is the Culture of Hospitality (re-paying kindness with kindness, and starting off kind). I'll write the whole thing up later, but I checked every country's entry in a Wiki for hitch-hiking around the world, and the South Koreans came off as the most hospitable to travelers among the East Asians (for example the people who pick you up might also invite you to rest for the night in their home).

And their religion in recent decades has steered more toward the supernatural, apocalyptic, and proselytizing strains of Christianity (after America, they have the most missionaries), plus the large New Age / cult movement of the Unification Church, still going strong. It's just like the fundamentalist and cult movements that sprung up in the West during the 1900s - 1920s, and then again during the '60s through the '80s.

I don't dig Asian girls, but the prediction from all the rest is that they should have more cool chicks than neighboring countries, like American girls were in the '60s, '70s, and '80s, in contrast to the colder, bossier, and more cocooning girls of the mid-century or the past 20 years. Anyone with yellow fever, chime in.

How do we know it's their rising violence rates and not something else special about them? Like maybe it's due to their cultural clash between them and North Korea -- but then Taiwan should look like them, and they don't. That follows from the murder rate idea, since Taiwan's has been falling like the rest of East Asia. The South Korean pattern fits in with the Western countries that saw rising homicide rates during the '60s through the '80s that were not, however, engaged in a clash of civilizations -- England, Italy, Australia, etc.

So what ties it all together is whether the violence rate is rising or falling. Not too surprising given everything I've written about over the past... two years or however long, but it's nice to have another case study, especially from outside of Western Europe and its off-shoots.