Scrolling through your Facebook feed is more boring than wading through emails back in the day, which at least had some point. So imagine the joy when I saw this hidden in there: 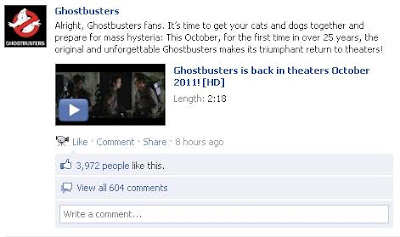 Thank Jesus it's not another remake, and it looks like they aren't cluttering it with lame CGI like Lucas did when the original Star Wars trilogy was re-released in theaters.

If I saw Ghostbusters when it first came out, I was too young to remember it, although I clearly recall going to see the sequel. Watching it millions of times on home video or DVD has been great fun, but it has so much action and spectacle that it needs to be seen on the big screen. Not to mention the carnival-crowd feeling you get in a packed theater -- a PKE surge of incredible, even dangerous proportions.

I hope they do this with more classics. Against the new norm of one horrible movie after another, this would be guaranteed to lure me back into regular attendance. Here's to hoping next year sees a re-release of RoboCop for its 25th anniversary.