One of those things that Everyone Knows Causes Violence is income equality, a slightly more highbrow version of the "poverty causes crime" canard. According to the theory, as the lower tiers of society see a greater gap between themselves and the upper tiers, they're more likely to feel envious, to feel like life's contests are more winner-take-all, etc., which makes them more willing to use violence in daily life.

Time to see what the data say. Cross-sectional data -- comparing one area to another during the same time -- tells us nothing about cause and effect, since there are always scores of variables we haven't accounted for. So we look at time-series data instead. 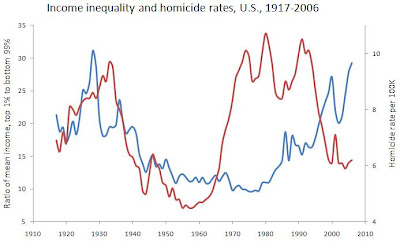 The red line shows the American homicide rate, and the blue line shows one measure of income inequality (they all look basically the same), namely the ratio of average incomes of the top 1% compared to the bottom 99%.

If inequality drives crime, then changes in inequality should be linked to changes in crime. It's clear from the graph that there's no relationship. The apparent relationship from the late 1910s through the mid-1950s vanishes from then until now, and indeed we can see several periods in the past 50 years when they went in opposite directions for awhile.

A plot of yearly changes in inequality against yearly changes in the homicide rate (not shown) looks like a snowstorm -- no correlation one way or the other. Again just by eyeballing it, we can tell it won't make a difference if we look at the change in crime some years after a change in inequality. It's not as though the red line looked like the blue line, only delayed by several years.

As our society grows more obsessed with social science, most people who warn against some trend frame it as "It will increase the quantity of Negative Social Indicators." That leaves it open to simple empirical attack. Just by downloading some data from the internet and dorking around with Excel, someone like me can yank the carpet right from under them.

What ever happened to "We don't want greater inequality because it feels rotten to live in that society?" No empirical claim, other than the obvious one that people prefer not to live in more pyramid-shaped nations. It's akin to the wisdom of our disgust instinct: you don't have to justify it in other terms, you just don't want some things to be served to you.