GameFAQS has had some interesting polls lately. They get tens of thousands of responses from video game fans across the nation and even the world, and they tend to be on the younger side (under 30). Admittedly this will give non-representative results if the questions have to do with video games or related aspects of their lives, like being shut-ins. But other questions would seem to get fairly representative results.

First, for the poll asking "Are you following the World Cup this year," I took those who gave any of three affirmative responses. These are expressed as deviations from the national average of 46% who followed along. Browner colors mean higher viewership, bluer ones mean lower. 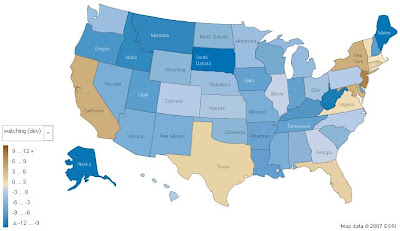 This is more or less a Red State / Blue State or bi-coastal / inland difference. No real surprise there. Nevertheless, the lowest rates were still as high as 1/3 watching, while the highest rates gave a slim majority to soccer fans.

Next is belief in ghosts, allowing for either of two affirmative responses: 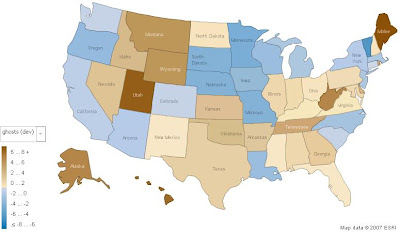 The pattern isn't so clear here. There's something of a Red State / Blue State picture, but not very strong. Most of the Eastern U.S. is around the national average of 32% who believe, with two exceptions -- Maine is very high and Vermont very low. The central strip of the country generally shows greater doubt in the north and greater belief in the south. The West coast is doubtful, too. The only area that fairly consistently believes in ghosts is the Mountain region, explaining their great interest in folklore.

Lastly, here is belief in psychic powers, allowing for either of two affirmative responses: 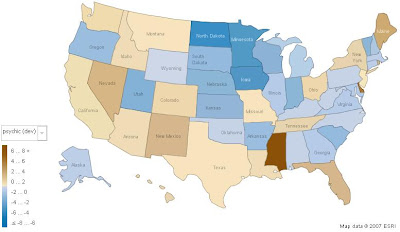