The pastoral and small-town romance flourish during dangerous times

When the world becomes more dangerous, some places that started fairly frightening will become intolerably scary to most people, and they will seek an escape to some safer place. Urban areas have been more ridden with crime, so it would be no surprise if during upswings in violence people began wanting to live in more suburban or rural areas, perhaps returning to the city after the violence level drops down again. Combine this with the overall carpe diem mindset that prevails during dangerous times, when you may be done in at any moment, and this preference for outside-of-urban living becomes colored by a longing or romance for unspoiled natural sanctuaries. When the society recovers from the surge in violence, people will return to their contempt for hicks in the sticks and glorify the metropolis once more.

Indeed, the history of the pastoral confirms this. It was popular during the rising-crime times of the 14th C., the Elizabethan and Jacobean periods, the Romantic era, and in a modified form during the recent wild times of the 1960s through the 1980s. Not surprisingly, the pastoral was mocked once these dangerous times came to an end, as the culture shifted back to petty status contests among those seeking urban sophistication.

While there are no good data for homicide rates before 1200, it looks like the periods of literature that focus on The Big Themes accompany rises in violence rates. More, they seem to go through a 200-year cycle: late 20th C., ca. 1800, ca. 1600, and late 14th C. If we extrapolate this cycle backwards, we would hit the troubadours of the 12th C., Virgil's Eclogues of the 1st C. B.C., and Theocritus' Bucolics of the 3rd C. B.C. Although speculative, it would fit the larger pattern.

During the most recent widespread wave of violence, the '60s through the '80s, the shepherd's way of life had all but vanished in Western societies. So how did people meet their need for pastoral romance? The closest place they had was small-town America, and whether it was more rural or suburban didn't matter as long as it wasn't the crime-crusted cesspool of the city. The modern descendant of the shepherd is a flying-solo, nomadic sweet-talker who preaches the carpe diem philosophy. The modern milkmaid is the All-American girl next door from the heartland, initially reluctant to trust the tongue of the shepherd but ultimately powerless to resist his fun-loving charm.

Probably the most well known modern writer of bucolic songs is John Cougar Mellencamp, who named one of his songs "Small Town," although just about all could have been so titled. His 1982 hit "Jack & Diane" is the most recent reincarnation of Marlowe's "Passionate Shepherd to His Love." The music video has plenty of pastoral pictures, in case you didn't get it. When was the last time you heard a song like that? I couldn't say, but I'd predict no later than 1991 or '92 -- "suckin' on a chili dog" would clash horribly with imitating the gals from Sex and the City or striking your best metrosexual pose. The last image of this genre that sticks in my mind is not Jack and Diane but Zack and Kelly aspiring to a pastoral prom night (notice the simplicity of their clothing, considering the occasion): 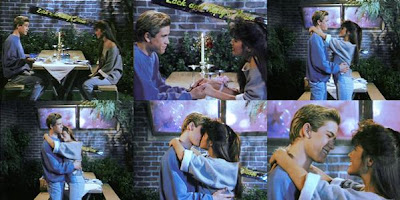 The triumph of the New Urbanist movement in community planning shows how dead our earlier romance for suburbia is, for it could not have succeeded unless the public was willing to tolerate it or actively seek it out. Now communities are going to devolve back to the dense mixed-use towns of the 1950s where there's little room for escape and no sense of the great outdoors in your own back yard. (And earlier I showed that park visits have been falling since the early-mid 1990s.) No locus amoenus in the form of a stream that runs through the woods behind your high school where teenagers would run off to for a make-out session. And you have to admit that "the girl in the next apartment over" doesn't sound very romantic.

Ever since the gentrification craze began during the 1990s, there has been much revisionist history of suburbia -- that it was boring, alienating, bla bla bla. In reality, suburban life during wild times was filled with exciting things to do, and people -- especially young people -- were outside socializing and playing all the time. Even iconic Gen X-ers like Smashing Pumpkins show sincere nostalgia for that time and place in the lyrics and video for their song "1979," one of the few good songs in the alternative genre (a good number of the others are by them too).

Despite this recent poo-poo-ing of suburbia, history will have the last laugh. After all, human beings evolved mostly in hunter-gatherer or rural agrarian and pastoral societies, not dense urban ones, so we have a natural love of the former settings, what the sociobiologist E.O. Wilson calls "biophilia." Stories and pictures about that way of life have and will continue to endure throughout the centuries, while the accounts of sophisticated cityfolk like Samuel Pepys and Doctor Johnson will be judged trivial in comparison.

New comments are not allowed.