Map of night owls across America

In the comments to the last post about how pastoralism should have selected for more night owlish schedules, pzed points to a study of American sleep patterns which shows that whites, Hispanics, and blacks follow similar hours but that Asians wake up and go to bed a bit later. I'm not sure this is the best test of whether pastoralism affects circadian rhythm since pastoralism vs. farming vs. hunting and gathering is a sub-racial distinction. That is, there are all sorts of other things that differ among the three major races that could affect sleep schedules. Ideally we'd want to compare pastoralist vs. non-pastoralists within Europe, within sub-Saharan Africa, within South Asia, within East Asia, etc., to try to compare apples to apples.

Luckily GameFAQS recently polled their users about when they wake up, so at least we can compare the different states of the U.S. I took the "noon or later" response as the cut-off for night owls. Nationally 13% chose this answer. Here is a map of how each state compared relative to this national average, where browner states wake up later: 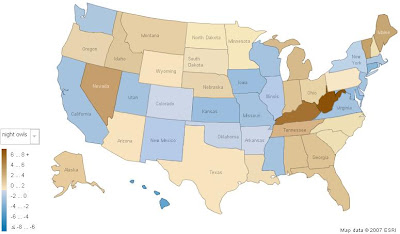 This is pretty close to a map of Scottish, Irish, and Scotch-Irish (Ulster Scots) ancestry. (Type any into google images along with "map.") Pastoralism, of course, has historically played a larger role in these people's homelands than in most other European areas. For example, look at the regions featured at the European Forum on Nature Conservation and Pastoralism.

The English Puritans in the Northeast -- aside from the heavily Scotch-Irish far Northeast -- wake up earlier than the national average, as do most of their ethnic off-shoots further out west. The Southeast and upper part of the Mountain states, along with bits of the Pacific Northwest, are late risers. But the most night owlish by far are the hillbillies in West Virginia, followed closely by their brethren in Kentucky. The various Celtic groups who moved to Appalachia found an ecology fairly similar to that of their homelands, and their pastoralist-influenced traits (such as the "culture of honor") have probably remained strongest there for this reason -- they didn't have to adapt to a wildly different environment.

When we take a finer-grained look at which groups keep later hours, it looks like the ones with a stronger history of pastoralism are indeed more nocturnal.