Being offensive is not the same as being wild

In the comments to the post below, TGGP asks about some apparent counter-examples to the decline in wildness -- cartoons like Beavis and Butt-head, South Park, and Family Guy, as well as more sexually explicit song lyrics (like, say, this one by 2 Live Crew) that became increasingly popular during the 1990s and 2000s.

As I said, I don't find those cartoons wild at all: they're about a bunch of dorks with no lives who sit around swearing and picking their nose to try to shock normal people. The loser male characters never interact with girls and only occasionally get into any reckless fun. Quagmire from Family Guy is an exception, but in typical Generation X fashion the only guy with any kind of sex life is enviously depicted as an immoral crypto-rapist. Shoot, Heathcliff and Riff-Raff were getting more tail than Beavis and Cartman.

To help visualize the difference, let's look at the combinations of low vs. high wildness and low vs. high offensiveness, both for song lyrics and popular movies: 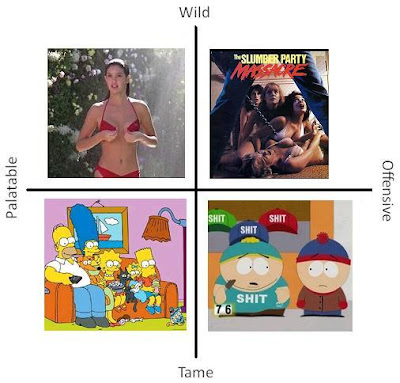 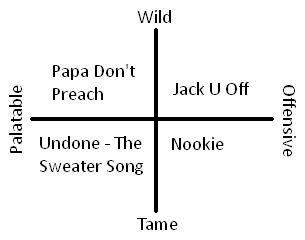 If wildness and offensiveness were highly correlated, we'd find most cultural products in the lower-left and upper-right areas. But we find lots of stuff in the other two. In fact, most of what we think of as '80s pop culture is in the upper-left, and most of the '90s pop culture goes in the lower-right. So the two traits seem pretty independent of each other.

We find plenty of things meant to shock and offend at any given time, although there does seem to be a shift starting in the '90s toward more shocking and offensive popular culture. Again, it's only the people who aren't having any fun to begin with who labor to be generally offensive (not as in tearing down sacred cows). But what's even clearer is the shift from a wild to a tame culture starting around 1991. Even the really offensive stuff from the past 20 years isn't chock full of T&A, young people out joyriding, toilet-papering the neighbor's house, and so on. And similarly, even the non-offensive stuff from the '70s and '80s had lots of wild behavior.

Probably the greatest example of the decline in non-offensive yet wild popular culture is the death of the action comedy genre in movies. The first Rush Hour movie was OK, but other than that it's been pathetic. No more Raiders of the Lost Ark, Ghostbusters, Beverly Hills Cop, The Goonies, Stripes, Spaceballs, and on and on. An overly cautious culture is not capable of producing the rule-bending action required for such movies to work. The disappearance of teen movies is another good example of the upper-left area going away. Even the few good ones from the post-'91 era don't feature wild and crazy kids: there's very little of a "sex, drugs, and rock 'n' roll" atmosphere in Clueless or Mean Girls (unlike the original Heathers, where the high school people are more sexually active, given to pranks, and smoke and drink).

The post-'91 culture -- less fun and more offensive. It's no wonder no one's going to re-visit any of this junk once enough time passes for it to fall out of fashion.