One reason that lesbians have so little influence on the larger culture, compared to gay men, is the narcissism gap -- it's tough to capture straight people's attention if your style is more laconic than preening. Now, your sheltered impression may be that queer men exploit this skill mostly to monopolize your group's conversations, but the sophisticated recognize that they employ it in service of a higher calling: raising awareness.

In the most recent effort to enlighten us breeders about how dangerous we are to gays, a duo from Alberta, Canada have journeyed to New York to perform Bash'd, a "hip-hop musical about gay marriage and gay bashing." While I cannot see and review it personally, this bit from the NYT sums it up rather nicely:

With exceedingly bawdy lyrics, two rapping angels, T-Bag (Mr. Craddock) and Feminem (Mr. Cuckow), recount the tragedy of a Canadian couple, Jack and Dillon, who meet in an Edmonton club, fall in love and wed. But when Jack becomes the victim of violence, their idyll collapses.

Angels, couple, falling in love, wedding, idyll, and tragedy caused by straights -- gosh, only a bigoted Fascist would choose other words to describe an always-shifting web of butt buddies and epidemic diseases. Back on planet Earth, we discover an only slightly different account. * 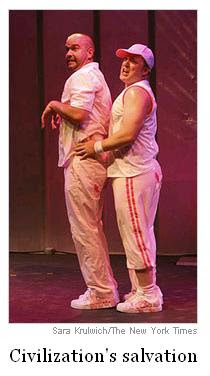 And why rap, of all genres?

"It was a way to turn hip-hop on its head," Mr. Craddock said, "because of the ultramasculinity of it, but also to take it back to its roots, to back when hip-hop was a tool of social justice, speaking out against poverty and oppression."

Something that never dawns on naive White activists is that there is no such thing as "identifying with someone else's oppression," as identity politics is nothing more than whining and clamoring for an unfair slice of the pie -- and louder and more insistent queers only divert more of our limited public and private resources away from race racketeers.

By the way, the use of art as "a tool of social justice" has a shorter name: propaganda. But surely perverting art is OK as long as the ills it alleviates are pandemic, right?

Well, I'll grant you "pushed down" and "violated," but I hardly see what straight people have to do with that. As in all other cases of the personal being political, you are your own worst enemies.

Let me present my own history of STDs. From 1973, when I came out, to 1975, I only got mononucloeosis and non-specific urethritis, or NSU. In 1975, I got my first case of gonorrhea. Not bad, I thought. I'd had maybe 200 different partners, and I'd only gotten the clap twice. But then, moving from Boston to New York City, it all began to snowball.

At age twenty-seven I've had: gonorrhea, syphillis, hepatitis A, hepatitis B, and hepatitis non-A, non-B; intestinal parasites including amebiasis, e. historicia, shigella, giardia; herpes simplex types one and two; venereal warts, mononucleosis, cytomegalovirus, and now cryptosporodiosis, for which there is no known cure.