When Immanuel Kant was 40 years old -- before he developed the hyper-regulated lifestyle for which he is now famous, and before his later philosophy turned to the Platonic divorce of sensory pleasure from our conception of beauty -- he wrote a work on aesthetics that was brief, lively, and little libidinous. That is, not the Kant you read in Philosophy 101. Observations on the Feeling of the Beautiful and the Sublime contains in it his perception of the aesthetic preferences and national characters of various ethnic groups, unified by the idea that Galenic personality types would tend to prefer certain types of art over others. In particular, those who were Introverted and Emotionally Stable are thought not to have preferences one way or another; Emotionally Stable Extraverts prefer the Beautiful; Emotionally Unstable Extraverts prefer the Noble Sublime; while Emotionally Unstable Introverts prefer the Terrifying Sublime. Personality traits have unfortunate names: though "extraversion" and "emotionally stable" are easily understood, "introversion" doesn't imply shyness but a preference to keep to oneself, and "emotionally unstable" or "neurotic" doesn't imply being bipolar but simply having a short fuse or being easily disturbed or upset.

(As an aside, a recent study to test this idea among Spanish and English university students somewhat supported the hypotheses that preferences were related to Sensation Seeking and Openness to Experience, but this area appears to be little researched. Another article from Poland.)

In my post on global variation in personality, there's a succint graphic summarizing the findings of Lynn & Martin (1995), which shows that on average the Spanish are noticeably more Introverted than other Mediterranean populations, although all of the Mediterranean averages are on the Emotionally Unstable side of the spectrum: 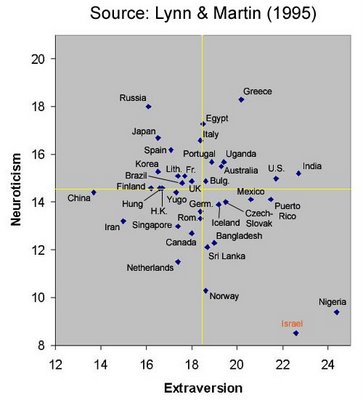 Hindsight is 20/20: I initially felt the Spanish were pretty Extraverted, but I made the classic error of actor-observer bias by basing this belief on my observations of Spaniards interacting with their friends & family members, the kind of thing you typically see walking about or sitting in restaurants. However, you expect any type of person to be sociable and cheery among friends and family! A better test of Introversion vs Extraversion would thus be how gregarious a person is with strangers, and that's not something you can easily discern when observing others. Even if you tried to study this by interacting with them, they may simply present a more Extraverted persona to you as a rule of social ettiquette, much like a Japanese person must appear very agreeable in person even if their inclination is to be uncooperative. Private questionnaires are the most reliable method. One other personal observation that many female friends & acquaintances of mine mentioned was that Spanish men were unlikely to accost and pursue female strangers relentlessly, in contrast to Italian men. For anyone who's visited these countries, this is a pretty stark contrast and reflects in part the higher Extraversion of Italians.

Based on their mean personality, then, Kant predicted that Spaniards would enjoy the Terrifying Sublime (which is just what it sounds like). He cited as evidence the practice of the auto da fe -- he was grasping at straws, perhaps, but he wrote this in 1764, when Goya was still busy applying to art school. Clearly, average personality can change quickly over time, due to population genetic factors such as selection and migration that alter allele frequencies that are relevant to personality traits, as well as changes in relevant aspects of the environment (for example, the presence of pathogens, changes in social institutions, and so on). Therefore, we shouldn't project current Spanish mean personality too far back into the past.

But if we look at the roughly 250 years that have passed since Kant published Observations, Spanish high art has tended to focus more on the Terrifying Sublime than on the Noble Sublime or the Beautiful, beginning with the obsessions with the grotesque and macabre from the deaf madman himself (e.g., the Black Paintings) and continuing into the work of Dali, and most of Picasso as well. Before Goya, Velazquez did not focus on the Terrifying Sublime, and though El Greco did, he was an ethnic Greek. As for architecture, I don't know how to classify Gaudi's work since it's both unsettling yet playful, like Lewis Carroll's writing. If forced to choose, I'd put it in the Terrifying Sublime direction but with very low magnitude. Spanish filmmakers also nearly exclusively specialize in horror, the grotesque, the bizarre, kitsch, and dark comedy (e.g., Buñuel, Amenabar, Almodovar). Of course, these trends were prevalent elsewhere in Europe, but among populations that are close to the center of the graphic above, the output was more varied -- France produced both the Symbolists and the Impressionists, for instance. But if it's well known and comes from Spain, it is likely of the Terrifying Sublime type.

Aside from what they themselves have produced, Spaniards more than most other European groups tend to prefer the sort of cultural products that you'd expect an Emotionally Unstable Introvert to enjoy: droll, bizarre humor of the Monty Python variety; Woody Allen films, whose premises always spring from their director's status as the arch-Neurotic Introvert; music by groups like The Cure, who are easily one of the most popular among young people; and the adorable grotesque that Tim Burton has become famous for -- Edward Scissorhands is particularly popular. When I was in Rome, I noticed zero sex shops; if there were any, they were vanilla enough not to stand out. Barcelona and Madrid, however, are pretty well known for their non-trivial sub-cultures of bondage & discipline and the like, with window dressings of some stores featuring PVC bodysuits even in neighborhoods that aren't seedy. One of Almodovar's hit movies is titled Atame! (lit. "tie me up!"), and indeed there is even a restaurant or bar or somesuch in an upscale neighborhood in Barcelona called "Atame!"

Perhaps part of the reason is that Introverts, not preferring to mingle with large groups of real people, are more likely to turn to inner fantasy lands instead. In any event, note also that the preferences detailed in the previous paragraph (both the normal and out-there) are also quite prevalent among the Japanese, whose mean also lies in the Emotionally Unstable Introvert quadrant. So does that of Russia, but I don't know enough about Russian culture to comment on their cultural output and preferences. My guess from what little I've sampled is that they would group with the Spanish and Japanese, but I don't know.

For all of these reasons, I think people who happen upon Spanish culture from a distance (during their university days, browsing through books in their public library, etc.), or who happen to visit the country for more than a day or two, end up surprised -- they were expecting something like Latin America or Italy, and though that may be true for the climate, with respect to everything else, it's more like what they'd expect France to be like. Much of this shock must be due to basing one's a priori expectations on groups that are more Extraverted than the Spanish, as well as basing it on the Spaniards' well deserved reputation as the most hardcore partiers of Europe and most of the world. But basing expectations on rare events like Saturday night parties or national holidays can easily lead you astray: people are supposed to engage in debauchery on such occasions. Japanese businessmen have a reputation for getting piss drunk and going wild, though such behavior is belied by their day-to-day carryings-on. Moreover, alcohol is a central nervous system depressant, so it has the opposite effect of stimulants. That is, alcohol puts you in a good mood, loosens your inhibitions, compels you to mingle and become chatty -- in short, alcohol turns Introverts into temporary Extraverts. (Stimulants like Ritalin do the reverse by turning uber-Extraverts into temporary bookish Introverts.) So, don't judge whether someone is gregarious or not when they're drunk.

After these people discover the unexpected, one of two things happens: either 1) they admire the spirit of revelry that Spaniards show on Saturday night, but find the rest of the culture and the population a bit boring; or 2) they drift closer, pleasantly intrigued that such beautiful people who inhabit such an enviable climate could nevertheless produce so many curmudgeons, bookworms, and weirdos who prefer The Cure and Edward Scissorhands. Returning to a recurrent theme here at this blog, Spain is the one place (maybe along with Paris) where I felt my proclivities would not prevent me from attaining an attractive girlfriend or wife. It's the only place where genuinely hot girls have hit on me, a subject I touched on here. And I don't mean "attractive" as in, "Yeah, she's attractive." I mean as in, "I want to slowly savor the flesh of her ambrosial lips while her eyes drizzle their nectarous gaze into my parched pupils."

Sure, personality, intelligence, interests not mutually exclusive to my own -- these are all essential qualities to look for in a mate, and though I could easily find someone who fit the bill on these traits in the US, I would have to sacrifice good looks. (Note: not because good looks don't overlap with the other traits, but because such a person would have more stringent requirements of her suitors, given her greater rarity here as compared to in Spain.) If possible, I'd prefer if I didn't have to make the trade-off. Also, given that it would be easier to find someone in Spain who met my preferences for the non-superficial criteria -- for example, finding someone who has a favorite writer, even if it were, gulp, a novelist -- I feel much more in good spirits around Spanish girls. You generally feel that way around the conspecifics that you have respect for, after all; and it's hard to hold a high opinion of females who by and large have chosen to join men instead of beating them, by turning courtship into an interview process to hire their trophy husband. It wouldn't be difficult either to find a cultured, attractive wife in Italy or the well-to-do areas of Lebanon, but trying to find one who also preferred a little nuttiness in her husband might be a bit more difficult in the Mediterranean. The exception being the land that produced Penelope Cruz: "Spain," its tourism industry used to boast, "is different!"