Kids these days: Dancing and sex

Half-Sigma comments on a recent NYT article regarding the crackdown some high school principals have initiated to curb "pornographic dancing styles" at school dances. There are two distinct but related reactions from adults in the NYT article and in the comments at HS' post:

1a) A Bayesian shock to the effect that, "I never would've expected to see kids dancing this way!"

1b) A moral argument that kids shouldn't be allowed to dance in such suggestive ways.

The kids have, in turn, responded with:

2a) If you opened your eyes and thought clearly, you wouldn't be so shocked!

2b) No one's being harmed. More, trying to stop us is futile.

I don't want to dwell long on the moral debate, but in brief, I find nothing objectionable about teenagers bumping & grinding. No one will get pregnant, get an STD, or become psychologically scarred from gyrating their body in close contact with that of another while fully clothed. Since most of the force of the moral argument hinges on the assumption that pornographic dancing will lead to sex, even if only probabilistically, the onus is on the proponents of cracking down on "freak dancing" to demonstrate that such dancing increases the risk of having sex among teenagers. Predictably, no evidence is presented to this effect, and there is good a priori reason to believe that suggestive dancing doesn't increase the risk of having sex -- which is that sexually suggestive dancing, combined with loud music, gabbing excitedly with one's friends, and perhaps some french kissing, may be enough to satiate teenagers' desire for some degree of debauchery, such that the thrill of having sex wouldn't add much more to the overall thrill value (diminishing returns). Teenagers may not be perfect rational agents, but they're smart enough to figure out that choosing a potentially high-cost activity that's expected to add little value is a dumb decision. To be more accurate, it's only the girls who need to think this way / be satiated by dancing, music, gabbing, and kissing, since their desires are the limiting factor on how much sex will take place. As many a club-hopping guy has lamented: would that risque dancing led even probabilistically toward intercourse! I'll get to whether teens actually are having more sex or not in a moment.

Playing devil's advocate for a second, though, let's say there was convincing evidence that freak dancing increased the risk for having sex. Does it follow that cracking down on such dancing would decrease the rate of sex among teens? Nope: it would remain to be shown that school dance raciness wouldn't just be displaced to some other location / activity that would lead to sex. For example, they might just meet up at the house of a kid whose parents were out of town that weekend, or behind the bleachers at school, or in the woods next to their house, or in the bathroom at Chipotle, or wherever else. Similarly, if someone weaned themselves from smoking daily by taking up a daily drink instead, the effect on their health of quitting cigarettes could well be a wash. Indeed, only adults who don't have children of their own, or who haven't reared someone else's children (e.g., by being a teacher), would honestly believe that hotheaded teenagers wouldn't find a way around a proscription against X; typically they opt for Y, a substitute for X that isn't forbidden. A plan that targeted all likely outlets of teenage sexual exploration might achieve good results, though implementing it in practice might prove difficult, and it would need to be shown that all the time, money, and effort expended in this chore wouldn't be used better in some other way. Don't think that teenagers are stupid on this matter, by the way:

“If you tell a kid to do something, they do what they want to anyway and probably do it 10 times more,” said Emily Bragdon, 16, a junior who was at the dance.

This observation could've come from the mouth of any headstrong adolescent (though the "10 times more" is surely an exaggeration).

Moving on to the empirical issue of whether or not teenagers are behaving more wantonly regarding sex, which is the basis for the Bayesian shock, a huge global survey on sexual behavior was published in The Lancet last month. Among other data, it contains longitudinal data on the prevalence of "early" sexual intercourse (defined as having intercourse before age 15). This seems an apt statistic to look at for our purposes. Here is their Figure 1, which shows what percentage of females (above) and males (below) had had sexual intercourse before age 15, examining those who were born from 1960-64 (lavender bars) vs. those born from 1980-84 (red bars). The 7 developed countries surveyed are at the far right. 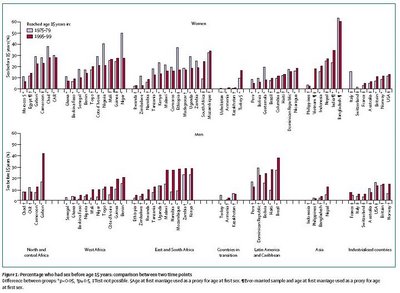 Lest there be any confusion, these bars do not represent a mean or median -- we know that a small change in the mean can have pronounced effects at the tails, but these bars are the tails, i.e. those who've had sex before 15. Going backward through the "tail effect" argument, a change in the tails of size X implies a change in the mean of size much less than X (since the probability of tail values falls off proportional to the squared distance from the mean), or no change in the mean but a slight change in variance. No matter how you slice it, whatever purportedly earth-shaking shift has occurred in teenage dancing styles has evidently had little effect on having sex. "Kids these days" are not markedly more lascivious than in days of yore.

However, all this talk about kids from one generation or another during the 20th C is, in the end, a bunch of idle chatter. The most convincing evidence that adolescent homo sapiens have been engaging in sexual exploration for far longer is that adolescence is, by most definitions, the time when a person is prepared and motivated to mate and reproduce. If teenagers behaving sexually were a recent invention -- caused, no doubt, by the rising popularity of MTV -- then how to resolve the damning counterevidence that humans mature sexually at around age 13-15 (or perhaps somewhat earlier when nutrition is better)? It would be as if humans were fully capable of understanding the speech of others and of producing their own meaningful utterances by roughly age 4, but covered their ears anytime someone spoke, and refused to speak themselves, until age 10. The fact that humans are on average able to put their linguistic capacity to good use by age 4 is all the evidence one needs that this is the age at which humans have begun communicating, stretching back into our evolutionary history. Again, this empirical matter should not be confused with the moral one -- just because a bird is fully fledged at age X has no bearing pro or con on whether or not it should or ought to fly / leave the nest / etc. at age X. I only mention the evolutionary angle since some adults are apparently shocked to behold teenagers behaving the way teenagers will behave.

A further cause for debunking this example of a "kids these days" myth is that it is closely related to another such myth, a perennial favorite at 2blowhards (no offense; just an observation), that the youths of today are more exhibitionistic and/or salacious. The usual evidence is the way young people act on MySpace, YouTube, and similar websites. Apropos of the teeange dirty dancing theme, here is a (probably NSFW) video that ranks 7 of 186 in the YouTube search results for "bump grind," showing a pack of 16 year-old girls dancing provocatively (though fully clothed) in front of a mirror. If I were so inclined, I could find hundreds of similar YouTube videos, and thousands of such pictures scattered throughout the MySpace galaxy. I don't find anything about it shocking, not just because I'm 26 rather than 66 -- I will not be shocked by teenage exhibitionism then either. The only thing that has changed is the technology: it is just easier to detect who is and isn't an exhibitionist in the internet age.

I find this development promising, as it means that, although levels of attention-seeking and acting-out are unlikely to change in the near future, at least the outlets into which these impulses are channeled will be more cyber than real. If I had an attention-seeking daughter, I'd rather she dance provocatively for her YouTube clips and get an ego boost that way, as opposed to kissing lots of boys and/or sleeping around at school. Given how large the potential pool of fawners is online -- basically all teenage boys who are connected to the internet, rather than only the boys at her school -- and given how much safer online exhibitionism is (no danger of being groped), she'd have to be silly not to prefer attention-whoring via YouTube or MySpace over the real-world alternative. And obviously, if my daughter didn't have an exhibitionistic disposition, I wouldn't have cause to worry in the first place.

To conclude, I'm sympathetic to the concern that adults have over teenagers behaving sexually; I just require that they state their arguments openly and that they be based on some degree of factual evidence and logical reasoning, the way they were supposed to learn how to write a persuasive essay back in sixth grade. By "stating their arguments openly," I mean come right out and say that they want to check the adolescents' primal urges -- no rationalizations that nature didn't intend it, that they can't appreciate the consequences of bumping & grinding, and so on. I realize that the rhetorical effect is more disarming when the adult assumes the role of a shepherd preventing the ignorant, helpless sheep from straying into harm's way -- the way a parent yanks a toddler away from a busy street -- but the reality is that the adult in this case is like a governor or prison warden who is doing their best to tame the bestial instincts of his self-aware, strong-willed charges.

Similarly, after the rhetoric has been removed, there must lie a solid core of fact and logic. Crucial assumptions must be shown to be at least on the right track. Should there be no convincing evidence that X leads to Y, or that cracking down on X would lead to a decrease in Y, then the proponent must admit that there is "no good reason" for his stance, except that "You'll do as I say." Moreover, if one wants to express shock, the evidence that something exceptional has occurred had better be obvious; or if not, then evidence should be presented. Now if parents view their role as, in certain occasions, reining in beasts and commanding them to obey regardless of "good reasons," that's nobody's business but their own, assuming they're not harming their children. But obfuscation is irritating, and combined with condescension, even more so. And I take it for granted that authority figures who want to prevent their wards from doing as they choose should provide justification, so that any assumptions may be challenged by those who don't agree, not least of all their powerless wards.