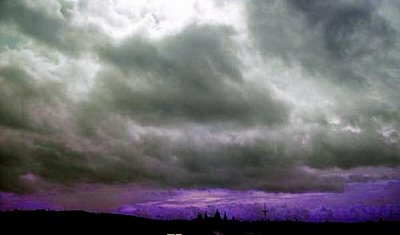 View from our terrace in Barna, October 18, 2004. I photoshopped the purple color in, but otherwise it really was this ominous. You could see the Palau Nacional of Montjuic and Calatrava's overhyped Telecommunications Tower from our apartment 20 or 30 blocks away in Eixample Esquerra. That's one of the great things about a city with no skyscrapers and high-rises.

I paid 350 Euros per month in rent, plus less than 50 Euros per month more for internet and utilitities, though of course I lived with roommates. If I wanted to pay $400 or even $500 a month here in the DC area (or in any large US city), I might be lucky to live in a garage in the ghetto, though I might be able to live in a safer and more enjoyable place by renting out someone's closet in Georgetown. A 10-trip metro ticket cost about 5 Euros, and each trip took you as far as you wanted to go. Here $5 on the metro would take me from where I am to the center of DC and back, not to mention the $4 parking fee. (The DC metro is also uglier, services fewer stops, runs less frequently, and lacks sufficient interconnection among the lines.) And the tomatoes! I figured the pricey stuff at Whole Foods or Trader Joes would be similar, but they don't compare to what you can pick up from the Spanish equivalent of Safeway (or Kroger, etc.). Attractive girls who aren't stuck up because they don't realize how attractive they are, since they're comparing themselves to a better-looking local group. And Saturday nights -- they deserve a separate posting entirely!

Then I come back here to the aforementioned overpriced everything, my neighborhood that's quickly transforming into an illegal immigrant haven (almost all of the stores at the nearby shopping center are completely different from when we moved here 14 years ago, now catering to illegals), my local high school that's just five minutes away which apparently has a gang problem now -- it's becoming more NY-LA-ish, which is to say more like Latin America, where a mostly unemployable underclass supports a huge low-brow industry, while the finer things keep increasing in price as the yuppies struggle to outcompete each other in conspicuous consumption. Most produce in affordable grocery stores is barefly fit for fodder, so anyone who isn't making six figures must sacrifice a hefty chunk of their income to buy palatable -- not exquisite -- stuff from Whole Foods or wherever else. Same is true of living space, transportation, you name it. My area, and from what I can tell many others (especially in southern California), would best be captured by a Crate and Barrel store that housed an illegal immigrant dive bar in the basement.

Someone ought to divert the Potomac River to flush out all the feculence from this stable for the low-brow and yuppie herds that is the new & improved Washington metro area.