Fashion models are butt girls, not boob girls, same as other kinesthetic performers

After looking back on the death of fashion during the 2010s, I couldn't resist going back to watch Project Runway from its late 2000s heyday (on DailyMotion). I began with season 3, whose winner, Jeffrey Sebelia, epitomized the era's edgy rocker chic. So many things about the fashion / style ecosystem stood out, now that there's such a stark contrast to the past 10 years when the industry has disappeared.

Sticking to just one of those topics for now, I was surprised to see how much the fashion models leaned toward the butt girl side of the boobs-vs.-butts spectrum. Back when I watched the show regularly, I would've dismissed the idea because none of them have big round rumps, thick thighs, or anything like that. They're so thin!

However, when it's framed in relative terms, as I've done during my ongoing study of the two types of girls (and the two types of guys who like them), it's obvious. When you are basically flat-chested, even a modest tushy qualifies you as a butt girl. And it's not just their proportions in a static pose, but which region they emphasize more. There again, it's so clear that they're drawing more attention to their buns rather than their bust. The pendulous swing of their hips, the flexing of their (mini) glutes that's visible through the fabric, and the overall emphasis on their lower half while strutting.

I noticed this especially from Clarissa, who was also briefly an NFL cheerleader before moving to New York for modeling. (More on the connection between models and gymnasts, dancers, etc., below.)

If they wanted attention to go to their chest, they would be raising and lowering their torso to make them bounce, or pushing either shoulder forward in alternation to make their boobs swing, or leaning forward toward the viewer to dangle the hypnotic object before their eyes. Instead, their gait is defined by an almost rigid torso, restrained arm movements, and the shoulders moving only during the brief transition between poses. Most of the dynamic motion is going on in the fertility region of the waist, belly, hips, ass, and thighs.

Models are also required to have hourglass waist-to-hip ratios (around 25-35), which reinforces their feminine fertility appeal. This eliminates a tiresome explanation about gay men dominating fashion and imposing a masculine ideal upon women, and thereby also alienating straight guy tastes. If the ideal were masculine, they would have tubular waist-hip ratios, and they wouldn't have such doll-like faces and long hair.

Even the Victoria's Secret angels, whose job does draw more attention to the chest, and who are meant to appeal more overtly to straight guys, only have a B cup size. There's just something about bustiness that does not work well with the role of modeling.

If you've been following my work on the two types of girls, you may have already guessed the answer -- butt girls are more corporeal, boob girls more cerebral. So naturally the former are favored in any role that is concrete, kinesthetic, and visual, while the latter are favored for roles that are abstract, symbolic, and verbal.

I've already demonstrated this pattern with examples from other physical domains, like athletes and dancers being butt girls, though models are not so surprising as a further example because it is a highly kinesthetic activity -- just not one that requires lots of strength, and therefore one that doesn't give them a typical shapely athletic figure, where the relatively greater size of their backside would be evident.

But don't let their tall, lithe profiles fool you -- these girls are not the awkward lanky beanpole type, they're very agile, and have fine-tuned proprioception (an awareness of where all the various parts of their body are, how they're moving with respect to each other over time, what the environment is like, and how to navigate through it). This suits them to physical activities that involve coordination more than sheer strength, but that still makes them kinesthetic people.

Just imagine how quickly they would be cast out if they could not walk to a regular rhythm, could not strut with full strides, could not time transitions between poses, could not hold a pose whose balancing demands were more complex than standing symmetrically, and so on and so forth. Of course they have to be kinesthetically gifted.

Cerebral boob girls have a different sort of feminine physicality, or rather lack thereof -- they're more clumsy and klutzy, and in need of physical protection and guidance, which the masculine role is only too eager to fulfill for them. It's cute and adorable in a childlike way, as though they were still learning how to navigate their environments and occasionally smack right into the kitchen counter. Corporeal butt girls have a more impressive, graceful physicality that shows they are done maturing and are ready to hit their stride, as it were.

These differences do not reduce to the narrow mechanics of some activity involving the lower body more than the upper body. True, you cannot strut in full strides without working your glutes, so butt girls have an advantage in achieving that kind of gait. But they're advantaged in physical activities that draw on the upper body as well -- volleyball, softball, tennis, field hockey, basketball, swimming, etc., all make intense demands on the upper body, yet those girls are all butt girls too.

Without even investigating to confirm it, I already know that archery girls are going to be butt girls, despite the much greater involvement of the upper than the lower body in that sport. That has nothing to do with large breasts getting in the way of the bow (a narrow mechanics explanation) -- rather, it's yet another example of boob girls being less coordinated and athletic. General explanations win over narrow ones.

Incidentally, one of the finalists from season 3 of Project Runway, Laura Bennett, excelled at archery after her fashion career. She, like the other designers, is pretty flat-chested. So it's not only the models, but the designers too, who are more on the butt side of the spectrum, since visualizing and constructing 3-dimensional objects that are going to be moving in various ways on a human form, requires a good kinesthetic intuition.

I'll bet the straight-guy fashion photographers are butt men, not boob men, as well, for the same reasons. Who better to consult than Patrick Demarchelier? Here's an iconic portrait of Cindy Crawford, and the cover to the book of his photography across genres: 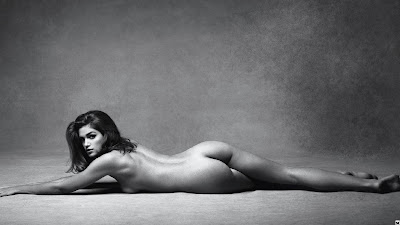 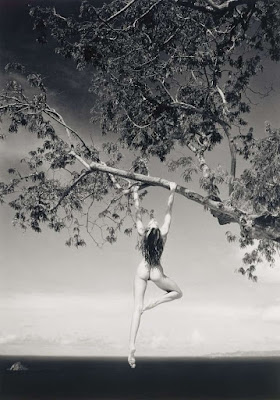 Cindy Crawford is a great example of all these things tying together. She has only a B cup chest but an hourglass figure, most of her shoots from the supermodel era focused on her hips-ass-and-thighs, she was part of the athletic / fitness trend, and in the '90s she had her own fashion show on MTV (House of Style), back when the industry was still flourishing.

However, if modeling is more about the kinesthetic performance, then African girls are going to punch far above their weight. They're more athletic in general, and specifically in sports involving the lower body like sprinting. They're also more rhythmically skilled, and a stunning runway walk requires more than just maintaining a regular rhythm -- there are distinct stages along the path, each with their own transitional poses, and when to time them and how long to hold the pauses, is difficult to pull off (see an ordinary person attempting to "do a runway walk"). In season 3 of Project Runway, this rhythmic aspect of the walk is best shown by Camilla, a Ugandan model who mainly worked with Laura.

I haven't started watching America's Next Top Model yet, but did notice from the casting that their coach for runway walking is African-American (in addition to the host Tyra Banks).

I reject the explanation that this is just elite wokeness giving quota jobs to black people for representational purposes, since this trend has been going far earlier than the explosion of wokeness during the 2010s. Also, it only extends to people of African descent -- not other recipients of wokeness' representational crusades, such as heavily Amerindian Hispanics, or any region of East Asia.

But Amerindians and East Asians are not athletically dominant over other groups, and are not stereotypically the best dancers, so it's perfectly explained by the framework that modeling is another kind of kinesthetic performance. If you're not very good at one kind, you're not good at the other kinds either. (It's not about height either: while Amerindians and East Asians are not tall on average, there's no, er, shortage of them in absolute numbers who clear 5'9, especially in gigantic populations like the Han Chinese.)

Within Europeans, there's the fascinating ubiquity of Slavs among fashion models. If wokeness were the explanation for why some groups are over-represented, then there should be zero Slavs -- wokeness is an ideology for the integration of subjects under a single sphere of influence, and for the Anglo empire, that has never included Eastern or Southern Slavs, and only very recently and tenuously the Western Slavs.

In fact, the Eastern Slavs led by Russia have been the mortal enemy of the Anglo empire and NATO. They are generally only over-represented in our culture to denigrate them (even then, they're typically played by Ukrainians, the subset of Eastern Slavs most hostile to Russia and friendly toward the Anglo empire).

Still, does it fit within the framework of corporeal vs. cerebral? Of course -- they also punch above their weight among athletes in general, but including those that are more about coordination and agility than brute strength (although they excel in those as well). Dancing, ballet, figure skating, gymnastics, track & field, and -- sure enough -- fashion modeling.

Just because those girls are slender rather than meaty, doesn't mean they're awkward waifs whose wispy forms will blow away in the wind. That's just an act, like their affected tiny little princess voices, to use their strength in a stealthy manner.

It also contradicts the misconception that Slavs belong to the "skinny and busty" type. They are certainly skinny, but they're the rare type of butt girls who are also skinny instead of thick. They may not have big butts, but they don't have big boobs either -- they're immature in development, overall. Still, they lean more toward the butt side of the spectrum, both in how much they're carrying relatively, and where they draw attention to.

Returning to the supermodel era, where was the focus on Paulina Porizkova's body? Not on her average B-cup chest, but on her round, toned, and big-for-the-'80s buns.

Zooming out, boob orientation seems to have replaced butt orientation with the rise of agriculture, sedentary societies, and civilization. And among Europeans, the Slavs were the last to settle down and civilize. I think the false impression we have of them as cerebral comes from their doom-and-gloom mood, which we associate with depressed intellectuals. But Slavs are less likely to do purely abstract philosophy, and more likely to do philosophy-through-literature or something more concrete and relatable. And again, how could a race of nerds produce so many jocks?

But the origin of boob orientation is getting too far afield, so we'll end here and maybe return to that in a later post.