Trump country is the most deeply rooted region of America

A commenter brought this map to my attention, showing the extent of settlement in America as of 1830: 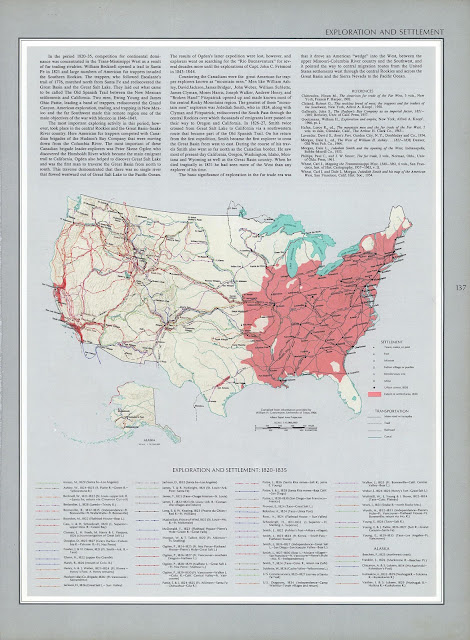 It looks an awful lot like the map of inferred Trump support from last year, and the map of states that Trump has won so far in the primary, which ties into the east-west dimension of the current political re-alignment: 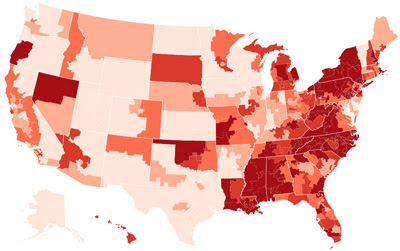 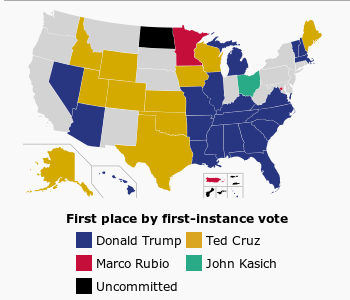 It shows why the states just west of the Mississippi River on the southern part are Trump states (Louisiana, Arkansas, Missouri), and why those farther north are not (Iowa, Minnesota, Wisconsin). More or less everywhere east of the Mississippi is Trump country, aside from Maine -- which the 1830 map shows was not settled very much back then, and so whose communities are not as rooted as the rest of New England. Ohio only went to Kasich because there was a favorite son for the non-Trump vote to rally around; Trump got the same share of the vote there as in the surrounding states that he won due to a more divided opposition.

The only real exception is Floria, which was not settled until much later but did go to Trump in a landslide.

Out West, we can see that the Bay Area and SoCal will be nice to Trump (as the Field Poll has already suggested). Arizona and Nevada (=Vegas) are by now extensions of SoCal, and they went heavily to Trump.

Since the Plains, Mountain, and Pacific Northwest regions aren't as deeply rooted, their people aren't going to resonate with "Make America Great Again," which relies on the listener feeling that something once great has been lost. But if your community's roots don't go that far back, it's hard to feel that there was a mythical long-lost Golden Age.

"Oh yah? Yah mean like when my grandparents came over from Norway in 1887? Oh gosh no, I don't wanna go back to dose days, heck no. But do I wanna live near da Mall of America? You betcha!"

Why is 1830, or thereabouts, the cutoff date? That's when the long Gilded Age began, when competitiveness and status-striving began increasing, after a decline from the founding of the nation through the Era of Good Feelings in the 1820s. If your community was founded during that initial period of getting along, pitching in for the greater good, and sacrificing some individual ambition for social harmony, that could have sent the community down a path of concern for the greater national good.

Whereas if the community was forged during an era of "I got mine, lots of luck getting yours," get-rich-quick schemes (including cattle ranching in Texas, farms in the Plains, started up overnight with large speculative loans from banks, or fur trapping and gold mining in the virgin Rockies), and minimal regulation of individual behavior (laissez-faire), that could have sent the community down a path of not really caring that much about the greater good of the nation. Not necessarily being hostile to the rest of the country, just being more insular and numb to what's going on at a national level -- let the rest of the country deal with its own problems.

Looking forward, the whole Northeast looks good for Trump, especially the two remaining Appalachian states of West Virginia and Pennsylvania. California will be his best remaining state out West. Idaho is the only Pacific NW state to predict what will happen in Oregon and Washington -- Cruz won not only the Mormon cult area of SE Idaho, but also the major city of Boise and the only metro area in the northern panhandle between eastern Washington and western Montana (Coeur d'Alene). Indiana is smack in the middle of Trump country, and has lots of delegates because it's not a sparsely and recently settled farming state (it ranks 15th by population, just behind Massachusetts and well ahead of Wisconsin, Minnesota, and Iowa).

Worst comes to worst, we have another Civil War -- but at least we'll know where to draw the borders. Were you settled before the long Gilded Age began around 1830, or did you fill up mostly from the waves of Gilded Age immigration?