Will desecration by Syrian immigrants provoke a backlash?

From a Reuters article and slideshow on asylum-seekers waiting in Serbia while trying to cross into Croatia, here's an uplifting family photo of aspiring EU citizens callously desecrating a grave in their host society (click to enlarge): 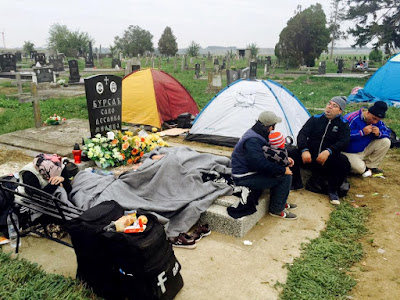 There are 7 or 8 people squatting not just in the cemetery in general, but specifically on someone's grave. Cigarette butts and other trash can be seen on the concrete, along with a pair of dirty stinky shoes, bodies sleeping right on top of the burial slab, and a couple of dudes just shooting the shit like it's all no big deal. Lord only knows where they're pissing and shitting.

The contrast could not be more stark with the stewardship of the natives who have left an orderly flower arrangement on the grave.

BTW, there's another group in the back right who are squatting on another burial slab.

(Here is a new video from Reuters of the scene at this cemetery. Although there were several thousand people, very little is shown of the area with the graves, but the group above is included. Another shot shows several shirts, etc., draped on top of a tombstone as though it were a clothesline. Such callousness, it's disgraceful.)

Such flagrant disrespect among guests should be only be met with a nice ass-whooping from their hosts. How much more disgraceful can you get than camping out on top of someone's grave?

"But it's only a minority of bad apples" -- oh, only a minority are raping babies, I guess it's no biggie that it's just a minority. Moreover, what does it say about the rest of the immigrants that they aren't stopping this? Some fraction also don't give a shit about such blatant desecration of the host culture, and the remainder who see it as an embarrassment still won't turn on their own people, no matter how shameful they're acting.

And who knows? Maybe a handful of good-natured immigrants have already tried to move these scumbags off of the cemetery, but were unable to convince or coerce them.

No matter what the reason, it all reveals the utter normlessness and anarchy that results from letting in a flood of foreigners. They no longer behave like guests in a host's home, but like a victorious army who can fuck around with the defeated people's stuff however they please.

If callous desecration continues unchecked for too much longer, it'll provoke a harsh and vengeful clean-up. The EU bureaucrats give these asylum-seekers a false sense of security by pandering to them and worshiping them. The immigrants could be in for a rude awakening when they discover that coddling bureaucrats don't run things in the small towns where they're camping out (Tovarnik, near where the photo was taken: population 2,775).

In that case, it'll be the EU bureaucrats who will have blood on their hands for inviting such wanton immigrant behavior by treating them as though they were unassailable, giving them a pass to desecrate their host societies.