Jews and the European civilizational fault-line

The last installment in this series looked at how the great civilizational fault-line in Europe affected the spread of Christianity. Basically, on the more hilly/mountainous/pastoralist side, it spread early and eagerly, while it took far longer to spread across the farmland of the Great European Plain, and was more violently resisted.

I'll get to the Reformation and the fault-line in a future post. For now it's worth taking a look at how the fault-line affected the migrations and persecutions of the Jews. Most of the big migrations of European peoples ended with the Germanic and Slavic movements of the Middle Ages. The Jews were never that huge in numbers, but they do provide a more recent case of large-scale migrations, allowing us to see if the influence of the fault-line holds even later.

Jews had settled northwestern Europe by the Middle Ages, becoming specialized in white collar professional work, generally of a financial nature (such as money-lending and tax farming). I'll be talking about the Ashkenazi Jews of northern Europe since that's who we think of when we talk about Jews in European history.

There were both push and pull factors involved in their migrations toward the end of the Middle Ages and into more modern times. The biggest push you can get is expulsion from the country. Here are some maps showing when the Jews were expelled from various parts of Europe, and where they went, up through modern times (the red-shaded map is of the Pale of Settlement): 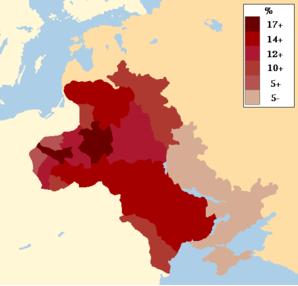 Out of all those arrows, there are basically two movements -- one toward Poland, and another toward the Ottoman Empire. The latter are the Sephardic Jews, and not who we're looking at. (They also have a small number who remained in Iberia, who went to Italy, and a contingent who settled in Amsterdam.) The bulk of the Jewish population, the Ashkenazim, were kicked out of one place after another, always moving a bit more toward the east and toward the north. Unless they were already very far east and somewhat south, like in the Ukraine, in which case they moved west and up north.

Why do the arrows tend to stop, or at least get a lot shorter, once they got into the European Plain? Why didn't they converge on Italy instead of Poland? Something about the ruling elite in the hilly/mountainous side of the fault-line made them willing to kick out the Jews, or to not find much of a point for them to stay, while the agrarian elites of the Plain were less hostile. In fact, the rulers of Poland and Lithuania welcomed them as an administrator middleman class.

I'm not sure the difference is so much between the elites in the west and east, but more among the common people who they ruled over. Like it or not, that's what the rulers have to respond to, lest they wind up on the wrong end of a revolt or regicide. Celto-Germanic people are more willing to let it be known if some outside group is not welcome. They try to give them unfriendly looks, or plain old chase them out of town, dust their hands off, and consider the job done. We don't forget a face, so don't bother trying to sneak back in.

The pastoralist way of life affords considerable mobility, just in case you felt like chasing after somebody for awhile, since your wealth is movable -- it walks on four legs. You can also leave your wealth alone by itself for awhile as you spend the day making outsiders feel unwelcome. You do have to worry about raiders and predators if you left your livestock unattended, but you wouldn't have to worry about it being able to tend to itself otherwise -- the sheep are perfectly capable of grazing on pasture without you there. Just hand them over to one of your kinsman to watch for the day.

Balto-Slavic people favor bottling up their emotions and opinions instead, and generally not being confrontational in personal affairs. Agricultural life is all about keeping your nose to the grindstone, so there's no time to make waves. Your land and crops need laborious tending to most of the day, day-in and day-out. If you wanted to set those chores aside and physically leave your plot of land to go chase off some unwelcome group -- someone else might be squatting on or taking over your land when you get back after a week, or your plants may be suffering from neglect because you couldn't bring them along with you, nor find someone to "plant-sit" for you because they would have their own plot of crops to laboriously slave over.

You need to hover over crops in a way that you do not need to for livestock, because you're not spoon-feeding the animals, or washing them or what have you, on an individual basis. You're mostly standing guard to ensure the safety of the collective flock. And one shepherd could stand guard for 1, 10, or 100 sheep. The more one-on-one tasks are relegated to women and boys, such as milking. The farmer's need to hover severely limits his ability to do as he pleases and pursue other projects should the fancy strike.

In short, then, I think the rulers of hilly/mountain country sensed that having a foreign ethnic group administer the peasants as a middleman group would have provoked their rowdiness. Can't even collect the taxes yourself, or send one of your own to do it, eh? You had to send some foreign group who feels nothing but contempt for us to suck our blood on your behalf, did you? Sensing the potential for rowdiness among their commoners, the Celto-Germanic rulers figured it was better to administer their realm by themselves, as much as possible.

The Balto-Slavic rulers figured, meh, these hardscrabble peasants wouldn't upset their monotonous lives just to chase off the Jewish tax farmers. That's good for our security, since the peasants won't associate losing money with us, but with the Jews. They'll either bear the humiliation of having a cold foreigner group take their money, or they might not even mind who takes it -- we ought to just keep our nose the the grindstone, don't cause a scene. Somebody's always going to be ripping you off, does it really matter if it's Jews or Poles? No time to worry about that -- back to sowing seeds.

These two opposite ways of dealing with their personal frustrations toward Jewish money-lenders and tax farmers led to drastic differences in how they sought to deal with The Jewish Problem as a group. On the Celto-Germanic side of the fault-line, they treated Jews like an acute infection -- a pesky group who needed to be sneezed out, and that would be that. Don't obsess about them afterward. There was very little virulent, bitter, enduring anti-Semitism in hilly/mountain country, and no feeling that the Jews needed to be hounded even when they'd left your territory, let alone tortured or killed en masse. Just kick them out and don't let them back in -- we know who you are and what you look like, and we'll be ready for you if you try to come back. Sounds pretty simple, doesn't it? Like a healthy, normally functioning immune system.

Well, that assumes that you have a certain comfort with standing your ground, which pure farmers do not. The phrase "long-suffering" comes to mind. For them, the feeling slowly and slowly builds that the Jews are a bloodsucking foreign race, and if we could only get rid of them, we'd finally be able to breathe free. But we're tied to the land, and they aren't -- they're white collar professionals and can roam to whatever group of nobles will pay for their services. So what's to keep them from just coming back to suck our blood again even if we did manage to chase them out of town in the first place? I guess we'll have to really hit them hard so they don't ever feel like coming back. The longer they bottle it up, the more cataclysmic the explosion when it finally gives.

Now the immune system has switched over from run-of-the-mill expulsions and beatings, to the more aggressive all-guns-a-blazin' kind of immune response -- the kind that could go haywire and cause septic shock if it's not careful.

And sure enough, the Plain of Europe was the main stage for the history of pogroms. Sporadic mass violence against Jews was not unattested in the hilly/mountain side of Europe, especially in the Rhineland where a sizable Jewish population had remained uncharacteristically west/south of the Plain. But it was more like an occasional chasing-out than a momentous rising-up-against. In the Plain, it was more bitter, long-lasting, and took the character of an apocalyptic mass revolt against their oppressors, more or less from the 17th C. through the 20th. Knock them off their pedastal for good.

The greatest enthusiasm for the Holocaust was not surprisingly throughout the Plain, including the Baltic and north/east Germany / Prussia. Western and southern Germans were not very eager for the Nazis to rise to power, and were the main base of opposition -- another reflection of the great fault-line. Here's a map showing the percentage of each region's Jewish population that was killed in the Holocaust: So far these are all influences of the fault-line on the host populations in their treatment of Jews. What about the inclinations of the Jews themselves? Again, when they were kicked out of England and Germany, why didn't they head gradually toward Italy and the Balkans? Why didn't they find Serbia as attractive as Poland? Both are "Slavic" nations, after all. But one is mountainous and pastoralist, while the other is on the Plain and agrarian.

If they sought to continue their unusual levels of wealth as financial middlemen and administrators, they had better seek out a large, sprawling, rigidly hierarchical economy. And you tend not to find those in hilly/mountain country. It's more likely to be located in the large-scale farming systems of the fertile Plain.

Also, middlemen minorities would prize protection from mob violence and retaliation as a job perk from their employers. That assumes more of an elite monopoly on violence, and that degree of concentration of power tends to be found in more hierarchical agricultural societies. Central authorities are more impotent in hilly/mountain areas where the masses herd livestock and are more mobile during the year.

Just imagine how Jews would feel settling backwoods Kentucky as tax farmers. Now you know why they flock to massive-scale, hierarchical cities like New York instead. There, they'll have a leader with concentrated power, whether Gentile like Giuliani or one of their own like Bloomberg, who can more or less suppress group-against-group feuding, even if it takes awhile like suppressing the mafia and later black gang warfare. Opportunistic, individual crime may still occur, but that's a risk everywhere -- what the middleman minority is really sweating about is that an entire group might band together as a mob and advance on their community in its entirety.

These various push-and-pull factors, operating on both the host and Jewish societies, seem to be most easily explainable as consequences of the fault-line between hilly/mountain country and the Great Plain in Europe. Lots of ink has been spilled over the topic of European Jewish history, but shockingly little of it has drawn attention to the differences between (agro-)pastoralism and sedentary agararian farming that have conspired to lead history on the course that it has taken.