Listening to any compilation of '80s hits, you're struck by the breadth of the performers. It's possible but uncommon to see the same group take up a lot of space, whereas lately it seems like there are only a few acts who dominate.

Because each group tends to have a somewhat unique style, that translates into stylistic variety as well -- hits of the '80s included smooth jazz, blues rock, R&B, rap, folk, world, new age, new wave, synth / dance / disco pop, and a million types of rock-influenced music. Now there are only a handful of distinct sound styles -- awkward singer-songwriters; girl you so fine / uh-huh I know I'm so fine R&B; hip-hop for retards; and bombastic minimalism (Katy Perry, Kesha, etc.).

How can we quantify these changes? There are a couple ways at least. In this post I'll look at how many artists are represented among those who scored a #1 hit on the Billboard charts within a given year. At one extreme, there could be nearly 50 different groups in a year, a new one every week. At the other, there's only one group, regardless of how many songs they put out.

Here are the lists of #1 hits. I start with the first full year and go through the last, 1941 to 2012. See the footnote for boring methodology remarks.* Here is the graph: 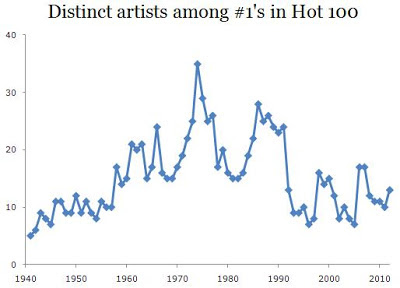 Several interesting things pop out. First, indeed there was a lot more variety back in the good old days than in the past 20 years. However, that doesn't go back into the old, old days -- in fact, we've returned to mid-century levels of homogeneity in pop music.

Variety levels were low and hardly changed from the early '40s through the mid-'50s. The somewhat lower level then compared to the late '50s and after may have to do with the slightly different chart methods used, though not by much, judging from years when both the best-sellers and the Top / Hot 100 allow comparisons. What is clear is that the variety levels weren't rising or falling during those early years -- they're all judged by the same chart method then. Variety was bottoming out during the mid-century.

I wouldn't make much of the huge spike in 1974 alone; when you smooth the data, the mid-'70s peak and the later '80s peak are about the same. The key swing upward began in the late '50s / early '60s, crested in the late '80s / early '90s, and fell off a cliff during the single year of 1992. This of course tracks the rising-crime vs. falling-crime pattern, for reasons I've partially discussed elsewhere and won't get sidetracked with here.

Second, there are shorter cycles on top of the larger rise-and-fall. They differ in spacing, but are roughly 10 years apart, peak from peak. This is closer to the standard fashion cycle / psychological habituation story, where we crave more and more variety until it's information overload, then we swing back toward less and less variety, which gets too boring, repeating the cycle all over again.

I don't buy the habituation explanation because it seems like we shouldn't move for roughly 6 years in one direction, then 6 years in another. Does it really take that long to get tired of the trend toward, or away from, variety? Whatever the mechanism is, though, there is a shorter-term cycle in taste for variety.

Third and finally, what appears to be the optimal level of variety? Well, we'll just apply the trusty rule-of-thumb and look at the years 1983 and '84, the two greatest in the history of popular music since the early 1930s. They had 16 and 19 artists, respectively, or roughly 1 new chart-topping artist every 3 weeks. The extreme churning of the mid-'70s seems a little too dizzying: in 1974 there were 35 artists in all, or a new #1 group every 1.5 weeks. That makes hit songs harder to grab onto and enjoy their popularity for awhile before ditching them and moving on to something else. That may explain why people who were tuning in at the time don't remember a whole lot of the music (aside from drugs).

The low points during the mid-century and Millennial periods had about 7 or 8 artists total, meaning you'd have to wait about 7 weeks for the next big group to arrive. That's a bit too risk-averse, holding on so long more out of insecurity, comfort, and familiarity than because it still sounds so cool after nearly 2 months at #1. Kids these days sure do have long attention spans -- regular 4-hour library sessions, 3-hour movies, 60-hour video games... ("Not gonna lie bro, it's boring as shit for the first 30 hours, but after that it gets effin' epic.")

Does iTunes give similar statistics for how often you play songs by a certain artist over a given time period? I've never used it, but you could repeat this approach for recent years, or however long it saves your usage data. I'm guessing most mp3 listeners take nearly 2 months before their most-played artist is replaced by another. This is separate from what the Billboard charts show, which is all new music. I mean even if a college kid listens to somewhat older music, their mindset and preferences are probably still in the "stick with it too long" direction.

I don't know about my own rhythm, though a new main artist every 3 or 4 weeks sounds about right. It was Howard Jones for about a month, and I've been on a Human League kick for several weeks now.

At the further, spastic extreme, you find those music blog dorks who never get attached to anything, and are burning through new groups just cuz. "I'm honestly so over Miniature Portraits of Proust's Cat. I mean, I played the hell out of them for like 20 minutes this morning, but sometimes you just have to know when to say when, y'know?"