Earlier I looked at how prevalent certain themes and images were in the titles of #1 songs on the Billboard Hot 100, from 1959 through 2010 (search this blog for Billboard to see them all). For the most part, the evocativeness of hit song titles reflected the violence rate -- rising throughout the '60s and '70s, and reaching a peak sometime in the later half of the '80s, then declining or disappearing altogether from the mid-'90s onward.

Now let's take a look at the lyrics instead of just the titles. I chose 1987 and 2010 to compare peak and trough. See the footnote for detail on the methods. [1] Here are the word clouds showing the most frequent words across all #1 songs for each year (click to enlarge): 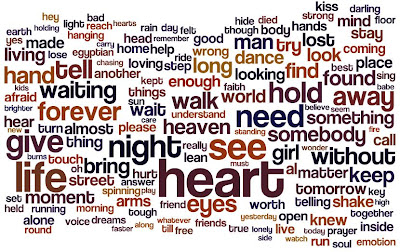 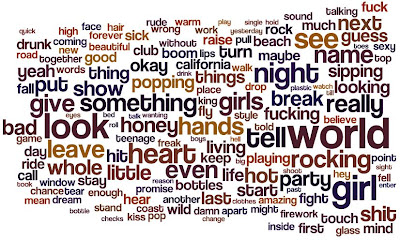 Based on the earlier studies of song titles, these aren't too shocking. The hit songs of 1987 had more concrete images -- eyes, shake, dance, run, chasing, spinning, burns, voice, body. They focused more on matters above a mundane level or refer to the passage of time -- heaven, faith, prayer, soul, forever, life, died. Natural and organic pictures abound, too -- earth, light, brighter, rain, sun. And our need to socialize comes through, especially in ways that are egalitarian and based on trust -- home, help, care, find/found, understand, friend(s), need, somebody, hold(ing) -- and how unnatural and therefore uneasy we feel hiding in a tiny social bubble -- waiting, alone, lonely.

In contrast, by 2010 the hit songs had more bland images -- looking, sipping, talking, playing, something. They focus only on here-and-now materialism -- popping bottles (i.e. breaking open expensive booze), sexy, plastic, ride (as in, showing off your car), hot, party, style, club, clothes. Nature bores them, except for the beach. And far from wanting to socialize on equal terms and enjoy themselves, today's audiences want to hear songs about self-aggrandizing attention whores who you only, like, wish you were as cool as. That doesn't come across very well in the word cloud, but that is the context for all of that bling-bling imagery. And in line with the pervasive trying-too-hard vulgarity, they have mainstreamed curse words -- fuck(ing), hell, damn, shit.

The 1980s were the opposite of the materialistic, artificial, and selfish "greed is good" picture that most people have in their heads. There were a very small minority who could've starred in Less Than Zero, or who resembled the caricature that Alex P. Keaton had been made into by the later seasons of Family Ties. Like a small dose of a pathogen introduced into the social superorganism, that fringe had the effect of triggering the moral and behavioral immune system of the larger majority -- now we see very clearly how not to live, how we should treat each other, and why.

This process had been underway since the '60s and '70s, when rising violence rates caused this greater variation in behavior, through mechanisms I've detailed elsewhere. Once the change in violence rates reversed, so did the other social changes that were influenced by them. Lacking any detectable major threats to their security and social relations, their moral immune systems have mostly failed to switch on.

An amoral people, such as the Chinese today or Americans in the later 1930s through the '50s, can still do OK if they have strong traditions that make up for their underdeveloped moral sense. Still, relying too much on traditions is like relying too much on antibiotics while letting one's own immune system languish -- what if the recipes or productive technologies for the antibiotics are lost or blocked or otherwise inaccessible? What if there's a new germ that the existing range of antibiotics can't deal with? Then the health of the individual and society can really start to careen toward the cemetery, and it only takes one Black Swan to wipe out the group. (This is when we really reap the benefits of trial-and-error learning, especially through social learning -- what did someone else do that did or did not work?)

Indeed, by 2010 the pimp-my-ride mindset had become so epidemic that even when we were years into a major recession, the #1 hit songs were still bragging about how great of a baller lifestyle the singers lead, and what a chump you are if you aren't poppin' bottles of Moet and Crystal. Back in the '80s the average listener would've recognized these sucker MC's for what they were -- a bunch of ghetto and trailer-park trash hootin' and hollerin' like they'd just won the lottery, rather than someone who'd achieved their fame and wealth through talent and excellence.

Such a reaction would not have been due so much to strong traditions -- somewhat -- but more to the recent boost to their own internal moral immune systems that they got from witnessing a rise in disorder. Like exposure to a pathogen, too much will overwhelm the body, but again it's not as though sociopaths and materialistic people were trampling over the majority. We have to learn to accept and even appreciate a slight but not dramatic rise in the violence rate, or else we'd be doomed to wander off the path even farther in our existential drift.

[1] Each year's long stretch of text included the song title, and a pared down version of the lyrics. I only put in the chorus once, and trimmed away other repetitious parts. Otherwise, if a single song keeps repeating a line, the picture for the whole year will make it look like a whole bunch of songs mentioned some keyword.

I had the frequency-counting program cut out very common words ("and", "to", etc.), and I removed others that perhaps are not super-common but still ordinary enough ("around", "make"), and that did not bring up some key theme (e.g., "always" and "tonight", which in context almost never treat the passing of time). I also took out slang addresses like "baby" and "boy".

Most importantly, I cut out "love," which does actually say something about what topics people heard songs about, but which so dominates all the other words that the word cloud is distorted by its imposing presence. And it's the least surprising result, so it's no big deal to mention it here and keep it out of the pictures. It's worth noting, though, that "love" was less dominant in 2010 than in 1987.