One function of clothes is to serve as markers for ethnic groups, broadly construed -- not just Mexicans vs. WASPs, but also emos vs. jocks. When the social world is most chaotic, there is no time to figure out who belongs to what group -- you have to be able to tell right away, both to find other members of your group, and to warn members of other groups that they shouldn't approach you.

Abercrombie & Fitch created the younger-oriented Hollister because they found out that college kids were turned off by all the logos at A&F, which were there to attract teenagers. Hollister then would emblazon logos all over their stuff and draw the teenage customers into their own store, leaving the college kids to breathe free at A&F with no more high schoolers hanging around.

The teenagers' greater hunger for logos follows from their greater obsession with easily identifying members of different groups. College kids' social world isn't quite as crazy, so they're not as hot about logos. And full adults, whose social lives have pretty much settled down, would think it tacky to wear a logo shirt. This also extends to broadcasting your musical tastes through clothing: middle and high school kids love t-shirts with the name or graphic of their favorite bands, while college kids try to dress less like groupies and more like the performers, and full adults don't bother at all to signal their musical tastes through clothing.

On the surface, then, adults would seem to dress better -- no logos, no annoying statements about what music you listen to, etc. But this all stems from adults not being as in touch with the rapid pace of fashion -- they are slower to recover after being infected by a passing fad. And this weaker strength of their social immune system can itself wreck the adult's appearance for a much longer time, compared to the resilient youngster.

Even though teenagers have long abandoned them, I'll bet you still see the occasional woman over 25 (and I've seen some over 55) who still wears low-rise jeans and a belly-baring top that she's constantly pulling down in the back. Search this blog for "thong" to see the sales data showing that since roughly 2004, that whole low-rise jeans, thong underwear, exposed mid-riff look has been dying or dead.

Maybe a picture will help. Here's one from an NYT article on teens cutting their shopping budgets during the recession (click to enlarge): 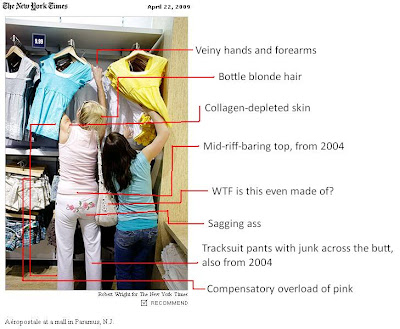 It's hard to tell how old the woman on the left is, since we can't see much of her body, but I'd guess she's at least in her late 20s, possibly in her 30s or even 50s. Her physical signals aren't really what made me notice (except for the veiny hands) -- it was the pink tracksuit pants with a graphic on the butt. No self-respecting teenager has worn those for at least four or five years -- a lifetime in adolescent years.

The girl next to her is obviously a lot younger, probably 14 or a skinny-for-her-age 15 year-old. Note the lack of overly processed hair, the glowing skin, and absence of veins. But the real giveaway, even if you couldn't see any of the rest of her, is the double-layer tops -- one long enough to entirely cover her lower back / upper ass area, and another one to contrast with that. If, like the woman to her left, she went to school in an outfit that was trying to keep the skanky look of 2004 alive, she'd get laughed at by everyone all day -- and her embarrassed friends would be the first to pillory her, just to distance themselves from the freak.

The younger girl's modest look may catch on among older women, and they might dress that way long after it's cool, but then returning to normal adult clothing wouldn't be so great of a change. It's when older women get infected by the more provocative clothing of young girls that things really turn to shit. Then they not only embarrass themselves like the mom from Mean Girls, while the trend is still hot, but they prolong their pitiableness by hanging on to it for years after it's done.

Once I'm elected dictator, I will mandate modest uniforms for all females over 25, for their own good. Only healthy young girls with social immune systems that are quick to recover will be allowed to horse around in the playpen of fashion.