In memoriam Sixteen Volts, hounded into auto-CtrlAltDeletion by The Woman (or maybe not; we still can't tell). One good thing about having a more nutty, less-socialized personality is that they can't easily reboot your mind.

Peter has discussed before the woman shortage in various comment boxes that I frequent. The gist is that, from looking at how many men vs women belong to online dating websites such as Match or E-Harmony, there are more men than women, giving women the upper hand. But how can that be in a metropolis, which attracts disproportionately more women and gay men than straight men? Peter's idea is that serial monogamy is really de facto polygyny -- those supposedly monogamous guys are having affairs and whatnot on the side, taking their mistresses off the dating market. Collectively, then, the alpha-males -- let's say the top 25% of the desirability distribution -- all but monopolize the pool of females.

I don't doubt that alphas play around whenever possible, and that this takes some women off the market, but I think a stronger phenomenon occurs under serial monogamy -- that is, even if a would-be mistress doesn't indulge the alpha in his polygynistic fantasies, the unspoken-for females might still be enamored of him (or another alpha), preventing them from accepting offers from sub-alphas. Their reasoning isn't so screwy -- they know that under serial monogamy, it's only a matter of time before he dumps her, so she may as well wait eagerly, securing a "first in line" spot. Hell, she may even try to orchestrate the dissolution of his current relationship using subtle or gross methods. This aspect of serial monogamy has the same result on availability of females as polygyny has -- namely, they're almost all spoken for physically or mentally, thus producing a shortage of women interested in what a sub-alpha has to offer. And yet it doesn't engender the animosity in sub-alphas that polygyny does, as the monopolization is not overt, given that the additional females whom the alpha keeps off the market are only enthralled and waiting their turn, not actually living or mating with him. This is illustrated below: green boxes represent a person from the top 25% of the desirability distribution, the facial expressions are self-evident, and solid and dashed lines indicate "is comitted to" vs "is yearning or pining for" relationships, respectively. 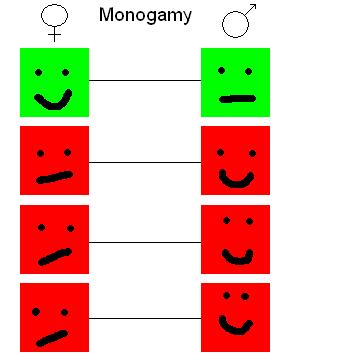 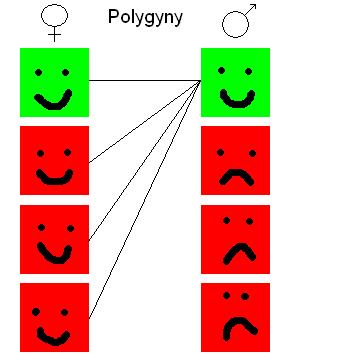 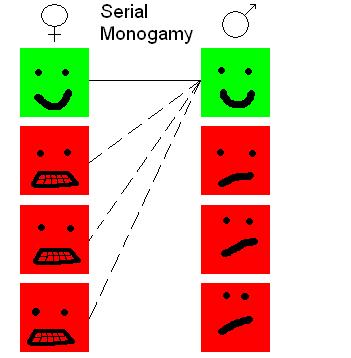 This aspect of serial monogamy produces another curious result -- females must constantly compete against each other, not simply to land an alpha, but to keep him even while in a "committed" relationship (he's committed to leaving her once something better comes along or he grows bored of her). Under monogamy, they compete to snag the alpha but afterwards must settle, grin, and bear it if they lost. Under polygyny, only a bottom-of-the-barrel female won't be snatched up by some alpha or another, so competition isn't as fierce either. Yet under serial monogamy, the struggle is unceasing, and this frustration is compounded by the carrot-and-stick nature of a female's prospects -- sure, she could settle for a sub-alpha while she waits her turn to be the alpha's girl du jour, but she's equally sure that the alpha is this close to dumping that bitch of a girlfriend who's been hogging him for so long already, and that even if not, she'll get to work on sabotaging their relationship.

And though thoroughly perplexed by the lack of available women despite the absence of overt or stealthy polygyny, the sub-alphas do seem to realize that this is reality nevertheless, and so end up quitting the relationship game by throwing their hands up in confusion: "Girls!" They start hanging out only with guys and caring only about guy things -- video or computer games into their 20s and 30s, extreme sports, cars, whatever -- the devil if it alienates them even further from females. This is who SpikeTV is geared to -- it hosts manly car mechanic shows, as well as the geeky Video Game Awards, and of course the only focus on women is during a countdown of the 100 Hottest Babes. Hey, if your chances of marrying are slim, you might as well fantasize about the best available rather than develop some silly crush on a co-worker, who's likely pining away for someone taller and richer than you. These are thus the guys who drive the multi-billion-dollar-a-year porn industry in the US. The ones with more antagonistic personalities grow mildly misogynistic, while the more nurturing personalities wallow in shame believing that they haven't properly raised the child of their relationship prospects.

Some will say I'm painting such an awful picture of things so that we'll all decide to go monogamous -- conveniently enough for me, a delta-male. The alphas wouldn't like having their dick fenced in, and though the most desirable females probably wouldn't mind (since they'll snag the best no matter what), the sub-super-hot females would resent abandoning the opportunity to be the Miss Alpha for at least a little awhile to cash in on being Miss Nobody forever. I'm actually not urging legislation or a popular movement or what-have-you to return to strict monogamy, even though I believe that's optimal, as it doesn't bode well for social cohesion to have a growing sub-population of not just unattached but drop-out males. And while still acknowledging every woman's right to choose which mating strategy she'll employ, I look at the frustration etched onto their faces as they try to compete with would-be usurpers 10 or 20 years younger by purchasing $175 butt-resculpting jeans, and think: "You got what you asked for."