Psychometrics & evolutionary aesthetics: the beautiful and the sublime

Denis Dutton's evolutionary aesthetics, which infuses evo bio into aesthetics, is a welcome start toward kidnapping another philosophical field from the hallowed halls of the humanities and raising it in the clinical laboratory of social & bio science. I critiqued his particular model here. I'm now going to elaborate a useful construct -- it's not that clever, but it clears things up, and it allows us to discuss both universal tendencies alongside group and individual differences. First, let's look at a graph and then inspect the parts: 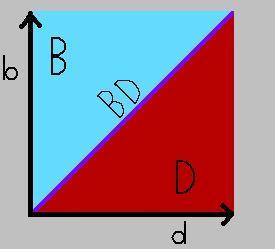 The graph shows two orthogonal vectors, d (danger) and b (beauty). The magnitude of the danger component is determined by how intuitively dangerous the object appears to the human mind -- for example, a still pool would score lower than a turbulent rapid. This roughly corresponds to the older term sublime but is more transparent for integration with evo bio. The magnitude of the beauty component is determined by how intuitively pleasant the object is to the human mind -- for example, other things equal, a human face with clear skin is more beautiful than one maculated with acne.

For now we leave aside why and how the human mind has been designed to perceive some objects as more pleasant or dangerous than others. We assume natural selection has adapted the mind to find things more pleasant (or dangerous) the more they further (or hinder) survival and reproduction, though we treat these two vectors as orthogonal since they needn't a priori overlap. Moreover, if we only used a single axis like the number line, an object composed of equal parts beauty (positive) and danger (negative) would result in 0, with no hint of the magnitude of the components. If we use two axes, however, when the two components are equal, in general they won't yield the same result as another equal-component case would, since the magnitude of the components needn't be the same across the two cases.

Components for both beauty and danger result in a vector a (for aesthetic quality), which is what interests us. Now, if we draw a line 45 degrees between d and b, this will partition the space into three equivalence classes: B (the beautiful), where for all a in it |b component| > |d component|; D (the dangerous), where |d component| > |b component|; and BD (the beautifully dangerous), where |b component| = |d component|. By assumption, each vector a itself represents an equivalence class, namely the set of all objects whose components for beauty and danger are those of a (we return to how to investigate this assumption later). For example, a vector with a b component = 7 and d component = 1 might represent the set containing, among other things, a rainbow, a flower in bloom, a baby's smiling face, etc. A vector with these scores reversed might represent the set containing, among other things, an impending tornado, a punisher winding up to lash you, a precipice that leads a mile straight down, etc.

Because we're measuring intuitive reactions, they could be easily quantified: just come up with lots of items and ask a large random sample of people to rate each item for how dangerous and beautiful it appears (1 for not at all, 10 for very much so), and then average the results. The only drawback is that in order to place a new item on the graph, you'd have to repeat this laborious procedure, though if you were only concerned with grosser details you could ask 20 people whether it was more or less dangerous and more or less beautiful, allowing you to place it in one of four quadrants. Or you could ask whether it was more dangerous than beautiful, more beautiful than dangerous, or about the same for both, allowing you to place it in either B, D, or BD.

We assume that on the whole humans prefer to experience objects whose aesthetic quality a lies in B rather than D, since a preference for impending tornados would be very difficult to pass on to future generations. Because the highest known mutation rates in humans are on the order of 10^-4, we take this as the upper-bound for how many people might have such preferences in a population -- say, coprophiliacs. Any higher proportion would suggest either that the preference confers protection against disease -- which in this case is close to unimaginable -- or that it results from infection, e.g. by a fecal-to-oral germ which compeled the host to habitually ingest a substance likely to contain germs closely related to the original germ, perhaps a form of kin selection (since such a germ would not be easily transmissible to other human hosts).

As an aside, the set BD is what others would simply call "thrilling" -- one feels both fearful and joyful in equal measure. Some examples are tickling, which consists of roughly equal measures of an attack on one's vulnerable areas and affectionate play that cements an intimate social bond. This vector would not be distanced very far from the origin. One that would be further distanced is riding a rollercoaster. Returning to sexual matters, a face like that of Angelina Jolie (compared to, say, Natalie Portman) would lie on the BD line, since it incorporates an above-average degree of masculinity for a female face, as well as giving off a predatory expression. Like tickling, but much further distanced still: BDSM.

Hopefully this distinction will clear up some of the confusion that can cause reasonable people to talk past each other, e.g., when someone claims that fair hair is more "attractive" than dark hair, or that missionary sex is not as "hot" as role-playing. By breaking such things into (at least) the two components of beauty and danger, we can make better sense of how the two items compare.

Looking forward, we have assumed that each vector represents an equivalence class, so if one prefers Angelina Jolie to Natalie Portman, they will (in more cases than not) also prefer kinkier to more vanilla sex. This would follow if there were a general factor for aesthetic preference, like psychometric g, which is domain-general. Just as people who score highly on one cognitive test tend to score highly on all others, thrill-preferring people are assumed to prefer the thrilling in all domains. However, unlike g in intelligence, our purported aesthetic g does not have a century of solid empirical support. This is understandable, since psychometricians aren't very interested in aesthetics, and presumably the tests are more difficult to devise than IQ tests.

Still, here's an outline for research. Basically, we would choose a large random sample of people and administer questionairres that focused on widely divergent domains: e.g., sexual acts, physical attraction, musical styles, natural phenomena (whirlpools, flowers, etc.), visual art / design styles, hobbies, and so on. Each question would require the person to choose 1 of, say, 9 options as their most preferred type -- one option for various regions of the beauty-danger graph. The hypothesis would be that all of the correlations between any two domains would be positive, just as all correlations on subscores for IQ tests are positive. The correlation matrix could then be factor analyzed to see if there were only one general factor, as well as second-order factors similar to "verbal IQ," "spatial IQ," and so on, in IQ tests.

After a reliable model had been developed, we could run the standard tests for heritability using the behavior geneticists' paradigm of twin and adoption studies. Using fMRI (including on pathologicals like coprophiliacs), we could discover what is different in the brains of people with contrasting aesthetic preferences. Administering the tests to diverse populations, we could see whether or not there were any remarkable group differences; and if so, why, taking into account their history. We could also look for quantitative trait loci involved in aesthetic preference. These tools are already firmly established, so assuming we devised a reliable aesthetic preference test, we could quickly investigate these larger questions -- contrast this with the case of IQ, where researchers had to wait many decades after the initial psychometric success in order to study heritability, brain correlates, and candidate genes. All that is wanting is a group of aesthetically minded psychometricians. Calling Dean Simonton?