After watching the Bond movies, where I saw Teri Hatcher play a brief role in Tomorrow Never Dies, I figured I'd move on to Desperate Housewives in order to re-familiarize myself with the zeitgeist of the late 2000s, since we're entering another restless warm-up phase of the excitement cycle. I'll write about that show later, as part of a larger look at the late 2000s.

But for now, I'll just note that she's 1/4 Syrian through her mother, whose maiden name is Beshur. (In her looks, she's more than just 1/4.) Googling didn't turn up much about the surname; the only hint is that it's connected to the Tartus region of Syria, right on the Mediterranean Sea, where the Alawites are the majority and Christians a decent minority. I'm guessing those roots are not Muslim, but either Christian or crypto-Christian.

She always had a dark exotic look, especially those half-moon eyelids. But without an exotic surname to match, it made her blend in more with the mainstream ethnicities. If she went by Teri Beshur, it would have all made sense from the beginning. 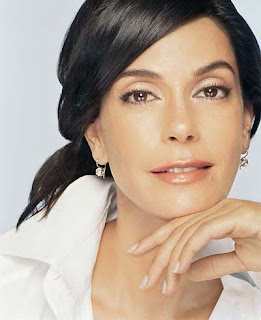 It's a good reminder that when we're evaluating someone's ethnicity, it's not just racial / genetic / biological traits that our intuition is paying attention to, but other social / cultural markers like names.

For instance, how exotic would Kim Kardashian strike us if she were known as Kim Houghton, her mother's maiden name? But slap an Armenian surname on her, and suddenly we're nodding along about how exotic she looks.

It's not so different from the person deliberately altering their surname in order to disguise their background and appear more mainstream.

Since the pressures toward assimilating are far greater than standing out, I wonder if that's something that women with exotic surnames are looking for in a husband -- the chance to give their kids a mainstream surname and help them fit in socially and culturally, despite mommy's exotic genetic background. If it were an exotic man looking for a mainstream wife, he wouldn't get that social-cultural bonus -- his kids would continue to have his exotic surname.

That predicts that inter-cultural marriage should be biased towards exotic wife and mainstream husband, rather than mainstream wife and exotic husband. And generally, that's how it goes -- when choice is involved, at any rate. Certainly an exotic husband could be part of a foreign invasion that is raping and pillaging its way through a conquered people.

It further predicts that, even controlling for degree of exoticness, a woman will feel greater pressure to assimilate by marrying a mainstream husband if her surname reveals her exotic background. Take two half-Syrian / half-Anglo women, one whose Syrian side is paternal and another whose Syrian side is maternal. The one with the paternal Syrian background should be more eager to marry a mainstream husband -- like Teri Hatcher's mother did.

As a side benefit, the exotic woman also gets to take the mainstream surname of her husband and fit in more herself, although there's still the record of her maiden name "out there" to be discovered. With her children, though, they've got mainstream surnames from birth.

Just something to keep in mind for the guys who prefer exotitude in their babes. Make sure it shows up in her surname as well, and she'll be more willing to pair up with you (assuming you're mainstream yourself). If she's exotic through her mother only, it won't show up in her surname, and she won't be as eager to bag a mainstream guy for a husband.