Female athletes to make comeback as hot girl type during restless phase, and athletes are butt women not boob women

Out of nowhere YouTube started pressuring me to watch clips of women's track & field events that showcased the ass-and-thighs of the athletes. OK, you got me.

Aside from looking nice physically, they're decently entertaining to watch -- not long and boring, no complicated rules, and minimal equipment. Just a brief burst of display of overall athleticism and coordination. Not so different from watching dancers, just leaning more toward the athletic than the coordination side.

First impression: 100% of athletes are butt women rather than boob women, confirming yet again that corporeal people are ass people rather than boob people (who are cerebral). It has nothing to do with having low body fat -- there are plenty of women who are skinny and busty. Fitness does not melt away breast tissue. And there are plenty of women with a normal or chubby level of body fat who carry more of it in the back than in the front. It's the kinesthetic orientation itself that is tied to being a butt woman rather than a boob woman.

As for above the neck, the relay sprinters have the prettiest faces. Perhaps because this is not a championship sport, it lets in less tomboy-ish women who don't have to make the sport the main focus of their lives.

Then I wondered why YouTube was pushing this type now. Athletes haven't been a hot girl type for awhile in pop culture. In fact, throughout the vulnerable phase of the excitement cycle, from 2015-'19, the most resonant portrayal of them was as sexual assault victims, i.e. the US gymnastic sex abuse scandal. Far from being confined to the sports world, one of those victims (Aly Raisman) was featured in "Me Too: the Music Video," AKA "Girls Like You" by Maroon 5, one of the mega-hits of that emo phase.

It seems like not too long ago, female athletes could become instant sex symbols, like this 2012 viral video of Australian hurdler Michelle Jenneke doing her bouncy warm-up dance:

But then that was the manic phase of the excitement cycle, 2010-'14, before energy levels crashed into a refractory phase and everyone went emo. There was nothing incompatible, though, about sexy athletes and a zeitgeist marked by soaring energy levels.

There was even greater popular horniness over athletes during the restless warm-up phase just before, during the late 2000s. Consulting the first list I could find of most attractive female athletes, I narrowed it to only those I have actually heard of. (I'm not a sports fan, so if I don't know them, they were not a pop-culture-wide phenomenon.) From 2005-'09, there was Danica Patrick, Maria Sharapova, and Gina Carano (during the original MMA craze).

Left off of that list because she was only a 17 year-old high schooler at the time, is the most pined-after athlete of the late 2000s, Allison Stokke from California. All those little men trying to pole-vault up into her eyes... 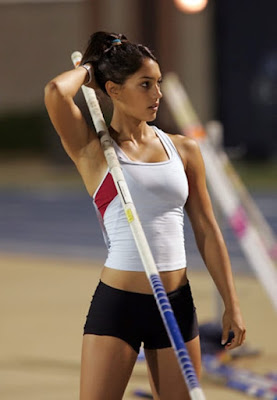 From the vulnerable phase of the early 2000s, there's no one I recognized, although Anna Kournikova was a sex symbol during both the late '90s and early 2000s. But no one who became a hit sensation during 2000-'04. The parallels with 2015-'19 are striking.

There were plenty of them before then, however, beginning in the restless warm-up phase of the early '90s and lasting into the late '90s manic phase (when Kournikova first broke out). The most memorable was beach volleyball player Gabrielle Reece, who became a model and host of a show on MTV. At the same time, swimmer Summer Sanders during the 1992 Olympics was singled out for her pretty looks, and by the late '90s was the face of VO5 in TV commercials.

And who can forget the 1994 episode of Seinfeld that revolves around lusting after and dating a former Olympic gymnast? Or the fact that in that same year tabloid newspapers and TV shows, as well as Penthouse, made a sex symbol out of figure skater Tonya Harding by publishing images from a sex tape of hers? Gross if you ask me, but it resonated widely enough to be sought after by the media. In 1999, soccer player Brandi Chastain became famous for tearing off her shirt to reveal her sports bra after winning the Women's World Cup.

I can't find any major examples from before the '90s -- women's sports were just not a big thing, and the handful of athletes who were widely known were not also babes, let alone cultural icons of beauty.

Still, that leaves two full cycles' worth of history, and it does look like athletes lose their sex symbol status during the vulnerable phase. People's energy levels are so negative, the guys can't imagine being with a woman who they assume would be too full of energy in bed, and the girls can't imagine wanting to be the type of sex symbol also known for bursts of athletic activity. Everyone just wants to hide under a pile of blankets until their energy levels recover.

When their energy does recover during the restless warm-up phase, the appeal of warm-up exercises leads both guys and girls to naturally look toward athletes as role models of attractiveness. That only continues into the following manic phase, when energy levels are on a sustained spike.

With the restless phase having begun this year, expect to see the return of athlete babes in pop culture over the next 5 to 10 years. Judging from history, it will be one from an individual rather than a team sport. Whoever it turns out to be, we do know in advance that she'll be showing off a great set of buns rather than breasts.