Saudi Arabia's trajectory, at the end of its 200-year expansion

Having looked at the trajectory of Israel based on its coming to the end of the Likud era, along with its major sponsors -- US, UK, France -- also coming to the end of their own neoliberal eras, we turn now to the other actors in the Middle East. What stage of their own regime cycle are they in, how do these interact, and what does that portend for the short-to-medium term? We'll start with key player Saudi Arabia, and move onto others like Iran in future posts.

All of contemporary Middle Eastern history begins with the downfall of an old empire that ruled much of the region -- the Ottomans from Anatolia -- and their replacement as the expanding power by the Saudis of Arabia. No other group of people in the region has expanded their territory and influence over the past several hundred years, except for the Arabians.

That struggle began in the mid-1700s, when the Ottomans had nearly encircled the tribes of the Arabian Desert, controlling the Fertile Crescent to their north, parts of the Persian Gulf coast to their east, and the Red Sea coast to their west (the Hejaz). Getting encircled by an expanding empire of utter foreigners has a way of forcing fragmented people to unite for survival. Here's the Ottoman Empire in 1680:

From its founding circa 1750, beginning with just a small patch of land near Riyadh, the first Saudi state began pushing back so successfully against the Ottomans that by the early 1800s they had expanded to control most of the territory of modern Saudi Arabia. After further rounds of failure and success during a second Saudi state, the Arabians ultimately proved decisive in defeating the Ottomans in WWI, ending the empire for good. All that was left was a little more expansion and consolidation, and by 1932, the current Kingdom of Saudi Arabia was founded. From Wikipedia: 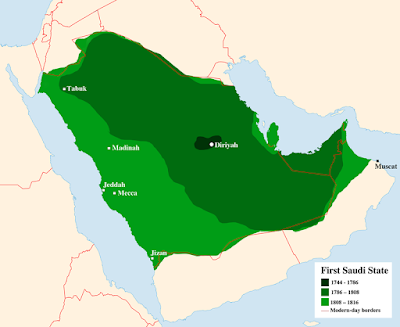 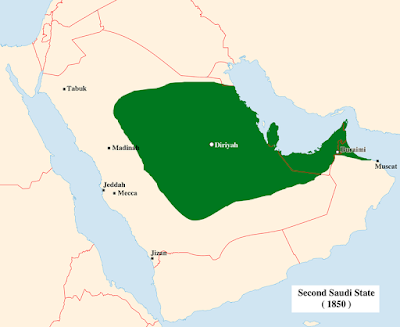 Expansionist states do not last longer than 200-250 years, and the Saudis began expanding during the second half of the 1700s. They reached their territorial peak in 1932, although at least they haven't lost any of it yet. As for their power and influence, however, that peaked under the reign of King Faisal, 1964-1975. That's a solid 200 years of tighter cohesion among the elites, further territorial expansion, and rising power and influence vis-a-vis others in the region and the world.

Since the late 1970s they have entered into a decline that will not reverse, as the original motive for their cohesion -- getting encircled by an expanding empire -- is a problem that has already been solved. With no reason to stay strongly united, they have devolved into competitiveness among themselves, which ultimately leads to state collapse. In that weak situation, they will get picked apart by the long-term power centers of the region -- Persia, Anatolia, and Egypt -- in a manner yet to be seen, though likely with Iran the main winner.

The Arabians have rarely been an expansionary power throughout history -- the last time was during the spread of Islam by Arabian armies, after they'd been encircled especially by the Persians (Sassanians) but also by the Anatolians (Byzantines). As they return to their historical baseline, that means fragmenting back into tribal confederations in the central part of today's territory (the Nejd). They will lose the Hejaz, where key cities are located (Mecca, Medina, Jeddah), as they almost never have controlled it over history. Likewise they will lose the Persian Gulf coast region that is rich in oil, predominantly Shia, and historically controlled more by Persia than by Arabia.

The US partnering with the Saudis during the Mid-20th Century was buying into their bubble at its peak, and we are being dragged down with them as that bubble has burst. For empires in decline, misery loves company. But that will fundamentally change during the next once-every-50-years paradigm shifts within the West, as Bernie in the US, Corbyn in the UK, and Melenchon in France want nothing to do with the moribund jihadist Gulf states. The sooner we cut our losses, the better.