In the post on the restless warm-up phase of the pop music energy cycle, we saw how common it is for people to take part in tightly rule-governed dance fads. The idea is that they are coming out of their refractory state during the previous mellow, vulnerable phase of the cycle, and they need some warm-up exercises to do before they reach the manic phase.

What happens to dance styles once people shift into the manic phase? These are like the real sports or activities that people do after warm-up exercises in gym class. They still have constraints or rules, and they still have a basic tool kit that they employ, but it's more improvisational and whole-body. They're no longer socially awkward, and can "dance like no one's watching" (although they are), and they have sufficiently warmed up with the simplified fads of the previous phase that they can execute more complex and spontaneous sequences of motions.

It's hard to provide examples of this different style since, unlike the easily name-able fads, they aren't so uniform and identical across individuals that you can give it a single name that everyone recognizes. But looking over dance crazes from the manic phase, I did notice one thing that distinguishes them -- the use of dance props like hula hoops, jump ropes, glow sticks, and objects that are usually manipulated by jugglers.

Dancing with props is like rhythmic gymnastics, which is subjective and free-form, and where each performer has their own unique routine or style within a larger hazy yet identifiable genre. It's more difficult for judges to give grades, unlike a highly regulated and uniform kind of dance.

"Rhythm" is the key word here -- the objects aren't just being moved around any old way, or just standing idly by for decoration, but in repetitive sequences that keep time with the beat of the music. During the warm-up phase, people need simple and explicit instructions to move rhythmically: "To the right, to the right, to the left, to the left, now kick, now kick, now walk it by yourself, now walk it by yourself."

During a manic phase, when they're already warmed up, they seek high levels of rhythmic activity, like moving the whole body as well as manipulating one or more objects in time with the music. And doing so in a more free-form way instead of following the simple instructions of the singer / dance-leader. While spiking in energy levels, they're chasing a high -- and they can't achieve that with training wheels on. On the spectators' part, they get more of a rush seeing not just a body moving rhythmically, but a body with objects moving together rhythmically.

Because they require more skill or more extraversion to perform, only a minority of dancers will take them up even during the manic phase. But they will be common enough to identify the time period, unlike other periods in which they were marginal or invisible.

We'll start the survey with the most recent manic phase that is still familiar, the early 2010s. First, there was hula hoop mania. Here is the US search traffic for "hula hoop," which does not settle into a regular annual rise-and-fall pattern until 2010, peaking in 2013, and falling off afterwards:

Search YouTube for hula hoop, or "hooping" as the performers called it, and you'll find most results from the first half of the 2010s. Girls have been uploading videos of themselves dancing since YouTube began in the mid-2000s, and still are -- but the hula hoop videos are concentrated in the manic phase only. They're not only doing simple repetitious round-and-round body movements, but manipulating the hoop with their hands, arms, feet, neck, etc., and not just making it spin around a body part, but tossing and catching it, jumping through it, etc., again more like rhythmic gymnastics.

Then there was the "poi" craze with the Burning Man types -- using each hand to swing a tether with a weight on the end. It was common across all types of props to use high-key brightness against darkness in order to enhance the spectacle -- fire, LED lights, glow sticks, or bright paint. Related to poi was "fire spinning" using other props, like a staff with fire at both ends.

And while not as widespread, there was clearly something in-the-air about jump ropes -- why not? -- that Katy Perry's tour featured them during the dance routine for her biggest hit of the time, "Roar":

These trends extended across a wide range of people, not confined to just a narrow sub-culture. You don't get any more mainstream than Katy Perry's audience. There were performance art types into the fire poi. And every group of girls was into hooping -- country, pop, rock, electronic, you name it. Normies, nerdies, hippies, gothies -- the entire culture was in the mood.

During the previous manic phase of the late '90s, there were the ravers moving glow sticks and glow ropes around with hand and arm motions, along with ropes or ribbons akin to the poi of the next manic phase. The stoner crew were into devil sticks, or moving around a baton using two handheld sticks, which would be revived during the next manic phase. While closer to juggling than dance, the diabolo performances were still set to music. Cirque du Soleil featured the diabolo in three shows from the late '90s, and revived it in 2009 and 2012. 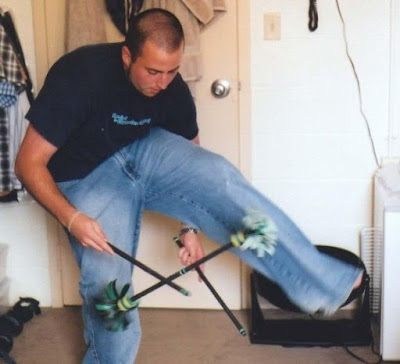 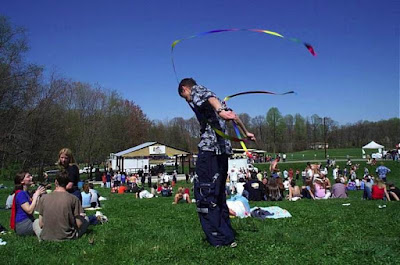 And although hula hoops themselves were not central to the period, the ravers did have long loops anchored at hip level that moved similarly to hoops if they moved their body around. They also wore assorted jingly-janglies around their wrist and neck, which while not manipulated still added rhythmic props. 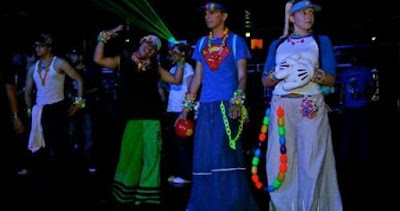 Going back to the early '80s manic phase, the dance prop craze was not as pronounced, probably because people were less competitive and attention-seeking during the Great Compression, which was just wrapping up, compared to the more competitive people of the status-seeking and widening-inequality period since then, including the late '90s and early 2010s.

The main example was jumping rope, especially in a gymnastic or acrobatic way like Double Dutch, although the aerobicizing trend incorporated jumping rope to music too. Before, during the '70s, improvisational and musical jump rope routines were limited to a sub-culture of urban African-Americans, whereas it hit the mainstream during the first half of the '80s (as seen in this retrospective from the Denver Post, fittingly written in 2013).

Although not a widespread trend, here is the no less iconic forerunner of the glow-in-the-dark stick used as a dance prop for electronic music, Taco's neon dancing cane from the video for "Puttin' on the Ritz": 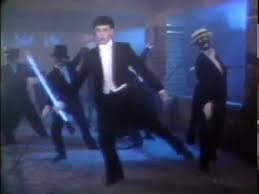 The original manic phase of the late '60s was in fact where the hula hoop craze began. The toy may have been introduced in the late '50s, but it only lasted less than a year, and was not part of a wider music-and-dance craze. See this historical account from the Washington Post. It only really caught on when it was re-released in 1967, when it was also modified to have BBs inside of it, so that it made a rattling sound when moved around (the "shoop-shoop hula hoop"). That made it into a rhythmic musical instrument of its own, much better suited to a period of free-form and free-spirited dancing to upbeat bouncy music. They also dyed the plastic with brighter colors than the original -- LEDs were not an affordable option yet.

This video is from no later than 1972, just after the spike in hula hoop interest during the manic phase of the late '60s, but still shows it being used as a rhythmic dance prop rather than just a toy to kill some time with.

Although the dance prop craze is behind us at this point, there's only a few more years left in the mellow refractory phase, to be followed by about five years in the warm-up phase of color-by-numbers dance fads. So we're still only about eight years away from another rise in interest in improvisational prop dancing, with a peak lying about ten years away. High schoolers who are currently bored out of their minds during this mellow, emo phase will find themselves hula-hooping and fire-twirling by the time they're 25.