One of the major changes that the NRA has made in their propaganda over the past few years is to feature women rather than men as the empowered subjects. They've also made some of them black women, but the change is strictly on gender rather than race, as they have not featured black or Hispanic men wielding guns -- probably not the image the NRA wants to associate itself with.

At first I wrote these ads off as typical cuckservative appropriation of liberal frameworks -- true female empowerment, true women's liberation requires owning guns, or else you're easy prey for the predatory men always roving around out there.

But in the aftermath of the Parkland school shooting, and the deluge of gun nut messaging that kicked in to prevent any talk about gun control, I've noticed that their "girl with a gun" message is something different. It is not aimed at women, but at men.

First, the typical spokeswoman is attractive and portrayed in a highly sexualized and almost fetishistic way -- not a pretty girl in common everyday clothing, or a Plain Jane. The eroticized portrayal clearly appeals to men rather than women.

Second, the guns are typically large rather than the supposed handgun that a woman might realistically carry on her for protection. That appeals to men, who get off on bigger guns.

And to the extent that women do think about these scenarios, it does not involve guns, let alone assault-style guns featured in the gun nut propaganda -- maybe poisoning, character assassination, or hiring a hitman if guns must be used. Women do not get that psychically invested in direct violent confrontation. That's men, especially those who get picked on or are easily intimidated.

I call this type of sexual deviance "latent transgender" or "crypto-tranny," and detailed the profile at length here and here. They are similar to the autogynephile types of trannies, who are heterosexual but who don't want to get physically involved with women -- either from awkwardness or total narcissism -- and who therefore view themselves as the object of their own lust, requiring them to take on both male and female sexual attributes. Unlike overt trannies who cross-dress, wear make-up, and otherwise try to "pass" as women, these crypto-trannies do not, even in secret.

The explosion of the crypto-tranny phenomenon has not been appreciated or discussed much at all. If its symptoms are noticed, the observer tends to write it off as a woman who the guy fantasizes about fucking, rather than a woman who the guy fantasizes about being -- and perhaps also fucking, in that autogynephile way of thinking. They aren't just looking for a tomboy who can hang with the guys, and who happens to be sexy -- they are looking to be that sexy tomboy themselves, and play with themselves.

These are the kinds of guys who unironically confess to fantasizing about "If I were a girl, I'd stay at home all day and play with my boobs in front of a mirror," while feeling aroused in their male sex organ. In their fantasy, they have both huge tits and a hard dick. 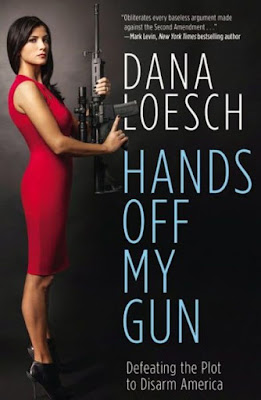 The eroticized rather than a no-nonsense portrayal of the woman speaks for itself, and the large gun gives her a masculine persona. But more than that, they clearly portray the gun as a dick -- it could not look more phallic in the upright position with the base at hip level, nor could the eroticized way that she's holding it.

"Hands off my gun" would be a sexual double-entendre for a man, not for a woman: "This is my rifle, this is my gun; this is for shooting, and this is for fun." It does not represent some kind of sex toy that she would use on herself, since she would be using the gun on someone else. Getting a thrill from spraying bullets out of the tip is clearly more like an ejaculating dick than a toy that women might use on themselves.

What could make better bait for crypto-trannies? How about being a woman who had not just one but two big dicks to stroke while staring at her large breasts in the mirror as she fantasized about violent revenge against bullies? 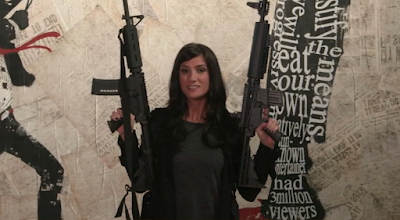 Or the favored fantasy of crypto-trannies that involves someone other than themselves -- girl-on-girl, where the guy does not project himself into the place of a stand-in male, but into one of two or more babes: 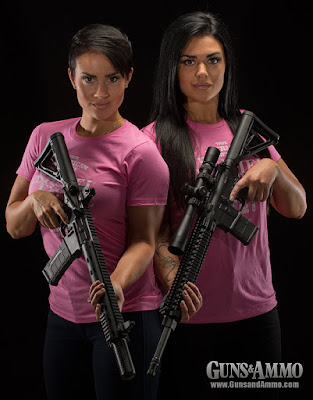 Earlier posts here and here examined the rise of female bloodsports and butt-kicking babe roles in movies as a kind of pornography for the crypto-trannies. Now we can add "gun nut girl" propaganda.

A recent post showed that gun nuts are libertarians rather than conservatives, so it's not surprising to see that they are more likely than the average person to have sexually deviant fantasies -- certainly more so than the average conservative. Libertarianism implies tolerance of all forms of deviance, as part of the larger laissez-faire prohibition on prohibitions.

Like, as long as no one else gets harmed or defrauded by it, then go on ahead and fantasize about being a long, dark-haired babe with big boobs, rocking a red dress and stiletto heels, fondling your big black gun as you anticipate the cathartic thrill of spraying a stream of bullets from its tip. Especially if it's to get back at those bullies who keep messing with you.

Gun nuts never fantasize about vigilantism in the service of a conservative cause in the sexual domain, like shutting down a pornography studio, a brothel, a strip club, a dirty magazine / movie vendor, a sex toy shop, or a gay nightclub. That would fit into their overall fantasy of filling the void left by an ineffectual law enforcement system, only standing in for the police's role as vice squad enforcers. But then libertarians do not recognize the legitimacy of vice laws, so what is there to stand in for, in their minds?

The last popular persona of a gun nut who became a vigilante for a conservative cause was Travis Bickle in Taxi Driver, who shut down a brothel and freed an underage prostitute. He was disgusted by cross-dressers and other deviants he saw every night -- he did not share their fantasies about being a woman or anything weird like that. He just wanted to be the nice protector-and-provider male for the alluring girl-next-door Betsy.

That was right as the gun nut culture was emerging, though, in the later part of the 1970s, when the libertarian approach to politics (deregulation of laws, including gun laws) and morality (consenting adults) began to take over.

We will know that the zeitgeist is returning to the conservative morality of the Midcentury when NRA ads return to themes of being a responsible provider-and-protector male, with scenes of hunting, confronting burglars, and patrolling the neighborhood with a posse when bad guys are on the loose.